MrsValley gave me some rosemary from her garden a few weeks ago and I have been impatiently waiting for 'R' to arrive. I opened my Stephanie Alexander's Cook's Companion and there was the perfect recipe: pizza with rosemary and potatoes. I didn't make my pizza dough. A bakery chain makes a lovely fresh pizza base ( 2 for $4) and the lady serving me said it was ready to be rolled out thinly if I so desired. It has no preservatives so the other base is going in the freezer for later on.

You don't need much rosemary at all, but it packs a delicious punch. I used waxy potatoes, and they cooked perfectly. This is so quick and so tasty I want to make it again straight away!! 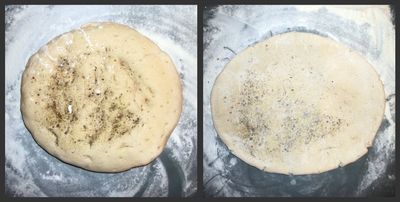 Roll out the pizza dough as thinly as possible. 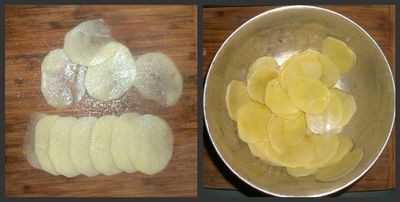 Coat the potato slices with the oil. 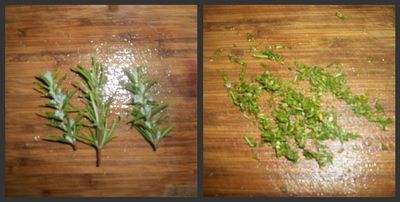 Strip the leaves from the rosemary and finely chop. Arrange the potato slices, overlapping, on the pizza. Press them into the dough a little. Then sprinkle over the chopped rosemary and the salt and pepper. Place on the hot oven tray and bake for 15 minutes. Then reduce the temperature to 200*C, remove from the tray and bake for 5 minutes more just on the oven rack. The edges should be golden and the base crisp. Stephanie says they eat this as a morning snack in Rome, but I could eat it any time!! 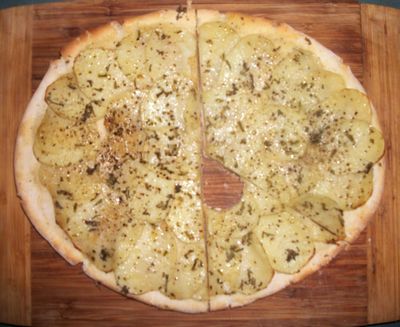 I could eat it anytime too! A favourite pizza of mine. Sometimes we sprinkle it with rocket to serve.

Rosemary has become one my family's favorite herbs. That's a very neat bite out of that slice :) Not a labrador one! Sirius spent some time with labs recently and has started trying to raid the rubbish bin!!!

Yum, looks delicious, and quick and easy to prepare (my kind of dinner!)

I wonder if the bakery chain has a branch near me? 2 pizza bases for $4 is a pretty good deal!

Cindy, I just LOVED the very last picture!
I have a rosemary plant on my deck so I shall try this recipe soon with my recipe for dough.

Oh that sounds delicious! I love Rosemary, and potatoes, and pizza. What a perfect combination! It's something I've got to try!
I had to laugh because of the last picture, with the bite taken out of one slice. :o)

I ate something like this when I lived in Italy. It is gorgeous :) I think I'm going to have to make one myself :)

oh Cindy this looks divine so so so nice and it's 1.46am and I am feeling hungry and go some of this right now. I love the pic with the bite out of it!!!

YUM! I love potato on pizza and your recipe looks perfect! I'm going to try it as soon as I'm not keeping up with current crops in the garden! I'll use Yukon Gold potatoes, they are a nice waxy variety here.

Wow...I would never have thought of putting potato on a pizza. Looks so yummy!

Ooh, I am making home made chips tonight - I shall add some (dried) rosemary to them!

rosemary and potato pizza is one of the BEST pizzas in the world! Yum!