Home Archives Profile Subscribe
Purple Wayne
Ricotta Get Out Of This Place, If It's The Last Thing We Ever Do.

Tuesday's Letters Eat 37: 'V' is for Vegemite and Cheese Scrolls

Vegemite is greatly misunderstood by people who aren't Australian. It is to be used sparingly, and not slathered on like other spreads.

I prefer my Vegemite on lightly toasted white bread (mini white loaf from the bakery at the corner) which is then buttered and lightly spread with Vegemite. I like small triangles or soldiers. I never have Vegemite soldiers with a boiled egg. It is just plain wrong!!

The Vegemite and Cheese scrolls are great, because if you can't find any Vegemite, you can substitute chutney or chopped ham, for example. In fact, the Vegemite was really difficult to spread on the soft scone dough. Perhaps I should have tried My First Vegemite???!!! There is also Vegemite CheesyBite but I have always given that a wide berth as a marketing exercise and not Vegemite canon.

I only made half the recipe, and it worked very well, as would doubling the amount.

Preheat the oven to 200*C and grease and line a tray. 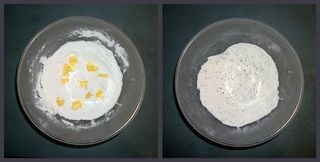 Rub the butter into the flour and add salt and pepper if desired. I just added pepper. 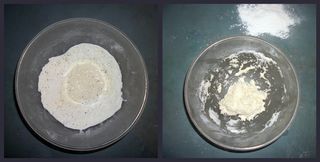 Make a well in the centre and pour in the milk, mix lightly to a dough. 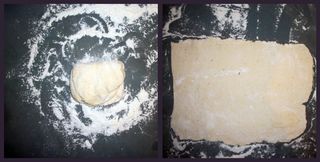 Turn the dough out onto a floured surface and then roll out to a rectangle, about 35 x 40cm. Trim if necessary. I patched a hole with some left over dough.

Spread the Vegemite over the dough and then add the grated cheese, sprinkled evenly but leaving the ends cheese free. Start rolling from one end, quite tightly.

Continue to roll until you reach the cheese free end. I brushed a little water on the dough and pinched the end into the roll to seal it. Trim the ends and then cut into 2cm slices.

Place on the tray, spiral side up and bake for 15-18 minutes. My scrolls took 16 minutes.

Serve right away. Or, keep in an airtight container for a day or two. Delicious!! 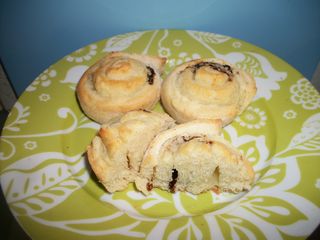 I grew up with Marmite....tried Vegemite once and find it a bit too strong too!!! Never tried vegemite scrolls before but they do look yummy.

Did you mix everything with hand or did you use a mixer?

Just mixed by hand with a fork or knife. I actually just do use my hands!!!

I rub butter in by hand and gently fold liquid in with an oldfashioned broad bladed knife. It's really just a basic scone dough recipe, very easy.

Cindy, when I do this or similar, I have some soft butter and very lightly spread it over the rectangle. The vegemite or other spread then goes on fairly easily.

This is a versatile idea. Tuna mixed with some lemon juice or herbs is great or you can use pizza dough for it if you want to. Leftover vegetables mashed together, some chilli for a bit of zing and any other herbs also works well.

Economical too and filling for a family meal with a bit of salad.

Yum! I LOVE vegemite and cheese scrolls! Of course, I always buy mine (cheating, I know...). I wonder if heating the vegemite a little would help to spread it more easily? I don't think My First Vegemite would be easier to spread - I think it just has less salt but is otherwise the same (except for the price of course! Which, I must add, I do pay, heh!)

I might have to try that recipe out soon. I like mine spread thinly on toast too. I think it is something you have to grow up with to like.

I love Vegemite. When I was young, I love Marmite which is quite similar to Vegemite. I am the only person in the house that eats Vegemite.

I have never tried Vegemite or Marmite, being from the U.S. I hear awful things about it, but I can't say I know firsthand.

What DOES it taste like and why do some people get offended by the taste? What's it made of?

I am also a Vegemite Virgin, and afraid to try it. Of course I don't think I could find any in my neck of the woods, even if I wanted to.
:-D

Oh those look yummy, what a great recipe!!

oh one of my favourite things!! i love watching americans try vegemite for the first time, they lather it on like peanut butter! hehe. there is nothing better than hot white toast with butter and the black stuff. love.

I shall have to make these - what lovely yums for the lunchbox!

Never tried vegemite but I do love marmite :-)