Letter(box) The Devil You Know

I am typing this while I play Youtube videos and listen to Kylie. It is unkind that she is called The Singing Budgie, but I think part of her charm is that she isn't an Adele (see, I do know some modern singers) or a Dusty Springfield. I always feel I can sing along quite happily reaching all the notes. The Pop Princess (!!) has been home to be Hall of Famed.

At the weekend there was a very noisy party over the road, lasting until after midnight, and it was impossible to sleep. On Monday morning my letterbox was missing. I think it had been thrown on the road. I found it, slightly coming apart, on the high nature strip where some kind person had rescued it. I cobbled it together again.

I found a flower growing outside the back door. How it has survived Lorelai Gilmore's hole digging I don't know, but it appears to be flourishing. This has been the House Of Poorliness, there's a thing going around and I had/have it. Mainly it is a headache, fever and sleepiness. I always know when I am poorly because I can't eat. I have had rice cakes with a schmear of Vegemite and tonight I had pretend fried rice. And a banana. Look at the beautiful banana. It is the first banana of the season. I shared it with Peri and Gilly.

And so I have been sleeping, almost non-stop, for the last two and a half days. Luckily The Labradors are good sleepers. It hasn't helped that the weather has been sultry for a few days either. I cut up some chicken breast and added it to their breakfast. Peri dives in nose first and unerringly finds all the chicken. Lorelai Gilmore uses her nose to spread her breakfast far and wide so she can eat all the best chicken parts first. Then the rest is hoovered up. 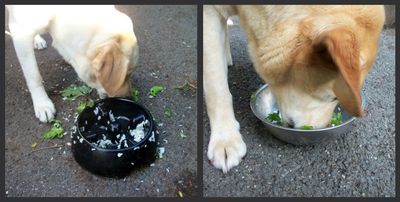 I managed to finish MrsDrWho's Advent Calendar and delivered it this afternoon. Ta da!! It came with mini chocolate bars for each pocket. I hope it has rustic charm. 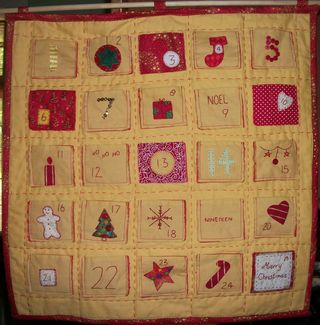 Unfortunately sleeping is not very conducive to cooking, one shouldn't cook whilst asleep: it could be dangerous. So no recipe for Tuesday. Instead, be charmed by Peri and Gilly posing for a close up. Peri's eyes are pretty much better now, she still has an itchy nose. Gilly can fit her whole self into a square photo. She's tiny!! 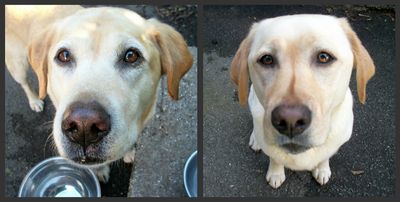 While I have been using the internet for the last half hour or so, Google Reader wanted my phone number and then Google Search insisted I upgrade (and I think they are using the term incorrectly in this case) to Google+. I shan't do either. I am sure Google will go on without me. I have lots of blog reading to catch up on. Maybe tomorrow....

And now I shall make a cup of tea, take all my tablets and then a lot more sleep is called for.

Awe first flowers! First banana too, how lovely. Every dog has different eating manners in our house too. :o) I love the two photos of the girls at the end of the post. Made me laugh, when you said Gilly fits into the picture frame. Those photos always look so funny with a big head, and tiny feet. :o)

Oh, NO! You are unwell again! Take care of yourself, please. And for someone unwell, you do get a lot done. Lovely advent calendar. And I am sure after a yummy breakfast (and all the hard work of sorting and eating it) the girls are happy to snuggle and snooze!

I hope you feel better very soon. Your advent calendar is beautiful!
We have had bananas for months here but I have had to close my eyes when buying because of the terribly high price in the shops. They are my favourite fruit to take to work.

gets lots of sleep and feel better soon!!

i hate when people destroy other people's things just because they find it funny :/

Hope another sleep has boosted your recovery.

Love the methods of eating from the Labs. My niece had a Boxer for many years. He ate everything, every thing, that is, except peas. His bowl could have one pea, meat, dog food, lots of veges and leftovers, rice and kibble and rolled oats. When he had finished, that one pea would be in the bottom of the bowl. Invariably. He too was like a vacuum cleaner with his food so we could never work out how he managed to discover pea and leave it.

yes. more sleep. i hope you feel better soon. i love how the dogs know theres always something Better in the bowl somewhere. very cute pictures of your lovely girls.

The Budgie.....ahem Kylie is popular here too.
Im sorry you have been ill again,hope you are speaking on all fours again soon.

Pity that your letterbox had to suffer from the excess of 'high spirits' as they say....
Your flowers are Johnny-Jump-Ups, also known as Heartsease, also known as Viola Tricolor. I love them - they are quite tough, and if you let them seed themselves without too much redigging by dogs, they will form quite a large clump of cheerful flowers next season. Also the little three-lobed seed pods are fun to pop open!!
I shan't torture you with tales of how cheap Hawaiian bananas are over here, but we are eating plenty of them, and turning them into cakes and muffins too!
I hope you feel much better soon - get lots of rest!

well it seems that Mre Electric and I may have this little bug too. We have both been complaining and whinging and whining about our headaches and fatigue too. There are little bursts of energy for about an hour and then total exhustion for three or four. I hope you are feeling better soon. Ooh ooh ooh its December......I love December......We got to start our advent calander tonight!!!!

The advent calendar is fab! I'm afraid I took the easy route and bought one. But I plan on making decorations to out in each pocket, so we can progressively decorate our tree with them. Hopefully Connor will find that exciting in years to come! For a few years at least!

Mmmm bananas! I have been buying them at the crazy prices, for Connor, but it is so nice to finally see them in the shops for a reasonable price. Now I can eat them too!

I am so sorry to hear you aren't well - I hope the Dorables are being very good nurses and looking after you properly. I have just been visiting your blog for the first time in ages (hangs head in shame) as Husby neeeeeeeeds the recipe for the gorgeous fudge - which he has managed to eat most of! I am so glad you liked your pressies - I love mine - we are using the Christmas counter downer as a holiday counter downer - and once we start actcually counting down, the lollies will go in the pockets! To do so early means disaster! The lovely Dalek bag has already been pressed into service - I adore it! Get better soon!
Cxo

I'm so sorry you're feeling ill, again!! :-( At least you have your letterbox back together and those pretty Johnny Jump Ups (aka Violas) to make you smile. And the girls always do their part. :-)

In our old house our letterbox used to get smashed in every week!! Thank goodness here our only damage that has occurred was caused by our tree loppers.

Isn't it lovely when you find something like your little viola that is thriving against all odds....lifts the heart doesn't it!!?

I hope you feel better soon Cindy....we've had some bugs here too :(

I hope you feel better soon! Lorelai Gilmore's eating technique made me laugh. I am suffering from sleeplessness when I should be sleepy- I think thatit is jetlag or possibly coming home to a list of things that must be attended to!
That is such a pretty flower, it is a delight to find little treasures like that isn't it?

Hope you are feeling better. I also had my 1st banana last week when the price is more reasonable. The price went up to $20+ a kilo & last week it was $5. I miss my banana smoothie so much.

Hope you are feeling better. Sleep, bananas and puppy dog pats are all good cures for feeling poorly. The viola looks beautiful too, they are such happy flowers!

Hope you are feeling a lot better now. The advent calendar is totally brilliant - I bet she loves it. Those labs are so sweet - I love their faces.

you do sound like you've been under the weather - or at least you were at the time of this post which I am awfully behind on.

I agree about the use of the word 'upgrade'. There's nothing to upgrade to with Google + which is just a different space, not a better one, and best made do without I think!