I just love Tom's Midnight Garden. I didn't read it when I was a child, but when I was at College/Uni. My teacher training was a bit unusual. I went to the TCAE for a year or so, and then College moved to the Uni campus in town. We kept our College tutor and lecturers and had classes in both places. In the end it was the better College course with the bonus of a widely recognised Uni degree. I digress, as usual. So, at College we read loads of children's literature as part of English as a Language. I don't know how I missed reading Tom's Midnight Garden, The Chocolate War, The Eighteenth Emergency, Stig of the Dump, The Machine Gunners, The Silver Sword, and I am David, for example, before then*. I still find Children's or YA fiction is often of a much higher quality than Adult fiction.

Back to the garden. Once again the Befores :

Became the almost matching photos of The Afters: 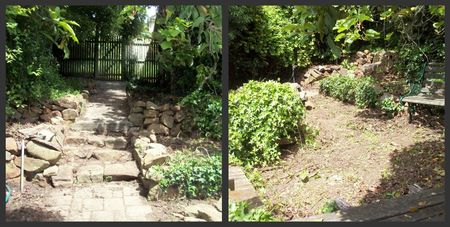 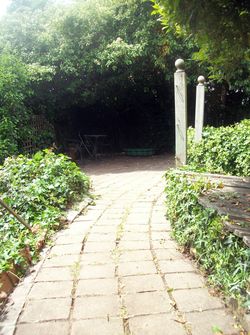 Courtesy of the wonderful Uncle and Auntie Dutch. The garden, and I use that term loosely, had been OK until the last three weeks or so when we had quite a lot of rain and very warm weather. The weeds went wild.

Peri and Gilly had a lovely time all day, from about 9am till 2pm. There was a lot of paddle pool play. Gilly has a special lying down action to get the maximum wetness. Peri just likes to cool her feet. 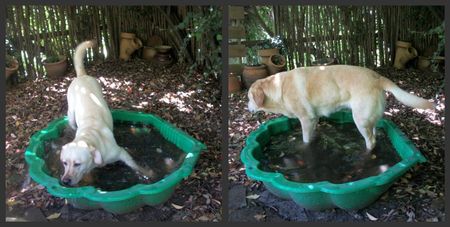 You can see all the leaves that later disappeared!!! I can't garden but I did cook some sticky gingerbread cake, raspberry brownies, sausage rolls and some filo pastry quiches which I sent home with my grateful thanks. The Dutches are fabulous to give up their time to help clean up our garden!! I was worn out and I didn't really do anything other than go up and down the stairs and sit and chat.

There has been an awful lot of sleeping since then and a lot more to come. I must be up and about in the morning because tomorrow I am off for my annual dental check up. I hope I just need to have my teeth cleaned and nothing else... 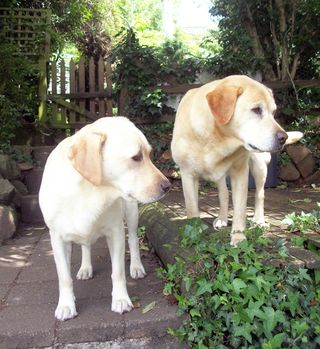 The Advent Calendar embroider is going reasonably well, though a sequinned 7, and another below 10 number, is missing. It's Gilly. I caught her tearing a hole in the 6-10 bag once and thought I'd saved it. Obviously not. 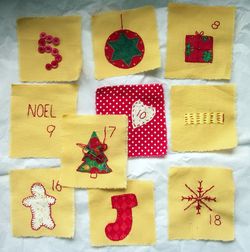 The new Colette Sewing Handbook arrived this week. It has five patterns included: three dresses, a  scalloped skirt and a wafty blouse/top. 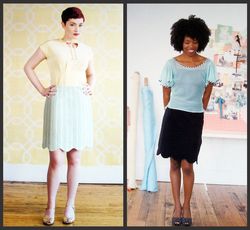 I really like the way the spiral binding allows the book to lie flat. It's much easier to use.

Peri and Gilly are asleep and I think that's an excellent idea. Maybe I should have some lunch. Maybe just a snack because I'm going to MrsDrWho's for tea. Snack, then nap I think.

I LOVED The Chocolate War by Robert Cormier when I was a kid. It was one of my favorite books.

And you're right; YA literature is most definitely better than adult literature sometimes.

CIndy, loved the before and after photos. Such good friends you have. It makes me happy to know you have on the spot friends to help you as well as those of us floating around in cyber space.

I seem to remember Stig being real aloud as a serial on the ABC early on Sundays many years ago. My boys enjoyed it and others like it while cuddling in bed with us on a Sunday morning.

what a lovely declutter in the garden - so glad you have that help and you can enjoy the quiet green spaces again - the girls looked particularly happy with all the efforts too !!

I might have to read some of those books as I havent heard of them before. The garden looks so much better, how lucky you are to have such wonderful people who will do that for you. I love the pics of the labs in the pool, they look like they love it!

I love the war books (I am David, the Silver Sword) but I cry like a baby when I read them. Thanks for reminding me how great they are.

Gosh the Dutches did lots of work! And so did you, in the kitchen! A lovely way to say thank you.

What a beautiful garden! The Dutches are wonderful people to care for your garden.

The girls are having a great time in their paddle pool - the only way to keep cool on a hot day.

The Advent calendar is lovely. Look forward to the finished photos!

I really do love children's books as their illustrations are superb. I will have to keep an eye out for some of those young adult's books, another genre I'm interested in.

The Dutches are such kind and lovely people. I confess I did laugh a bit when I read about Gilly tearing a hole in your bag with the advent calendar in. Dogs, eh? :)

The garden looks so inviting! What a great place for the labs to play. Things are looking very brown and gray around here as we head toward winter, but the dogs can still sun themselves outside for some of the day.

Lovely garden when it's cleaned up. It's amazing how fast everything overgrows! The labs look happy. Have a lovely nap!

lately more YA books that I have read have been a lot better than "adult" books. Not because of the easier read, just seem to have a better story

lol at gilly in the pool, surprised she doesn't just lay flat in it or do rolls in it tho to get wet :p

Wow, the garden is looking lovely! Must be very nice for you to be able to sit with a cup of tea and enjoy it :)

I hope your dental appointment goes well.. I'm really overdue but there are only so many things one can fit into the day/week/month/year!

Wow, the garden looks great. Gardening is hard work & I have not been able to do much too as I have arthritis. I really miss gardening.

i wish all knitting books came spiral bound, so much more convenient. your garden looks lovely. i would happily come do it for you too if you cooked me lunch like that! hope you got some sleep and are feeling ok today.

Hi, how tall are Peri and Gilly? I noticed that Labradors in South East Asia, Australia and New Zealand tend to be much smaller than the USA ones! Hope I am not generalizing and offending anyone ^_^

I like spiral bound book for this reason also. What are you going to make first from the patterns?

Your embroidery is looking very nice. You should finish it with plenty of time :)

You can tell Auntie & Uncle Dutch from me that I think they are bl$#%y marvellous. They are so kind to keep up with your gardening for you! Friends are such a precious resource aren't they!?

Peri & Gilly both look funny in the paddle pool LOL Both our dogs won't stoop to getting their feet wet now we have ducted A/C....particularly Daisy who dosn't even like getting her feet wet to go out on the grass for her wees!!