A Bunny Thing Happened on the Way to the Forum

I saw some Bunnies and the kind blogger at JustAnotherhangUp emailed me the pattern, she will if you ask her too!! I made the Bunnies for Lucy and Zoe. In some rather good news, a bone marrow match has been found so Zoe and her family will be off to The Mainland later in the month for a transplant. We cannot thank the people who donate blood, bone marrow or their organs, enough. Thank you. Thank you. Thank you. 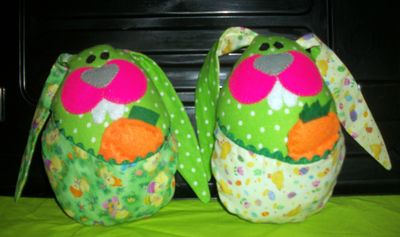 Peri Naughty and Lorelai Gilmore have still not quite come to terms with the demise of Daylight Saving this year. Round about 6pm they have now decided to play rough and rowdy rebel games, play biting each others ears and legs and then jumping on the bed!! I had to shut the hall door and be cross. Well, I cannot be too cross because they are so cute when they play. 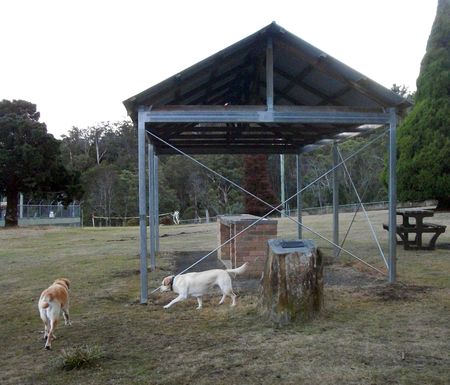 A few days go I spied some inordinately cute biscuits on Toni's blog. I was inspired to have a go at making some myself. I used a double batch of Nigella's Cut-Out Biscuit dough and then just tried to bunnify the 43 oval biscuits. The dough needs to rest for an hour or so in the fridge, so I think that anyone pushed for time could use Milk Arrowroot biscuits as they are the perfect shape. I had a go at outlining with icing and then flooding with a runnier mix and I bought a pen that writes edibly on icing. I feel very cake decoratory!!!

Cream the butter, sugar and vanilla until it is pale and the sugar is dissolved, add the eggs one at a time, mixing very well.

Sift the flour, baking powder and salt and then add the creamed mixture. I folded it in at first with a spoon, but then it was just easier to use my hands. 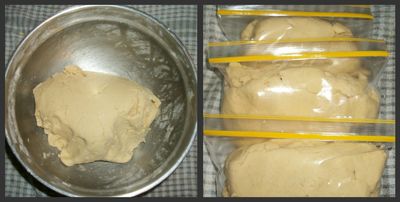 When it comes together as a nice smooth dough, put it into a ziplock bag and refrigerate for about an hour.

When the hour is up, preheat the oven to 180*C and grease and line some trays.

Roll the dough between two sheets of baking paper until it is about 5mm thick. Cut out egg shapes, my cutter is about 5cm long and leave space between them as they do spread a little.

Bake for 12 minutes or so, turning the trays and swapping shelves half way through. The biscuits are ready when they are golden brown around the edges. Cool on a rack.

Make a small amount of icing with about 100g of sifted icing sugar mixture and a little lemon juice. I made it reasonably stiff, used a ziplock bag with the corner snipped off and piped an oval outline around the edge of the biscuits.

Then there is the waiting. There is quite a lot of waiting, for the icing to dry hard.

Make some more icing with about 200-250g of sifted icing sugar and lemon juice and pipe it sparingly into the biscuits, the little edge of icing acts as a dam. The spread the icing out to the edges very gently with a flat knife. Pop a tail onto the 'tail' end of the biscuit, I put the cut end of the marshmallow into the icing.

The there is more waiting. If you try to pipe ears on now they will sink into the white icing. Ask me how I know.....

I took the leftover white icing, added more icing sugar and one drop of pink food colouring and not knowing what I was really doing, piped 'ears' onto the bunnies.

Then I waited . At last I could draw on two little eyes. 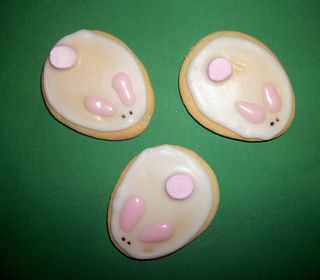 They are not a patch on the gorgeous tiny bunnies,  but I think they are cute and sweet!!!

I think they are cute and I love the little ones you sewed. You could make a bunny cake quite easily. Basic cake mix or sponge done in two sponge round pans. One pan becomes face. Cut two ovals from opposite sides of remaining cake. These are ears. Remaining bit becomes a bow tie under the chin. This needs to be done on a tray or large baking sheet or cake base. Ice, I've used coconut for fur and make eyes etc.

Those labs think any attention is better than none. If you won't feed them, they'll get your attention another way. just like children?

I love the bunny biscuits!

I'm glad you explained about icing sugar mixture having cornflour. I've always wondered what the difference is between it and pure icing sugar (which is what I usually use!).

And such good news about the donor and transplant! I hope all goes well when the time comes.

The bunny biscuits are so cute!! Too cute to eat. :)

so many posts to catch up on, so many things you have made, I love these biscuits very cute and way beyond my patience level, I get grumpy all the time lately and want things done straight away I can't concentrate anymore, and yes our doggies mope around thinking they are being starved and I give in and feed them earlier. I love your Star Trek Book it is fab and the bunnies you made - wonderful and happy and bright. I had a giggle over your shoe and I am sorry because I know it's it's not a laughing matter. Did you get another pair? All the baking you have been doing has made me hungry, the Stout Cake looks stupendous. I hope you are keeping well hugs and kisses from me, Ruby and Louie

what wonderful news for Lucy and Zoe's family !
I love all the 'bunny' business - maybe the girls are just joining in the Easter fun :)

both bunnies are cute :D i love that green fabric :)
i got that recipe you emailed me, will have to try it soon :D

You have done an amazing job with both bunnies. They are so cute. Have a good Easter holiday.

The bunny biscuits look so delicious. I love your 2 bunnies, they are so cute. What wonderful news for Zoe too, I hope everything goes very well for her transplant.

May all go well with Zoe, and may Lucy soon find a donor as well. I know they'll enjoy their cheery Easter bunnies!

The fabric bunnies are just too cute and the baked bunnies are looking mighty adorable, too.