A Tail Of A Fateful Trip

Lorelia Gilmore was back at the vet yesterday with the same symptoms as before, and we saw Dr Marion. She decided there should be x-rays today and so there were.

Peri sat in the car and Gilly went not-very-happily round the corner into the corridor, and we drove away.

Peri and I went for a walk, 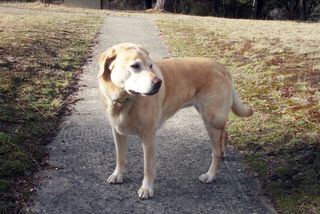 cooked some lemon and blueberry syrup cakes, watched some TV, did some washing, ate some carrots

and an apple and then I went to the vet to collect Gilly. 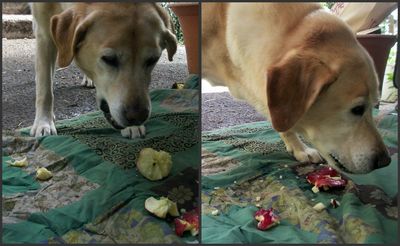 I saw Dr Rob and he showed me her x-rays. She has some small deformations of the ball joint of her hip and slightly bowed tibia, but what she mainly has is the first tail bone almost at right angles with her spine. It should be level with her spine. She has a very mild case of Lumbosacral disease. On a scale of 1 to 10, she's most likely a 1.

"Symptoms include progressive sharp lower back pain, hind leg weakness, difficulty urinating or defecating, a shuffling gait, and vocal expressions of pain ranging from whimpers to cries and howls. A dog suffering from this disease may be reluctant to rise and jump. In an attempt to alleviate the pain, the dog sometimes chews at his tail or back legs." (1)

As she gets older the disease will need to be managed closely with pain relief and anti-inflammatory drugs, however she has lots of positives on her side: she is very fit, thin, very healthy in every other respect, thin, athletic, thin and brave. She is quite stoic and is able to deal with quite a lot of pain before it affects her, which is typical of the Labradors at our house. They'd given her some pain relief after the general anaesthetic, and Dr Rob said she should have been drowsy and slow, but she was jumping about and happy and full of joy to see me.

He said she should go for walks on her lead as she really should exercise and use up some energy. Although I had a little cry at the vet yesterday and I was worried today, I think I am coping well under the circumstances: there hasn't been any sign of a Georgette Heyer or a Florence Nightingale decline.

I asked if I had done anything , or if Peri jumping on Gilly could have caused it and Dr Rob emphatically said no, that it was something she was born with. It isn't hereditary either, so I can still have a new puppy from the same breeder. It is just bad luck. Poor Gilly, Poor Harki, Poor Tori:  lots of Labrador bad luck. Peri's pancreatitis is held at bay by her awfully strict diet and lots of exercise!!

I think that I am lucky to have such wonderful Labradors and I am glad to look after them in any way necessary, because they are so lovely, and now I am having a little cry because I feel lucky to share their lives. 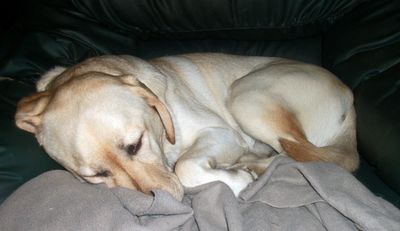 I'm really glad I know what's wrong and that it can be managed successfully. And Gilly won't need to be in pain or sad. She's having a nice sleep now after dinner.

Ages ago I won a fabric softie panel from Saffron Craig. Here, at last, is the cute pink puppy which I have had for ages and finally gave to Toddler Lucy on Saturday: sooooo cute!! 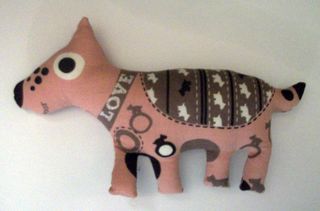 Oh my goodness. Your title had my heart in my mouth!

I'm so glad she is ok and it's all manageable

I hope you little released some stress.

It's the Gilligan's Island theme, please sing along happily, and not breathlessly!!!

Just sit right back and you'll hear a tale,
A tale of a fateful trip
That started from this tropic port
Aboard this tiny ship.

The ship set ground on the shore of this uncharted desert isle
With Gilligan
The Skipper too,
The millionaire and his wife,
The movie star
The professor and Mary Ann,
Here on Gilligan's Isle.

I was a bit worried too when reading of the second visit to the vet but am relieved it isn't worse, although I am sorry that Gilly has this disease, poor lovely Gilly. I am glad it can be managed and pain relief is available, an animal in pain iscan awful thing.

Hugs for you and smiles that it is all good.

Oh, poor Sweetie! Well it is good to know what it is. If you are like me, not knowing is NOT good. I can imagine all sorts of things I shouldn't! The Labradors are as lucky to have you as you are to have them!

:( i'm glad the vet figured out what it is, but really sad about it :(

oh no, im so sorry to hear about poor gilly. thank goodness you have such great vets. and that it can be managed. still, i would have had quite a long cry myself. i was just thinking the other day that i am very grateful my three have been vet free for quite some time. the exercise really helps i think. big hugs from me xx

Poor Gillie! So unfair for such a good dog. At least now that it's been diagnosed she'll be able to be treated and comfortable.

The doggies are soooooooo lucky to have you. I'm just so glad Gilly is ok and like you said, she's only on the scale of 1 :)

Don't worry too much because your love will make them so much happier :)

So sorry to hear about what you have been going through. Poor Gilly but I am sure you will give her the best of care. Take care of yourself too.

Oh poor Gilly!! It's so horrible I know when there's something wrong with our 'dear ones' :( I'm so pleased that you've found out what is wrong Cindy. Daisy had to have a knee reconstruction when she was 9 months old....it's awful to see them in pain isn't it!?

That little softie is soo cute & going to a good home too! :)

One of my dear friends has a doggie that has seizures and he is the only one of the litter with it. I thought it was appropriate that she should have him as she looks after him so well that he does have a very cherished life. I think that is the very same reason that you have those wonderful labradors in your life, because you look after them so well and they have a wonderful life which otherwise could be very painful. I do hope that the medication helps a lot so the pain does go. Your little softie is very cute.

Poor Gilly! and Poor you! At least it is something that you know to be careful about with the poor girl.

I'm sorry Gilly has this disease and I'm glad it's manageable now. I am sending you all lots of hugs.

so glad that you can manage her pain now, poor pup...

she looks so sweet sleeping!

*big squeezey hug to you*

Well, it is a comforting thing to have the certainty now of what it is that is afflicting lovely Gilly, for with that comes the surety that it can be managed, what to do and not do, and all the knowledge that will help banish the anxiety monster and keep worrying lower than if there were symptoms of who-knows-what. Thank goodness for friendly, helpful, experienced vets who genuinely care for our fuzzy friends.

You are SUCH a good Mama Bear, Cindy, and your love, affection, positive spirit, and care gives your doggers better quality of life than a dogger with no disease would have with a non-Cindy person!

Well dang, but at least it is manageable and treatable and Gilly can still have a most enjoyable life. But dang. I don't blame you for being sad at all.

Ow, my own tailbone is hurting in sympathy reading this story! Poor Gilly (and poor you) - glad she will be ok though.

I am so happy Gilly can live happily and be treated I was sooooo worried when I saw the title of this post.....phew, she is a brave girl

I am loving the osund of the Fiona McIntosh books I am really horrified to have to tell I have not heard of her but now I have thanks to you. I LOVE books and movies set in WW11 especially if they are in France so I must check out her new book. When I am in the mood for reading again that is. A terrible thing has happened recently and that is I have not had a lot of patience for reading. I love reading so I don't know why that has happened. I hope you and your girls are happy. I feel the days are muggy every day, is it just me or are they? I was filled with hope with that cold snap a couple of weeks ago

Oh, poor Gilly! Thank goodness the vet worked out what it was so that it can now be managed without Gilly needing to be in pain any longer. She is very lucky to have such a supportive Mum who is there to help her in any way!! Hopefully her healthiness, fitness and skinniness help to keep it at bay for a long time yet.

Oh noes, poor Gilly! How miserable for you all. I hope you're all managing OK. Drs Petal and Griff send solicitous licks xxoo

Oh! You're such a good doggie Mama - to worry that it was something you did is heartbreaking. Your girls are the happiest, most active dogs and that's what keeps them fit and trim. Maybe an occasional treat doesn't hurt, either. ;)

Hugs to you and the girls!