Home Archives Profile Subscribe
How Sick Is That Doggy In The Window???
A Tail Of A Fateful Trip

Today I cooked Apple Pudding Cake. I saw Maggie Beer making this on TV in an Easter Special from the Australian Women's Weekly, where the recipe appears. She certainly made it look fast and easy. It is not. This cake takes a good hour, at least, to get into the oven and then there's a syrup to make.

I followed the recipe religiously. I managed to find some verjuice and fresh rosemary, but after 40 minutes of cooking, the cake batter was still runny. I chipped a hole in the top and cooked it for another 15 minutes, and then I was worried it would burn so I just decided that was enough time. The cake sank quite a lot and it is not high or perky at all. I don't know what went awry. It tastes so nice, really unusual and fragrant, but there were so many steps and a lot of standing around watching liquid and sugar boil.

I changed the order I made the cake too, I did the apples before the caramel for the topping, as I was worried the caramel would burn before I finished slicing the apples.

Verjuice is the un-fermented juice of semi-ripe grapes and in this recipe I'd substitute a good apple juice and some lemon juice, other substitutes include white wine vinegar and sherry.

The magazine says that preparation and cooking time is 1 hour and 10 minutes, that means I should only have taken 30 minutes to get it all together and I did not. I was working really hard too. The recipe also says to preheat the oven before you begin cooking, but that is a waste of power, do it when you start beating the egg whites, it will be plenty of time!!!

I don't think this was my finest baking hour. You should only attempt this when you are in tip top form and have at least an hour or three to spare.

I am quite worn out now so I may not have edited very carefully. Please excuse any errors.

Grease and line extra well a 20cm cake tin, I used a springform tin, and bring the baking paper about 3cm above the edge of the tin.

Half fill a bowl with cold water and a decent squeeze of lemon juice. Don't peel the apples, quarter and core them and then cut into 2mm slices (1/12 of an inch??) 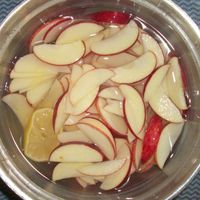 Put them into the bowl of lemony water and it will stop them going brown while you make the caramel.

Put the verjuice, sugar and rosemary for the apple topping into a pan on medium heat and stir gently till the sugar is dissolved. Then bring to the boil, add the drained apple slices and turn down to a simmer. Cook for 4-5 minutes, remove from the pan, along with 1/4 cup of the liquid to use in the cake batter.

It didn't say what to do with the rosemary, so I left it in the pan while I brought it back to the boil and reduced it until it was a golden caramel colour.  Have the extra 2 tbspn of verjuice ready and put the apple slices back into the pan and cook gently to add some colour. It's a fine line between adding colour and having the apple slices disintegrate slightly. 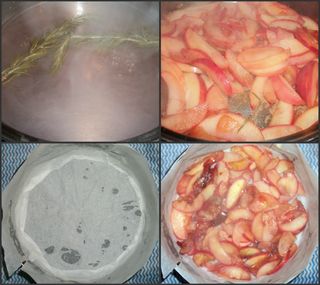 Remove the rosemary and add the extra verjuice to stop the caramel from going too brown, and then arrange the slices in the base of the tin. I arranged mine by plopping them in and smoothing them out. I didn't have the time or patience to arrange 100 or more thin slices. Set aside and now make the pudding/cake batter.

Separate the eggs, I usually put the whites in a nice clean ziplock bag, and then put 1/3 cup caster sugar with the yolks and beat until they are pale and creamy and the sugar is dissolved. This will take about 5 minutes.

Sift the flour and baking powder together. Add 1/4 cup olive oil to the reserved apple/verjuice from the apple topping. Fold the flour into the egg yolk mixture and then gently add the olive oil and juice. Set aside. 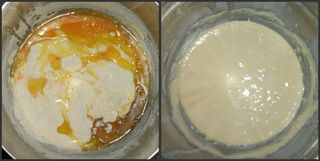 Using very clean and dry beaters and bowl, whip the egg whites until soft peaks form: when you lift the beaters out a peak forms in the egg whites but the end will flop over. Then add the other 1/3 cup caster sugar gradually as you whip it to make a glossy meringue. This will take at least five minutes before all the sugar is dissolved. 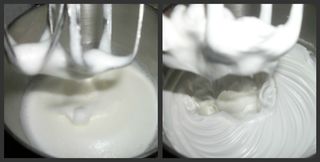 Very gently fold heaped spoonfuls of the meringue mixture into the pudding batter. It will be a light and fluffy mixture, and it almost filled the bowl I was using.

Pour the batter over the apple slices, smooth the top and cook for 35-40 minutes. Mine took 55 minutes and I am still not sure it was cooked. The only check Maggie gives is that the top will spring back when pressed. It did that at 40 minutes but I could see the batter underneath was not set.

Cool in the tin for 5 minutes and then invert onto the serving plate.

If you want to make the syrup, gentle stir the sugar, rosemary sprig and 1/2 cup of verjuice ( keep the rest for a caramel emergency: I had one) over a medium heat until all the sugar is dissolved and then bring to the boil and cook until it is a dark caramel. Remove from the heat add the rest of the verjuice to stop the caramel cooking and take out the rosemary sprig.

Pour the syrup over the cake and serve with thick cream. 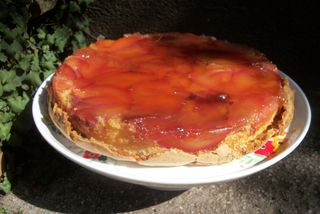 Oh, that looks like a lot of hard work for such a tasty cake!!! I like to experiment with new recipes but when they assume I know more than I do, it gets frustrating; beginner/intermediate things that don't take too long to prepare work out best!

Ate a piece this afternoon. Was very nice but I found the rosemary flavour a bit strange. The apple and the base where yummy.

woowh that looks great. I dont think I am good enough at cooking to try it.

It looks delicious but all that work and all those dishes afterwards!! I think I'll put that in the one day file. I made sticky date puddings tonight, much easier and super yummy! Also, one of both of our favourite desserts!

That sounds like a lot of work but the cake does look nice.

It does sound delicious, and looks very tasty (I do love an apple dessert, caramel just takes it to the next level for me!), but I generally prefer to make cakes that are a bit less fussy. If it makes more than one (or two at most) bowls/saucepans dirty, then I probably won't be making it. Unless a very special occasion!

It does look so delicious though...

oh my goodness! that really looks spectacular. i love maggie, complete with her verjuice addiction! im going to make this this winter i think.

That looks really nice but the recipe certainly sounds fussy.. even the eggs are separated. Massive clean up job at the end. Now where did my mothers quick mix cake recipe get to?

Well not the same but very easy..

Good gracious, a labour intensive baking mission!
Looks scrumptious though, i hope it was tasty :)