How Sick Is That Doggy In The Window??? 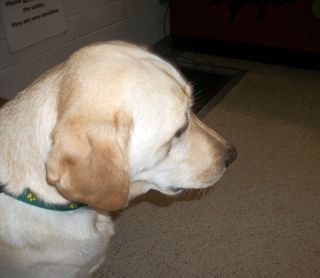 Poor Lorelai Gilmore was very sick yesterday. Just after lunch I noticed she was sitting strangely and then she wouldn't, and couldn't, walk up the steps. I didn't panic, and tried to entice her with a biscuit, but to no avail. So then I did have a little panic and we went straight to the Vet, even if it was their lunch time: Dr Tim saw us immediately. Luckily all her vital signs were good and there was no back or joint pain but she did yelp when she hopped out of the car. Dr Tom said he thought she might have an upset stomach or very bad wind(!!!) or tummy spasms. He gave her two injections, an anti-inflammatory and an opiate and said to ring back later if she wasn't well. We all had a sleep, me with the help of some Rescue Remedy, for three hours and then she woke up and started to whimper and cry all the time and that was it.

Back to the Vet we went, Peri in the car too because she was not being left behind. We saw Dr Liz and she checked Gilly again and concurred with Dr Tim. We went home with some Tramal and in half an hour or so Gilly stopped crying. She ate a little chicken and rice for her dinner and then we all went to bed. Peri was full of jumping and leaping because she had to sit in the car outside at the Vet and was still feeling left out.

This morning Gilly ran up the steps outside and we went for a walk and she ran with Peri and Sandy and seems pretty much back to normal. Not 100%, maybe 90-91%. I am so relieved and need a Bex and a good lie down. 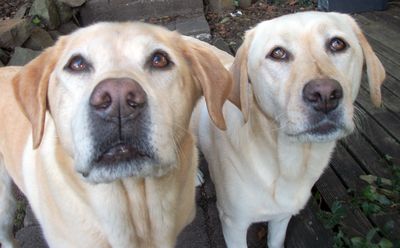 I heard on the radio this afternoon that Bob Brown has resigned as leader of The Greens and will retire from The Senate in June. My earliest memories of politics are of Gough and Bob. Bob Brown changed the world and he formed Australia's first Green Party. I think he has made a difference, and though he can polarise people, I agree with the general philosophy of The Greens: looking after the Earth, her people and fauna and flora. Happy Retirement Bob!!

I have a new cook book by Sally Wise. It has lots of cakes and slices, biscuits and desserts. Some are very old fashioned and some brand new. I shall cook something from it very soon. 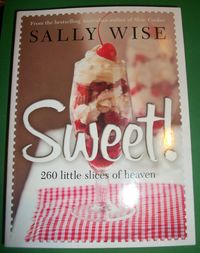 And I bought some nice Easter biscuit cutters on sale. They make nice 3D impressions on top of the biscuits when you cut them out. 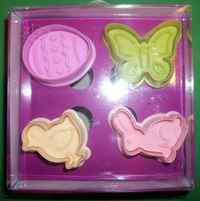 So once again it will be Friday Food on Saturday. I'm making Maggie Beer's Apple Cake with verjuice. The woman is obsessed with verjuice and I found some in the supermarket, so it's Kismet!!!

Poor Gilly and poor you. That must have been very scary. One son had bad stomach spasms about 18 months ago and was in agony and taken to hospital. They gave him specific analgesic but he still looked green when he came home after a day and a half there.

I hope she continues to improve and never have it again.

Glad your girl is better and I very much enjoyed seeing you today.

Oh my goodness I am so happy that Gilly is okay. You must have been very worried that it was something worse. Hope you all get some much needed rest and cuddles. Love your new cookbook. I have never used verjuice to cook with but it must be something nice. Isnt it made from grapes. Love your cookie cutters too, very cute. Hope you all have a wonderful relaxing weekend.

So glad Gilly is alright and it's nothing serious. I hate animal health scares!!

I have never cooked with verjuice, so I'll be reading your Friday Food on Saturday post most interestedly.

So pleased Gilly is okay. Our four legged friends are so precious.
Your new cook book looks wonderful - have fun!

So glad Gilly is OK. I hate when the babes are sick. But unfortunately, I do know how bad those tummy aches can be!!

Poor Gilly. I'm so glad she is ok. I bet you needed a bed and a good lie down!

Glad to hear that she is ok. Poor you - it is horrible when they feel ill.

I'm sorry you had all that worry with poor Gilly, and glad she is feeling better.

I was surprised to hear about Bob Brown too but hope he enjoys retirement. I suppose it is a good thing to have a renewal in the party that a change of leadership brings, even the best leader can get a bit stale after so long in the same position (not that I think that is the case here, I have no idea).

I shall be reading your Friday food posted on Saturday on Sunday! (if you can follow that!)

my wombat cattle dog has had that once or twice, the vet said it was tummy pain from undigested bones etc. it was scary though, he acted like he was paralysed! im glad they are both well and happy again xx

Not enticed by a treat? You know she was poorly! I'm happy to hear that Gilly is better and do hope that she is back to 100%!

Oh yuck, it is so awful and gut churning when our diggers are under the weather :( To make things trickier they can't tell us where it hurts or what's the matter. VERRA relieved that she is now well, or well-er, and that you all took good care of yourselves with napping during the worrying time.