Thank you for all the kind comments about Lorelai Gilmore. She has been taking her medicine every day and walking on a lead when we go to the dam. Peri ranged far and wide and Gilly yearned to run after her. 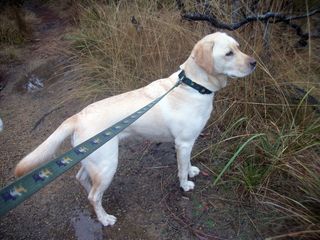 She hasn't cried at all and we have been trying really hard to be quiet and calm. Today she was allowed to run off the lead and she has a wonderful time, running with Peri. There were so many smells she had to have a bit of a rest!! 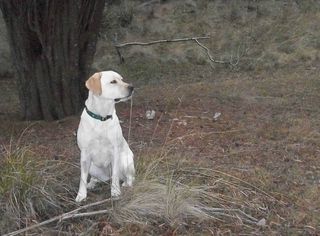 Peri was happy to have her running, and rolling in something smelly, mate back. 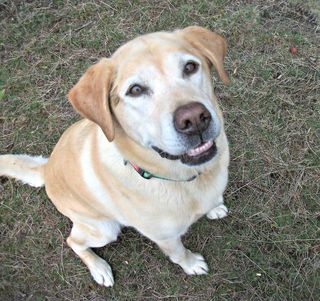 A long time ago in a galaxy far, far away... I had my ears pierced an extra time and a half. Ergo I have five holes in my ears all up. Sadly, probably more than seven years ago, I stopped using the extra piercings. They closed up at the back. MrsDrWho gave me nine pairs of cute earrings perfect for the three extra piercings and so for the last three days I have been making my piercings work again. I concentrated on one at a time and every time I walked into the bathroom I'd poke the earring in to see if it would go through. Eventually the back of the hole gave up the ghost and I poked it through. Strangely, I seem to have no real feeling at the back of my ear lobe. And today: success. I am all earringed up!! Here's the three earring ear: 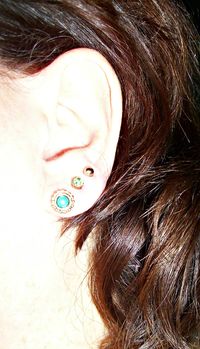 I can see more gray in my hair. It's bite the bullet time. I don't think I could keep up with a colouring regime, so apart from some wodges of colour in late Winter, I am apparently going to just not care!!

That's one job out of the way.

Job Two was pyjamas. I wanted to sew some, but of course The BSODL (tm) only had fluoro green or pale, pale green with white bunny flannelette.  There was a sale at Target, and though there wasn't a matching pair, these will do nicely at 50% off the original price. The top is a bit racy with the back being all lace. It is lovely, soft and stretchy!! The pants have sheep that say, "I only have eyes for ewe". 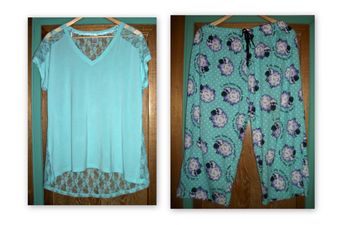 And a new striped green top. It is not emerald, it is not bluey green. It has dark blue stripes. It is hard to photograph and it was on sale at Rockmans. 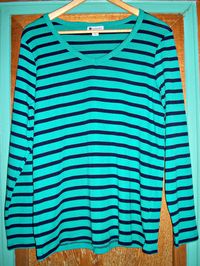 There has been, wait for it, knitting!! I found my cardigan carefully put away in a tub of knitting and sewed the fronts to the back. It fits. This is good. So I decided to tackle the sleeves, bearing in mind the pattern is written for 10ply and I am using 8, and I want straight sleeves instead of bell shaped.  The first attempt at a hem was a failure.

Then I tried a band like the one on the other pieces with a potential placket and button. This was more successful but I over-estimated my arm size and it was way too big. I want the lace pattern to show up nicely.

The third time seems to be the charm thus far. 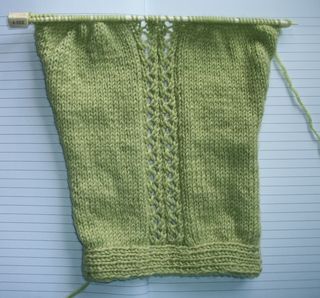 I am not a huge Heston Blumenthal fan. I know his food can be considered 'art', but I liked it best when he helped the children's hospital or the submariners. SBS is showing How To Cook LIke Heston. I am never going to serve my chilli con carne on a bed of flaming wood-chips or waft about the house trailing liquid nitrogen vapours,  but I might just be tempted by the chicken pie, the rich chocolate truffle cake (without the exploding space lollies in the base) or today: the roast potatoes. They are cooling in the colander waiting for the next process.

I am rather more excited about Sally Wise's self saucing banana pudding. I'm making that tomorrow and served with custard it should be delicious. It's from her new book. I made the Ginger Coconut slice for morning tea and it was so quick to make, cooked in twenty minutes and topped with lemon icing it was delicious. I like A Lot of ginger so I think I will add some finely diced glace ginger next time.

We have been having record April temperatures during the day and overnight so it was lovely to have some proper rain. Not much, but enough to make things green again and to make Peri and Gilly smell like my woollen school blazer did when it was in the rain. 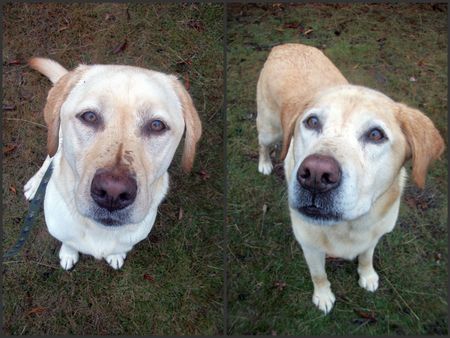 The Labradors like the rain too, here's hoping we have more, but in moderation.

I made pyjama pants from the Amy Butler lounge pants pattern. I used op-shop sheets and they are very comfy. I need to replace elastic on one pair! Very cheap and quick to make.

Ginger coconut slice sound good. I love ginger and enjoy the ginger cordial with lots of ice on a hot day.

I haven't ever worried about dyeing my hair. I discovered when I renewed my drivers licence recently that I am so much greyer than five years ago! Oh dear! Not to worry, that's more money I've had to spend on yarn!

Glad Gilly is being a good patient, even if not very patient about it all.

i love that pic of them :D
if I wanted to draw a pic of them, would it be ok? not for sale, just as a thank you for visiting the blog? :)

i have http://en.wikipedia.org/wiki/Conch_piercing
on both ears but the hole on the left is closed on the bottom and I don't have the nerve to push the jewellery through :p lost it originally on the plan to NZ and i was more interested in seeing the sights than finding jeweelry :p

That IS welcome news. And look at Peri's silly smile!
I had my ears pierced as a teen but was too allergic to wear anything without suffering, so finally allowed them to close up. Sigh. I'll just admire your earrings.

Love those earrings. I have the same problem - I was dragged to the shop to have my ears pierced when I was 8 & then the holes were infected. I stopped wearing earrings for 15 years & then I tried like you did - every day, a little at a time.

I'm so glad that Gilly is feeling much better & like her old self!!

I must admit that I've reached the same stage as you re the grey hair. I haven't been brave enough to give up colouring my hair yet, but I also don't get it done regularly enough to not see the greys in between :(

Your pyjamas look great....they're so much nicer than my grandfathers old pj boittoms & t-shirts that i'm wearing at the moment! LOL

I also love watching Heston Blumenthal and his recipes are interesting. We have some super preprepared Heston food in a supermarket here. His hot cross buns are amazing.

Your final comment about the dog smelling like a wet school jumper made me giggle - bizarre things stick in the memory, don't they? And you seem to be having some clothing fun - yay you!

i laughed out loud at the thought of you walking around the house wafting liquid nitrogen vapours. in your lovely green pyjamas! i used to have three earring holes too. plus a nose one. i dont think ill be reopening that one anytime soon tho.

i am LOVING your green cardi. Sleeve detailing is just gorgeous.

I've let my extra holes close up too - I wonder why sometimes since I liked having extra holes to play around with!

meant to say, having just made an Amy Herzog, I approve of your choice. Isn't she a lovely designer?