Home Archives Profile Subscribe
By George, I Think I've Got It!!!
I Don't Care If You Are Called The Rare Miss Frigidaire.

The recipe is from the Winter 2012 Family Circle. I was able to find some large pasta shells in the posh deli, but they were only 6-7cm long I am pretty sure the ones in the magazine were truly giant and at least twice as big. I was grateful for what I found!!

Other than that, the ingredients are staples. I would have liked more of the tomato sauce, but that's just me. I like tomatoes.

I have re-ordered the instructions, as when I followed theirs I had to do some boring waiting for the zucchini to cool.

I made half the recipe and it filled 24 shells, each with a heaped teaspoon of the mixture. The whole recipe would have made 48, a huge amount I think to serve four people. I rather think this is a side dish and so I ate mine with some baked chicken. It would be nice with a lemony* green salad too.

Heat the oil in a pan over medium heat and add the grated zucchini and garlic. Cook, stirring, for 5 minutes or until soft. Place in a sieve and press out the excess moisture. Set aside to cool.

Cook the pasta in a large pan of salted boiling water. Cook for 6-7 minutes. The pasta I bought said to cook it for 13 minutes, so I think you should cook whichever pasta you have for half the recommended time. Drain in a colander and rinse twice in cold water. The pasta should all be cold. Separate if necessary and set aside.

Make the tomato sauce by putting the remaining oil and garlic in a pan over a medium heat and cook for 1 minute. Add the tomatoes, salt and pepper and sugar and bring to the boil. Turn the heat down to a simmer and cook for 10-15 minutes. The sauce will thicken. Pour into the base of a large baking dish or casserole. Mine is 24 x 24 cm.

Beat the ricotta with a fork or spoon until it is smooth and then add the lemon zest and half of the parmesan cheese and mix well again. Fold in the zucchini.

Stuff each pasta shell with a heaped teaspoon of the ricotta mixture and place on the bed of tomato sauce. Top with the remaining half of the Parmesan cheese. Bake for 20-25 minutes. The pasta will be golden and the sauce bubbling.

Serve immediately. I added a little more pepper and a squeeze of lemon juice. Delicious!! 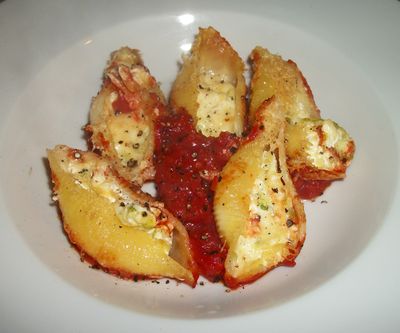 * I believe I think almost every dish can be improved with the addition of lemon!!!!

Things are ALWAYS better with lemon.

I must make this too! You made it so well it looks like a restaurant serving!

Yes indeed. Lemon in everything. And bacon in most things. Except lemon tart and lemon meringue pie!

Every time I read your blog, I get hungry. You're killing my waistline! ;)