The Hydro is laying pipes across the park at the dam where we walk. Peri and Gilly have had to have their leads on so they don't run into the path of the digger. On Saturday it was all quiet and so they could have a lovely run. And Peri ran. Away. For ten minutes we couldn't find her. I knew where she was. She was up the hill near the smelly things. Gilly and I drove to the gate and back and parped the horn. Peri was waiting at the spot where the car was parked and came running to us. 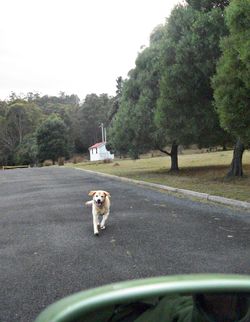 She ran so fast I didn't have time to get out of the car before she arrived!! I didn't worry that she wouldn't come back, but I thought she might have been caught on a branch or some wire by her collar, or have hurt herself. She just had awfully smelly, muddy feet. 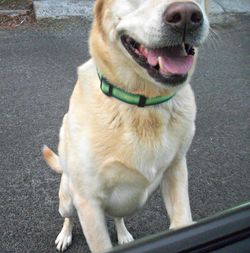 It's been reasonably quiet here, although there was a bit of a stir in the neighbourhood when the new people over the road lit a fire in their garden. The smoke was very bad, I couldn't even see over the road. My washing, and the knitting that was blocking, smelled smoky and there was ash all over the car and yard. Luckily it was a bonfire of wet vegetation rather than a dangerous fire. 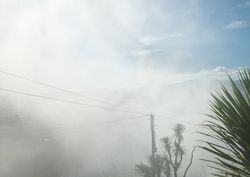 He did come over later on and apologise, but I think we've all checked the Fire regulations and next time we'll ring the Fire Brigade instead of dithering for half an hour. 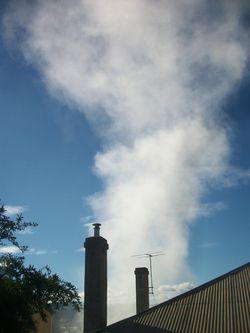 That's the roof of our house and the smoke wafting high up into the sky.

Whilst doing nothing very energetic I have managed to finish my Short Scene cardigan, which fits, and find some very good buttons. I think finding buttons is the hardest part of knitting a cardigan. 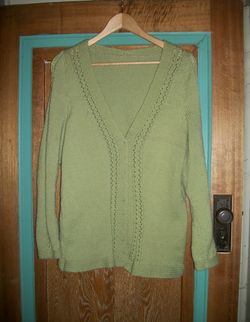 There's a new hot water bottle cover, and a repaired cuff on my mittens and the Dexter Haven Hat.

The beret is finished, I just need to sew in two ends. I am hoping it looks OK. Hats don't suit me, I don't know why. I finished the Secret Knitting for MrsDrWho as well.

The weather has been both very cold and quite warm: the other morning it was 1*C when we went for a walk, but today it was 18*C and I went out in a Summer skirt and top. Peri and Gilly are enjoying the not too hot Autumn sun. Gilly has been feeling quite well, though I watch her like a hawk and try to discourage mad beserker-bonkers running in the backyard. 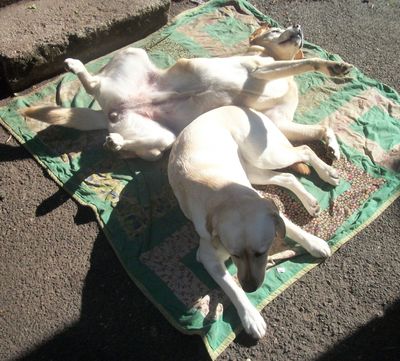 I've made about five batches of Lemon Meringue Cupcakes recently. These were for the doctors and nurses at The Animal Medical Centre. They look after Peri and Miss Lorelai Gilmore so well!! 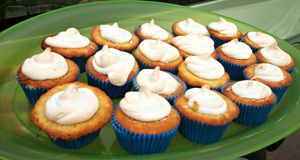 So basically, we're having a lazy time here: resting, lying on the couch with a hot water bottle and a quilt, taking a book and a cup of tea outside in the afternoon to enjoy the sun.  I'm saving up my energy for an outing to Afternoon Tea on Sunday. There may, or may not, be a new dress. Only time will tell!!!

The cardie is gorgeous. And so is the beret. Wearing hats is a matter of attitude and angle.

Oh they are a worry sometimes, our four legged friends. So pleased everything worked out :)

I love your cardi! I also agree that finding buttons for handknits is the hardest part of the project. Your buttons are perfect!

The lemon meringue cupcakes look absolutely delicious. Hope you saved a couple for yourself.

Wowh that was a lot of smoke. I have smoked my own clothes out once or twice by starting a burn off without remembering I had put my clothes on the line. Luckily our neighbours are far enough away as to not be affected by my sillyness.

The lemon meringue cakes look delicious. The weather has been quite cold this week, but it is supposed to be 18 today, gray, cold and miserable outside instead.

Surely you know Peri is only trying to replicate her favourite perfumes which you keep washing off?

I've made your lemon tarts. Delicious and they didn't last long at the gathering I took them to.

Am planning on lemon cheese, or butter or curd or whatever name you call it. The lemons are calling me from the fruit bowl.

I am so torn on wanting to be able to smell stuff from the monitor because I want to smell the lemon cakes but I don't want to smell Peri's smelly feet. I am glad she was okay!

Your cardigan is gorgeous! It fits you very nicely. You're right about buttons being the most difficult thing to find especially when my selection isn't good.

Naughty Peri! Why don't dogs like rolling in rose petals instead of smelly things?!
The cardi has such pretty detail and looks great on you! You have been busy with the green accessories; I especially like the sculptural look of the beret.

The cardigan and beret is so pretty!!! The mornings here are getting colder and I've now pulled out some of my woolly clothes to keep myself warm :)

you're so clever. for me the hardest part of knitting a cardigan would be the actual knitting of a cardigan. I bought a beret/beanie the other day but I doubt I will wear it here in sunny Queensland even though I love hats. It will be a travelling south item of clothing I think.

That is a Very Smokey fire. Ugh, how annoying for your clothes and knitting, although I am glad he apologised at least.

Your cardigan looks fabulous, fits you so well. Choosing buttonsis hard, but quite fun too. If you've got a good button store or stash, at least.

Love those cupcakes, yum! Hope you have a lovely Afternoon Tea and the weather is good for a New Dress!

I'm glad it wasn't a serious fire. I love your cardigan and the other knits. I'm looking forward to seeing what your secret project for MrsDrWho looks like :)

As always the things you have made are lovely. I hope your hat lloks good on you....I'm afraid I'm a bit like you...I don't suit hats either!

I love the picture of the dogs on the quilt, they look so happy :)

The cardigan looks great. I have the same problem with buttons & usually just knit cardigan without buttons. I love the beret too.