Home Archives Profile Subscribe
Silence in the Library? No!!
With Me It's Toile Or Nuthin'.

I didn't believe the Donna Hay recipe (Feb/Mar 2013) when it said that you could make a burger from pork mince, a garlic clove and horseradish cream. I was wrong. Very wrong. It made the most delicious-est burger, juicy and full of flavour.

I only had some ordinary local cheddar, so I used that. No watercress was to be found so it was chopped up celery leaves instead.

I would just caution that the hamburgers do tend to fall apart, as there's not much binding them together, still they are fast and easy and tasty: not much more one could ask for really.

Put half the aioli, the sliced apple, salt and pepper into a bowl and mix well. Set aside.

Put the pork, garlic and horseradish in a bowl, season as desired with salt and pepper. Mix very well and then form into four evenly sized burgers.

Preheat a pan or BBQ  to high heat and then brush the halved buns with oil. Cook, cut side down for a minute or so until they are lightly browned or charred.

Brush the burgers with oil and then cook for about 4 minutes each side, or until cooked through. 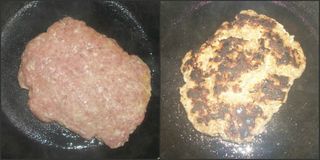 Spread the rolls with the remaining aioli, and top with the burger, apple-slaw and watercress. 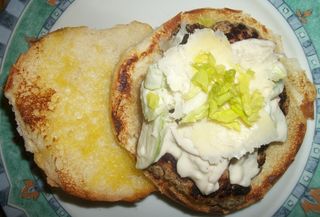 This is an easy recipe to halve or double and so quick to make. The horseradish cream is not too hot, nor too bland. It is a pretty good burger. 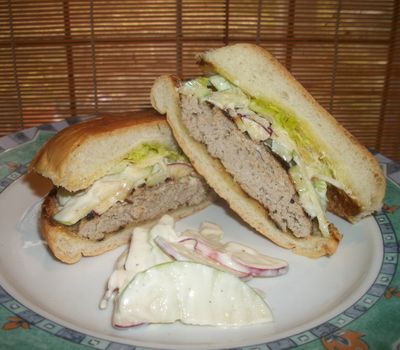 I am SO making these!! I love the flavour of horesradish and apple slaw :)