We have no style at our house. When I watch TV shows and read magazines it is all Shabby Chic, Retro and Minimalism. Our style is Someone Gave Us Two Lounge Chairs, I lIke Green Walls Which Match My Star Wars Poster and I Have A New Bargain Rug That Won't Show Labrador Dirt. And here it is, avec Labradors. 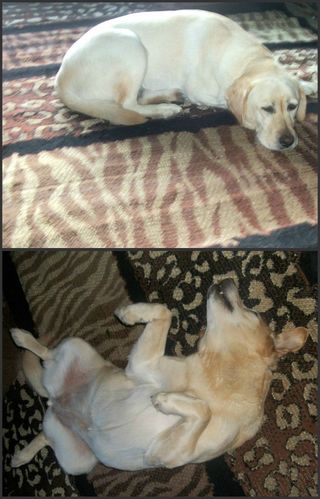 It is acrylic, which means I could carry it myself, and instead of being $100, it was $39. I used a voucher which made it $29. Our house is not faux wild animal skin friendly being a 1930 building, but I chose the colours that would camouflage Labrador dirt and bits and bobs. Peri and Gilly like their new rug a lot and have lain about on every part of it.

We had a phone call from The Vet this morning to ask if Peri could donate some blood for a sick dog. I was having my hair cut at noon and two hours was a long time for Gilly to pine and howl at home alone, so she went too!! The nurses were happy to babysit her while Peri donated blood. They were so excited to be at the vet and went happily with the nurse with nary a backwards glance for me. They were both very well behaved and Peri received a bag of special food for her efforts. She is sharing it with Gilly!! I think Peri is very brave and very clever to sit still for so long and not wriggle. I'd wriggle. 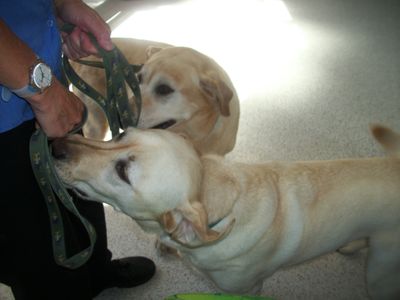 This year I am being 'inspired' by the Craftsy Block of the Month quilt rather than following it faithfully. I have made four 12 inch blocks. One of the striped ones is in reverse and the crosses don't quite met perfectly in the centre but I like them. I managed to find an aqua blender fabric the same as the two green ones as my background so I am very pleased. 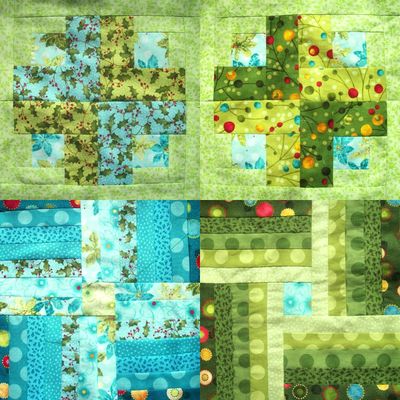 MrsDrWho starts school proper tomorrow, all the children arrive and of course the weather is hot. Our new four terms means that children and teachers will be at school in the hottest weather for longer. I am still a little bah humbug about it all. She needed new containers for desks to designate colours and hold zooms and rulers etc. There were none to be had at a reasonable price in seven colours. I thought I could probably make some kind of cover for the $2 Target jugs and I made a prototype: 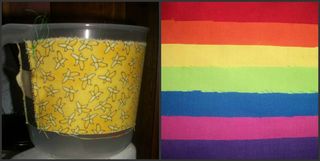 I refined my pattern and sewed some very successful covers that are reversible. I have enough material left over to make one more reversible set and then one more with a contrast. They are very economical and washable!! 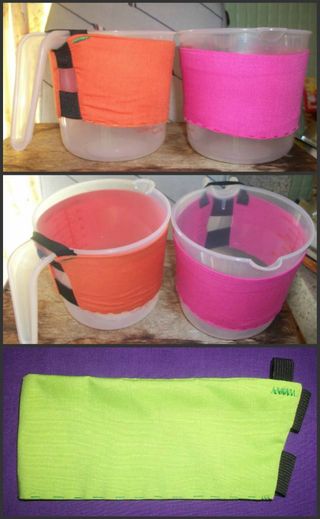 I cooked some Kiss biscuits to ameliorate MrsDrWho's return to school. I made twenty eight, so that's four weeks at one a day, or one week at four a day. I used my mum's raspberry jam and lemon icing. There was a plain biscuit left over so Peri and Gilly had that. 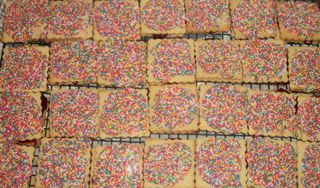 We've had some lovely cooler days in the last week and Peri especially loves the nip in the air. There has been running in and out, jumping and chasing, and playing Tug of War with the reindeer. Peri doesn't usually like toys, but she was quite taken with Gilly's reindeer and so there ensued a long and exuberant Battle Royale. Peri was triumphant. 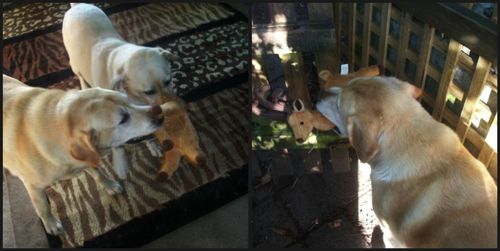 MrsHouseOf bought us all a surprise gift, one that has me humming the Darth Vader theme tune every time I have a cup of tea!! Use the force, Kettle!!! 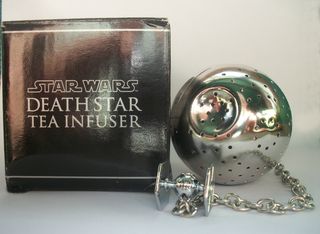 Tomorrow the Hydro is turning the power off from 9am until 4pm-ish, and so I am going to decamp. I couldn't stay home all day with no cups of tea. Peri and Gilly are staying home with a bone.

Heh heh, use the force, kettle! I love that! What a shame it can't doit, then you wouldn't need to decamp tomorrow.

Peri is such a good girl to give blood. What a special girl you have.

I love how Peri donates blood. I wish I could.

The cooler weather is lovely,I am very much looking forward to autumn

OH MY GOD a death star tea infuser!!! i MUST have one. im so impressed by Peri donating blood too, and one can never have too many dog rugs. what is it with dog hair and getting into EVERYTHING?

i think its so great that peri donates blood :D not many people think about their dog donating blood. sky would have none of it tho :p run away the first chance she got :p

Lovely to hear about doggy blood donation. What a nice thing to be able to do. We have a lot of towels for the cats. They are quite keen on them.

I love your quilt blocks. They are rather lovely!

Death Star Tea Infuser has such a nice ring to it!

I love the fabrics you used for your quilt blocks! I cannot see anything wrong with them at all.

The girls are so sweet and adorable!