There's A Pear In There.

There's a pear in there,

And a chair as well.

That I think is swell.

The Pear Dress is complete and I have worn it twice. It is a cotton with a kind of sateen finish, light and cool. When I went to cut it out I realised it had nap: all the pears fell the same way. Luckily I had plenty of material, though I always lay out the pattern as if I don't have enough. I am in two minds about the bodice armhole area in the front. I have a hollow outside my collar bones and I am not sure if I should undo the facing and sew the side/front bodice seam closer at the top, or just leave it. The pears are very crazily placed and they really obscure what is happening. I made another biased binding hem. I love it. 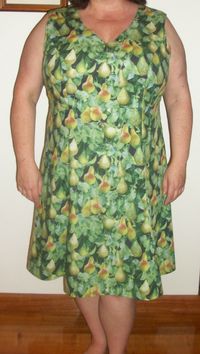 MrsReno and MrsSherlock sewed the second Craftsy BOM 2013. MrDrWho was not sewing last night. It was a nice easy block to make. 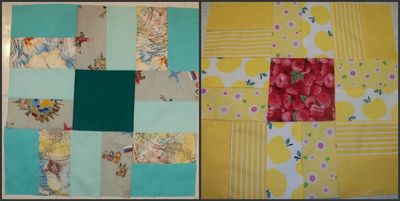 My blocks are still lost and likely to remain so for at least a week: 32 29 30 29 30 32 31* Celsius. I can't think when it is hot. The kind Librarian renewed the book I can't find. As soon as it is cool I will be able to resume normal programming, but not now. In an effort to cool the house slightly I hung a heavy corduroy curtain outside the front doors. So now the hall is bathed in a dark green light but that side of the house is cooler. 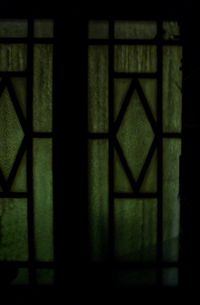 We go for our walk as early as possible, and so do other dogs. Classic Gilly and Jet, with classic effects. Gilly can run as fast as all the other dogs. 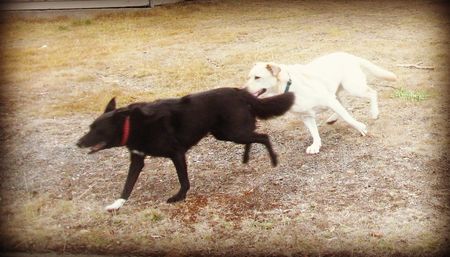 The State is being over run with rabbits. The hot dry weather means they are moving closer to suburbia. Peri has seen a few at the dam. She's not quite sure where they go when she chases them, but she's covering all the bases: Who's that up there? 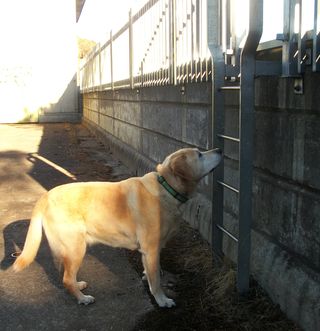 I have been noticing the various leaps into the car The Labradors perform. 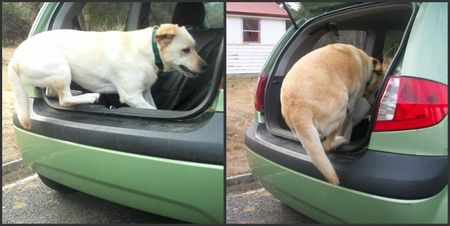 Gilly's is a running jump, while Peri tuck her legs in, rather gymnastically. When one Labrador is already in the car there can be some squooshing: 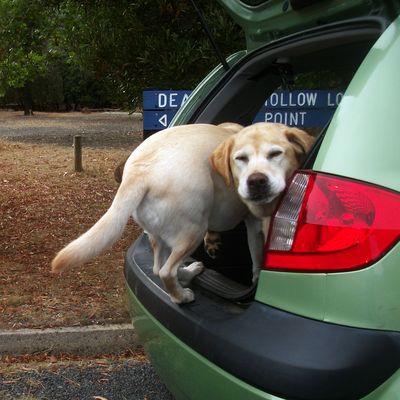 I can feel Peri going oomph.

Or it could be a lot of fun: 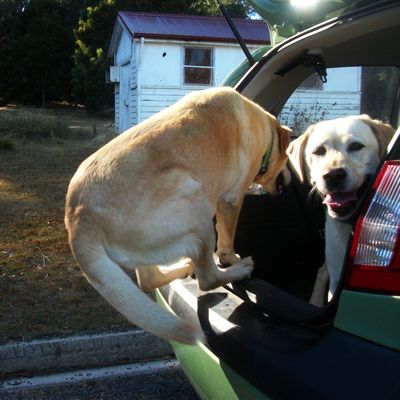 Peri has a much more accommodating car entry style.

And now it is time to stand under the sprinkler again. I may be some time.

Pull your tail in Gilly!

That dress does look cool too. I had pairs of pears back to back on some knit material once. Green pears, white background. I wore it till it fell apart.

When we had a bush holiday property near Cessnock in the Hunter Valley, the main open area had lots of rabbits. One evening, my three sons, then about 10 and under went rabbit hunting. Each took a stout stick. The plan hatched by the three of them was to quietly sneak up behind a rabbit and hit it on the head with their sticks. Needless to say, they caught none.

Hope it cools down for you soon. I close windows and blinds in hot weather during the day. It definitely helps and then I open up when it gets a bit cooler at night. It's only 27 here but I have horrible memories of the 46 just a few weeks ago. That night was still 38 at midnight.

We have out shade cloth across a few windows, it helps with the heat

I love the pics of the labs jumping in the car!

The Pear Dress looks lovely and so cool in this heat. With so much heat still predicted, I hope you and the Labradors can stay as cool as possible

Your Pear Dress is stunning. I went yesterday to a quilt shop to learn how to lubricate my 1930's Singer Featherweight. My fingers are itching to use it but I am hostessing Book Babes tomorrow, Friday, so must cook instead. I shall pack up some of our cold and snow in an envelope and post it to you pronto.

Do you ever use cool-ties to lower your body temps? I have made some to send to the troops in Iraq and Afghanistan,quick to sew if you have the crystals/pellets on hand. Golfers use them in the summer as well.

Scritch behind the ears for Peri & Gilly, the ever adorable girls.

sky leaps into the boot, almost hitting her head on the door :/

This pattern looks great on you sleeveless as well!

Love the motion shots of the girls getting into the car :)

I'm with you where the heat is concerned...my body has just ceased to function this year....& i have a/c. Although our ducted is on the blink & Paul had to race out & get a portable one as i was in the middle of a relapse :( I do hope you get some relief from the heat down there soon Cindy.

Gorgeous dress! I love the happy faces of your labradors.

Love both of your dresses. I agree that the shorter sleeves on the Doily Dress look better. You are so good in sewing that you can make any clothes that you like - that's so great! I often have problems buying clothes as I am so small and alterations have to be made.

I am loving the cool, swirly dresses.
I tried spotting you in the photo at the Cancer Center, but could not find you. I've only always seen you from the neck down and with a dog or two in the picture!

I am sorry you have been suffering with the heat, I wish you could send a bit up here. The curtain outside the door is a great idea, stops the glass from getting hot, which helps keep things cool.
The dress is lovely, yet again. Just thinking about pears makes me feel cooler, hope it works for you too.

Love the pics of the dogs getting into the car! Java just can't do it like she used to anymore. We put her front paws on and then lift her back legs to get her into the car. She's nine years old now and has such a hard time getting into our Honda Pilot; we give her a bit of help.