Home Archives Profile Subscribe
I Just Can't Get You Out Of My Bread.
Monkey See, Monkey Through.

Oh my, this looks just like a giant Cherry Ripe and I am assured by the people who ate it that it tastes Cherry Ripe-ish as well. It's from the March 2013 Good Taste magazine. I shall have to search out their February magazine as they had an Iced Vovo tart.

I think this recipe has the most photos I've taken for a while, but it is not daunting. It has stages and while one part is baking, you can start the next stage.

I didn't have a working 22 x 7.5cm bar tin. Mine has been used for fudge and it is a bit warped. I wasn't able to buy one either, so I settled on a 30 x 7cm and the result was fine. You do need a high sided, fairly narrow tin though. Other than that, unusually for me, I pretty much followed the recipe and was extremely happy with the resulting brownie bar.

Grease and line a 22 x 7.5cm bar tin. Make sure the lining is very high at the sides.

Melt the butter, 120g of the chocolate and the Cherry Ripe bar in a pan over a medium heat. Take it off just before it is all melted and stir to dissolve any lumps of chocolate. Cool a little. Preheat the oven to 160*C.

Whisk in the sugars and the egg and then sift in the flour.

Pour into the bar tin, smooth the top and then bake for 20-25 minutes. The recipe says cook until crumbs stick to a skewer inserted into the centre. I found I needed to cook mine for 30 minutes. I did check frequently as I didn't want the brownie to over cook. Set aside to cool. 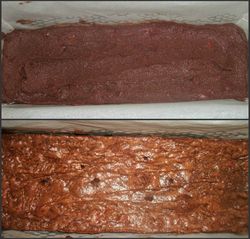 While the base is cooking and cooling, make the cherry topping. Finely chop half the glace cherries and then halve the rest. Place into a bowl with the condensed milk and coconut. Mix till well combined. Then decide whether you want to add some food colouring. I decided to add some. I used 6 drops in the end. Mix so the colour is evenly distributed.

Carefully spoon the cherry topping over the brownie base in the bar tin and smooth. Bake for a further 20-25 minutes or until the edges are golden brown. Take out of the oven and leave in the tin to cool completely. 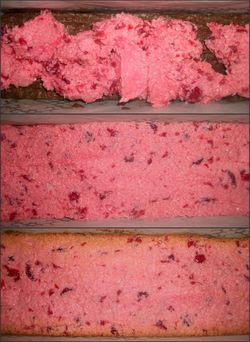 Remove from the tin. I then trimmed the ends and the top edges to make the bar more even and smooth. Melt the remaining 130g of chocolate and put about 2 tbspn in a ziplock bag to use later. I put the bar on a cake rack over a plastic container so the extra chocolate dripped off easily. Pour the chocolate over the bar and spread it over the top and the sides. Cut a tiny corner off the ziplock bag and use it to pipe stripes along the length of the bar as the chocolate is setting. If you start too soon the stripes will just melt into the covering chocolate. Set aside until the chocolate sets and cut with a hot non-serrated knife. 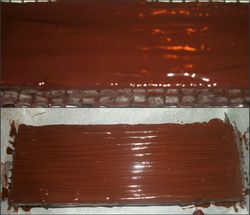 Here is one poor photo and a reasonable one!!!

I sent this off to be eaten in MrsDrWho's staffroom so I don't have a photo of the finished brownie bar, but it looked  like the one in the magazine. So here it is. 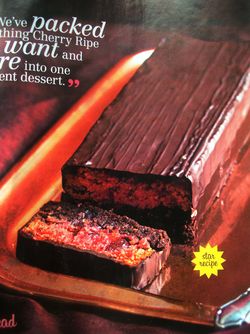 Oooh! sweet! One of my sons gave me cherry ripe pack at Easter. two bars and a big egg. I prefer violet crumble bars but he had it in his mind that I really like cherry ripes. It's the thought that counts. I could not believe the sweetness on the first bit of a bar. I haven't had one for probably 20 years at least.

Looks so good. Cherry Ripe is my favorite chocolate.

yep that does indeed look like a giant cherry ripe. How fantastic. I'd love that.

That does look delicious. Cherries are my favourite fruit.

ah how i love a cherry ripe. i was just looking for a decadent baking recipe for the weekend, i do believe i've found it :)

I'm afraid I'm with Lois, can't stand cherry ripes! But gee it does look just like a cherry ripe! That is very cool, being able to make a slice just like a chocolate bar. I saw the magazine with the iced vovo slice on the cover, that was similarly cool!