I remember watching Joe Dolce's 'song' being Number 1 on Countdown for weeks. Believe me  you don't want to click on the link, at best you'll have an earworm, at worst......

This week my Knit to Flatter book arrived. It's a book of patterns, by Amy Herzog, where you decide what figure type you are and which styles suit you best. Without even asking MrsDrWho to help me with a photo I have decided for myself, to be going on with, and I'm going to knit the Cypress Cardigan.

The book has lots of cardigans and gives hints on how to adapt each pattern to suit each type- and there are only three types, so I have a high percentage of making something fabulous!!

Meanwhile I am making the There's A Sucker Cardigan. It's The Bailey Cardigan and I am using my Damasco mohair. Thus far I have only knitted a few centimetres, but it is made in one piece to the underarm, so it's a slow journey. 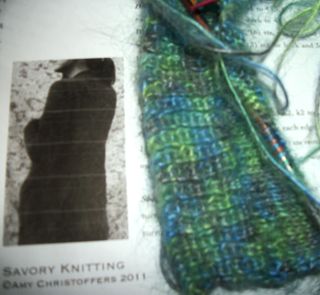 There has also been a little crochet of a Bunny doing the rounds. It's my Rabbiting On. I crocheted a little ball for the tail instead of a pom-pom and embroidered eyes, as I felt a pom-pom and button eyes weren't safe for a baby/toddler. Rabbit just needs to be sewn together. 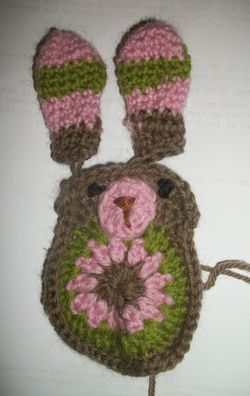 One row of my Craftsy BOM 2012 has been sewn together.

Once each row is sewn, I am making some biased binding from the left over batiky prints and centring it over the back where the two blocks meet. Then I'll sew it down and make a nice set of quilted lines on the front. 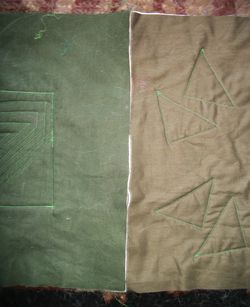 Peri Pumpkin has been enjoying the Sun. Now Daylight Saving has ended, and I am starving them by making them wait an extra hour (from their POV) for their food, she has to seek out the warmth. The Sun doesn't shine on her spot outside the back door until much later in the day. This is Morning Tea Sun on the front verandah. She has been sitting in that same spot for twelve years. Well not constantly, but once every week. 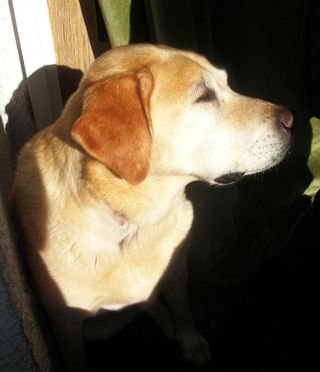 While we were having Morning Tea a very stange boast motored up the river. I have no idea what kind of boat it is, but it looks as if Captain Jack Sparrow could be aboard. Lorelai Gilmore has conquered The Creature several times. Velcro and a too big plastic cup are no barrier to her insistent nose and teeth. She is very funny. The Creature doesn't stand a chance.

I put some saucepans on the lay-by. My old saucepans were excellent and the same brand, but the knobs on the lids had broken and the handles were all loose and wouldn't stay tight. The new ones have copper bottoms and cook beautifully. How do I know this?? Because my very kind mum sent me the money to pay them off and they are at home with me. I am very lucky!!! 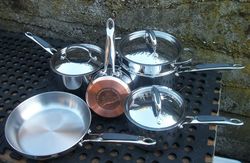 I have had quite a sore toe since last Sunday. It was swollen and felt infected. I soaked it in hot salty water, rested it, doused it with antiseptic, but nothing worked. Knowing that if there was going to be a red line up my toe and foot it would be at the weekend, I went to the doctor and came away with a script for antibiotics. And yes, my toe was much worse yesterday so I cashed my script in. It's still sore, but not as bad. It would be so much easier if I could just fight my own germ battles.

Last, but definitely not least, we went out for Knitting dinner and I had the most delicious mixed entree, Tom Yum soup and Green Tea ice-cream. Peri and Gilly had a wafer each. Peri actually had one and a half because she was waiting faithfully at the back gate.

I had meant to post to my blog on Thursday, but I had an appointment and then on Saturday I had brunch and a long nap in the afternoon and today I knitted and made a cake and went to tea at MrsDrWho's house. I think I am suffering from Daylight Saving Lag.

Peri and Gilly are very happy because Sandy and Rafa are back from Easter holidays. We haven't seen Jet thus far. Maybe tomorrow? And the weather? Warm, but not too warm, with a few showers. I am getting as much wear out of my dresses as I can before Autumn really kicks in.

Wow, that's a long title, I shall just abbreviate it to Beef Burritos from now on. It's a recipe from the April 2013 Good Taste: The Chocolate Issue.

This is quick and very delicious. It has Mexican flavours without needing lots of cheese or tomato or spices. I really only needed to buy cumin, burritos and some rump steak. I don't like coriander, so I substituted parsley & red onion. Coriander lovers should use coriander. I prefer a stronger lemon taste so I squeezed the rest of the lemon into the lentils and avocado mixtures. I like baby spinach instead of rocket. Truly, this is the same recipe, just with a few substitutions.

It was really delicious, I can recommend it.

Preheat a frypan, grill or BBQ to high. Make sure the rump steak is not straight from the fridge, it cooks best if it has been acclimatised to the room temperature. Obviously if you live in The Tropics you take great care. Rub both sides of the steak with 2 tspn of the oil and then rub in the cumin. Cook for 3-4 minutes on both sides, or to your liking. Remove from the pan, wrap in foil and allow to rest.

Combine the rest of the oil, lemon juice and garlic. Pour 1/3 into a bowl with the mashed avocado and 1/2 the coriander. Mix well and season to taste.

Combine the remaining lemon/oil mixture and coriander with the lentils and chilli. Again, season to taste.

Char-grill, or dry fry the burritos for 30 seconds or so on each side and then slice up the steak. Assemble each burrito with 1/4 of the guacamole & lentil mixtures and rocket, and then pile on 1/4 of the steak. Squeeze on a little more lemon juice and serve immediately. All Creatures Great And With A Cup In Them All.

Easter has come and gone, but not without Peri's favourite happening of the year: The Nextdoor Party on Good Friday. Peri has been going to the party for years. On Friday Gilly took an added interest. There is a sign that says Don't Feed The Dogs: I think she was trying to get some attention and, ergo, a sausage or two. It didn't happen. Peri stayed there until way after dark when everyone went home. 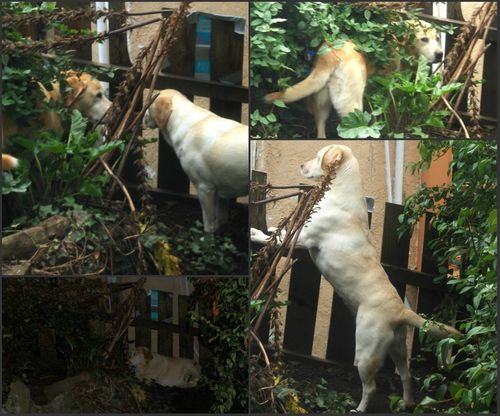 MrsDrWho gave The Labradors some Easter presents, and this year's hit with Gilly has been The Creature. You put a small plastic bottle, or in our case a plastic cup that she loves, inside the velcro part so it crackles when she bites it and it has a fluffy squeaky tail. She has been worrying it since Sunday and just a few minutes ago she managed to open the velcro part and pull out the cup. She is inordinately pleased with herself.

Peri is not interested really, she has her eye on the rawhide bones that are up high and out of reach. Peri is looking particularly beautiful at the moment and is loving the cooler weather, as are we all. 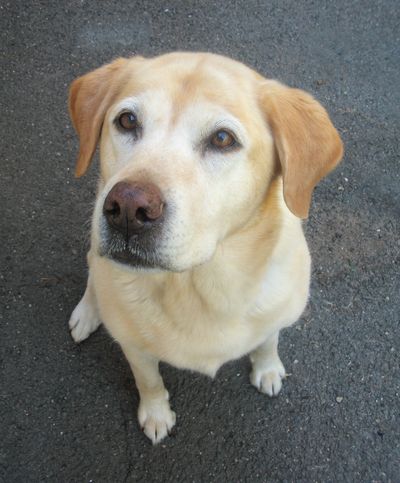 In fact Peri is feeling so well I think she is secretly training for some kind of obstacle course, maybe even The Krypton Factor?? Gilly is being an excellent look out for bunnies, and could certainly help solve any puzzles involving a plastic cup. 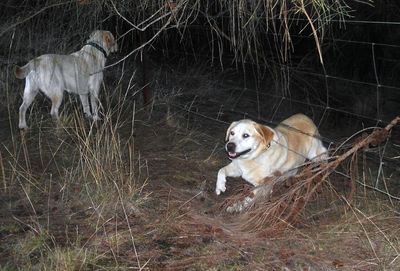 I did a little Easter cooking, mainly for The Vet and some Easter Egg Kiss Biscuits for MrsDrWho. 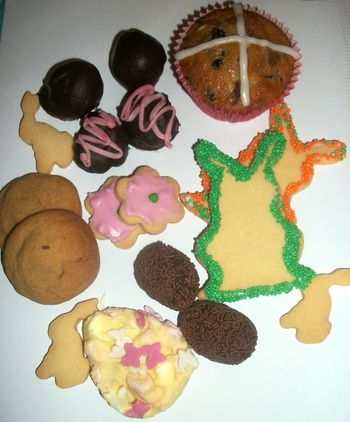 There has been good new and bad news with respect to my knitting. The good news is that the I Let Leaves socks are complete. Well apart from ends and blocking. I'm calling them done. I love the lacy leaves and they are so warm and soft to wear. 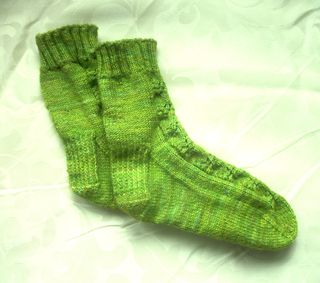 Then the bad news. I started my Rags to Ridges socks (Kebnekaise socks) with The Knittery Sea Life. It was the perfect wool, the pattern has you purl a colour every time you come to it, so I was purling the orange. It looked great. It looked fantastic. Then suddenly the wool just started disintegrating in my hands. Falling apart all the time. The outside was fine, the centre ball I pulled out was fine too. There was just a swathe of sad, falling apart wool in the centre. I don't know why. I did try my Opal wool, but that just didn't work. Any suggestions of where to buy a mainly green sock wool with another random colour would be greatly appreciated.

So know I am knitting plain and simple TV watching socks, not that I don't watch TV with the other socks, some Opal Show Your Colours: My Colour Me Surprised Green socks. I am almost to the heel turn. 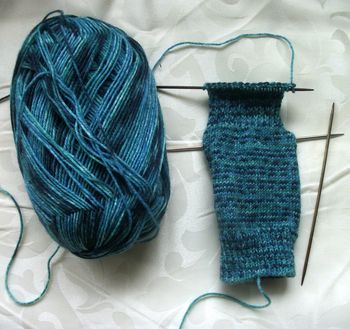 MrsDrWho gave me a wondrously indescribable teapot with cats and dogs for Easter. It was on super special and I can't for the life of me think why. It rates right up there with the triptych Cat mirror I gave her years ago.

I made a Doctor Who tote bag for MrsDrWho. I seemed fitting as it echoes her name and Doctor Who was back on TV with new episodes yesterday. I did look online for a tutorial, but there were none so I had to use my brain to make the Bow Ties Are Cool tote. It has two right sides: one with The Eleventh Doctor's red/burgundy bow tie and striped shirt and the other with his brown bow tie and brown check shirt. I actually left my handbag with the Bow Tie bag wrapped up inside, at home when I went to MrsDrWho's for tea. So sadly it has been badly wrapped and wrinkled for over 24 hours. 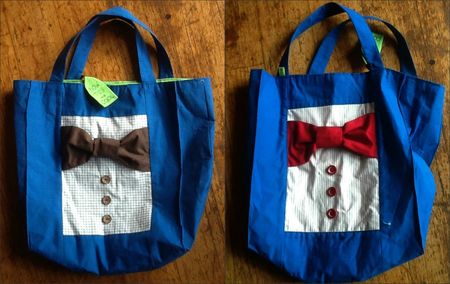 I am particularly pleased with the brown timey-wimey buttons!!!

I am still very tired. There has been a lot of sleeping because it has been so cool, but I haven't quite caught up on my making chocolate crackle Easter eggs effort. I love doing it, and the children were all so good and helpful. It just really reminds me of how I don't live in the real world anymore, where you can just do things you like, willy-nilly. I think that's why I have been such a prolific sock knitter: it's useful, keeps my mind busy, but requires little effort other than being able to sit up and wriggle my hands about a bit.

Now the Ravening Labrador Hordes must be fed, there are socks to be knitted and I really must pick up all the dog 'toys' in the lounge room......