I feel very proud of my Iced Vovo Tart. It wasn't that difficult, I was able to source all the ingredients very easily, and it was really a question of following the steps and waiting for things to set.

I didn't have the right tin and so I cut some card and made a box to fill half the larger tray and used foil to keep it all together.

I think it is best to remove the jammy section of the Iced Vovos, it didn't really crush up well. I used Granitas for the plain sweet biscuits as they do crush up well.

If your marshmallow mixture sets too much, and mine did, beat it in your mixer for a minute or two and then continue..

The recipe asks for leaf gelatine, which I was able to buy here- McKenzies brand, but you can use powdered gelatine. You need the correct amount to set 2/3 cup liquid for the jelly.

None of the steps in themselves are difficult, but it did take me all day. I cheated by putting the tart in the freezer to start off to cooling and then transferred it to the fridge.

I bought a piping set at the supermarket with a star shaped nozzle and used that to pipe the cream. I had a few trial runs and then threw caution to the wind.

This post is quite long and I have been a tad tired, so please excuse any typos!!!

Oops, I fogot to say this is from the Good Taste Magazine's January issue. 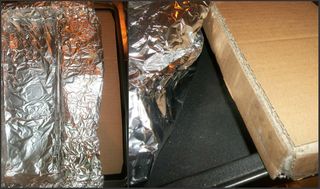 Process or crush the biscuits in a bag with a heavy kitchen implement. 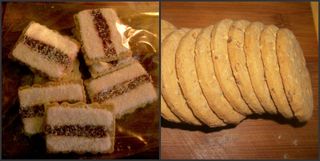 Combine with the butter.

Press into the tin, up the sides as well. Use a glass to press into every nook and cranny. Then refrigerate for an hour.

Spread into the base, smooth the top and refrigerate for 2 hours. Mine didn't take that long, only an hour, so do check. Soak two leaves of gelatine in cold water for 6 minutes. Put the raspberries, water and sugar in a pan over a medium heat, stirring for 1 minute until the sugar dissolves. Continue to stir and cook for 2-3 minutes.

Squeeze the water from the gelatine leaves, add to the raspberries and stir till dissolved. 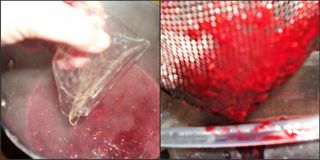 Push the raspberry mixture through a fine sieve to remove the pips, remember to check the underneath of the sieve too. Cool in a bowl for about 25 minutes and then pour over the marshmallow layer. Refrigerate for a further 2 hours till set. 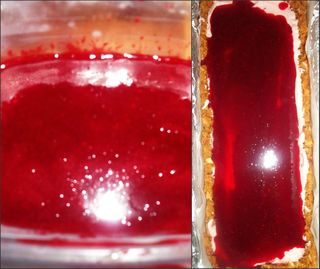 Whip the remaining 400ml of thickened cream with some pink food colouring, a shade you like, until firm. I fill the piping bag after I have attached the nozzle by standing it in a cup and spooning in the cream till it is half full.

Pipe one row of little rosettes and then another to match along one long side, and then repeat along the other. Sprinkle some coconut over the centre jelly strip and the pink rosettes. Refrigerate till ready to serve. I found the base to be a tad crumbly, but the slight tartness of the jelly ameliorates the sweetness of the marshmallow layer. Looks so good! I think I need to come for tea :)

I don't know if those Iced Vovo biscuits would last long enough to make that slice. Well done.

Oh I love iced vovo bicies. Mind you they aren't what they used to be :(

This recipe looks decorative Cindy...but I think you may have a tad more energy than me. I don't know that my body would allow me to work at a recipe for this long.....I'll enjoy your picture though :)

that looks fabulous - you're amazing !

That is just amazing!