I have noticed recently the acknowledgement and respect paid to the women associated with, or in, politics: Margaret Whitlam, Dame Enid Lyons and lately, Hazel Hawke on her death. All these women were knowledgeable and important in their own right:

I'm really interested in the women who partnered these men. They were such strong and self sufficient women and their husbands could not have achieved success without their support. I've read Margaret's biography, and a few books about Joe and Enid and now I'm looking forward to reading Hazel's reflections on her life.

Today I had another appointment at The Hospital in the newly renovated Clinic. Look how beautiful the glass partitions are in the waiting area. It is the rule that 10% of the money on Government buildings must be spent on art. I can't always agree with that because sometimes at school we had to spend money on art installations instead of better facilities. 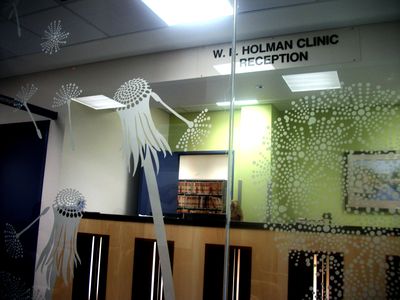 When I came home I made a start on May's dress. It was not very successful. If you put a zip in the side seam of the bodice toile, and then try to put it on, there's just no way you can without breaking the bottom of the zip. The waistband, which is quite high, more or less fitted. The large gap at the top of the side seam was pretty much the amount of FBA I should have done. Then it will fit nicely. Damn. There's not going to be a May dress and I am OK with that. 12 Dresses is a goal, not a requirement. I like the way there is some gathering where the bodice attaches to the waistband. It actually looks really nice. My KMart doona cover material is making an appearance again!! I wonder if you can tell that Gilly was helping me, playing with her cup in a bag?? I've taken to calling her Diddle Dumpling, I'm not sure why.

The wool shop and some neighbours had a lot of feijoas, and so I made some Feijoa and Apple jam, I'm not a big jam maker, I made and Apple and Rose jelly once, but this turned out quite well. 1 kg of fruit and two apples made about a litre of jam, or four jars. Feijoa smell perfume-y and taste delicious. We used to know someone with a tree when I was little, but I haven't come across them for years.

The weather today was perfect. I wore my Pear Summer dress and the sky was Summer blue with white clouds. It was 18* here, and 20* in the South. 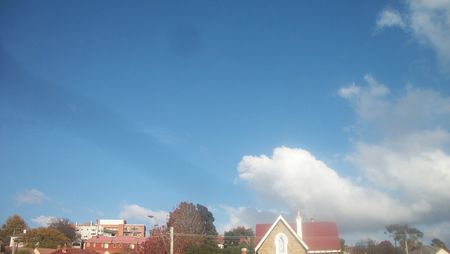 It is Autumn, in fact tomorrow is the last day of Autumn and then we are in Winter. The really cold weather never starts until after the Winter Solstice: when the days get longer the cold gets stronger. Peri and Gilly love running through the crinkly leaves on their walk and we have plenty of leaves around the garden. I sweep up one day and there are more the next. This picture has The Labradors in Treat Anticipation mode. You can just see where Peri's fur hasn't all grown back from when she last donated blood. I am not sure why. It must be because she is older. I love this picture, even though I know it's the rice cake they love and desire and not me. 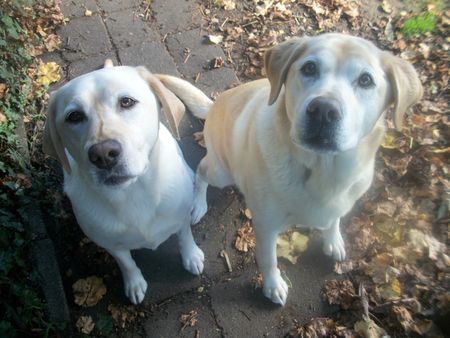 I felt the need for vegetables tonight. I had a big sleep this afternoon and woke up craving vegetables. I had mashed sweet potato and ordinary potato with garlic, carrots and peas. The peas are frozen, but like the rest of the vegetables they are all local. The garlic is so local it's from next door!! 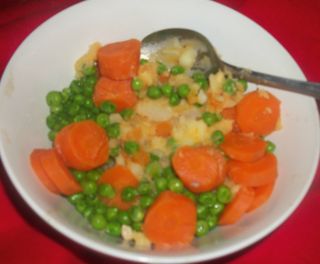 I made a slightly successful plan of what the Spare Oom looks like now.I couldn't make the door be in the right spot. 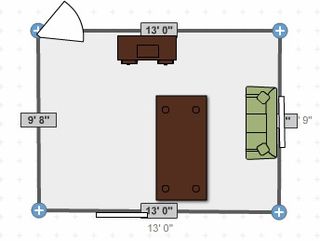 The light in the the centre of the room, and not very conducive to sewing, but the power point is on the back wall where the desk is. I'm thinking of a wall of bookcases and/or squares on the left hand wall with no window. The couch under the other window if for Labradors. The table is a large piece of laminated chipboard on a very old table, a green laminex one with tubular metal legs. The room is 3m x 4m, quite large for a sewing room I think. It doesn't have to be anything else, and the couch folds out to be a very uncomfortable bed. It may need throwing out.

Tomorrow is Friday Food, and I made a savoury loaf for MrsDrWho's school lunches last week. I've been watching The Little Paris Kitchen and I'm really enjoying it. MrsDrWho may well be the recipient of some of her baking too- I have the book on Hold at The Library. MrsDrWho is writing Big School Reports so I am baking some Caramel Chip biscuits tomorrow to ease the writing process. It's already after 10pm. I've finished my book so no reading tonight: a cup of fruit tea and then straight to sleep for everyone.

Australia is unusual in using month ends to deliniate seasons. Most other countries use solstices/equinoxes, so the winter solstice here *should* be the real start of winter. I believe Tasmania has been quite warm recently, comparatively; Melbourne has had some unseasonably warm May weather but is currently wet and chilly.

What interesting and active women. I love reading biographies. Everyone else seems to have a much more interesting life than mine!

Yesterday (31 May), the maximum temperature here was 24C! The day before "winter". How can there be climate change sceptics?!

I think dogs are just little boys in disguise (or maybe vice versa). Connor had immense fun today shuffling through the autumn leaves on the footpath! I think he would get on very well with Peri and Gilly!

I like the sound of your plans for Spare Oom!

I also started watching Little Paris Kitchen and I love it as she such a clever cook in such a tiny kitchen. I should be happy with my kitchen.

I tried making the croque madame from the Little Paris Kitchen book :) I love watching her programme - quite an inspiration. I've not heard of Feijoa - that jam looks tasty though.