Do Labradors Dream Of Electric Crocodiles? 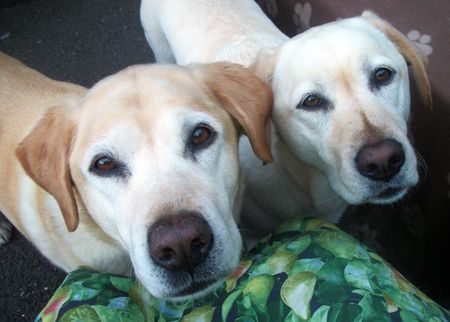 Peri decided she would impersonate a crocodile too. She is very gentle. Gilly has to wait and be second. She has a hard life. 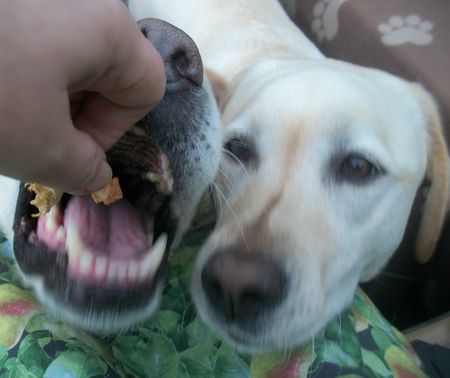 MrsDrWho's kittens would not have a bar of the crocodile treats, but Peri and Gilly are not so silly. A piece of dried crocodile is a delicious morsel to be savoured: it is wonderful!!!

MrsDrWho and I are catching up on the brunches we didn't have this year. Yesterday we wanted to have the divine ricotta blueberry hotcakes, but they were off the menu. Instead I had a breakfast take on Caesar salad and MrsDrWho had a fillet steak sandwich. It was really lunch. 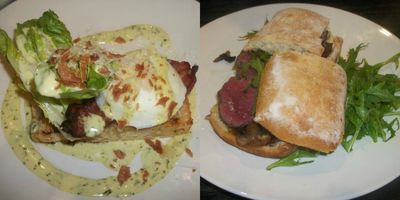 Ray Martin was signing books in Petrarch's book shop. The owner invited me to shake hands with Ray: I said it was nice to meet him and I had seen him on TV. I resisted saying I thought he was a tiny bit hypocritical to complain about John Safran lingering outside his house, when his modus operandi as a journalist had been exactly the same. Oh well. MrsDrWho 'kinneared' me with Ray. I am not poking him in the side, it's an illusion. 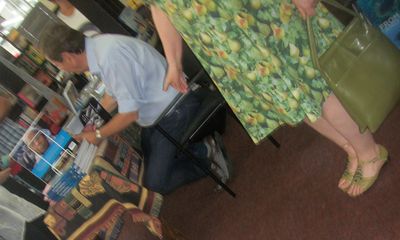 I finished my whooshy petticoat: voila!! 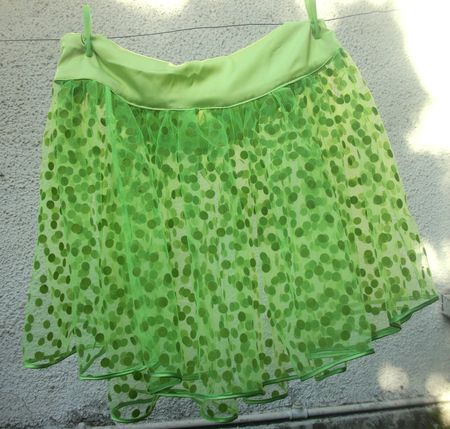 Here are some pictures of me revealing my petticoat, and believe me, this is as much of my leg above the knee you need to see. 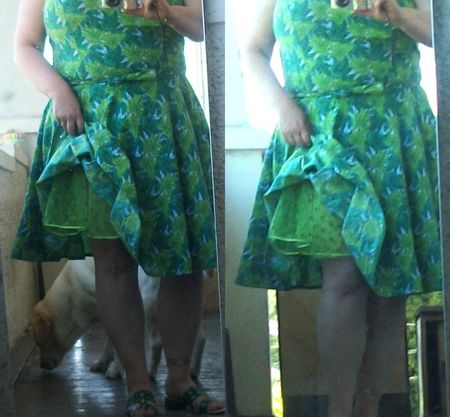 And here I am with petticoat in the first picture, and without in the second. My dress is not too pouffy, but it is definitely whooshier than without the petticoat. It wouldn't all fit into the photo.

NB Pretty much all pictures are WITH Labrador. 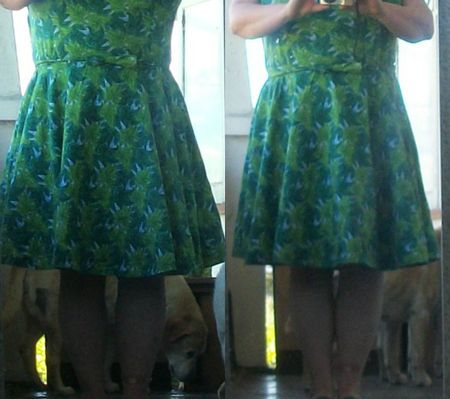 MrsDrWho bought us both an early Christmas present, so we can get lots of use in before the year ends. Mine has dogs, hers has cats and a few dogs. I love my new cup. 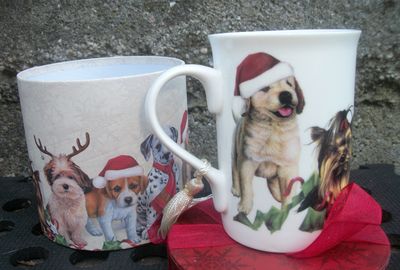 I am knitting secret things with this lovely mohair and silk 2ply. 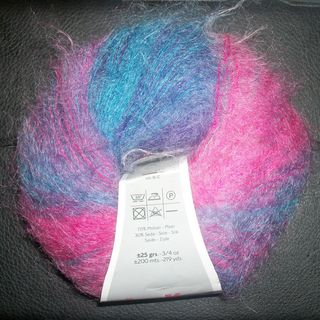 I am also Secret Sewing. I was very carefully collecting all the little felt offcuts and paper, and putting them into a plastic cup. Apparently when anything is in a cup, it can be food or drink, and when I came home my careful plan proved to be easily thwarted by Labradors. I cooked pavlovas for dessert today. They turned out well, but I used half the recipes and made eight  little pavlovas- Nigella used the whole recipe and only made six. They must have been giant individual pavs. Since there are five left over we can have them at Sewing on Wednesday. 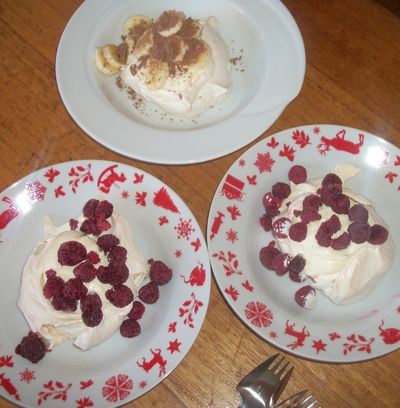 In good news, I found the original pattern piece for the front bodice of my dress. I can now perform pattern adjustments and sew my Green Strawberry Fields dress. Hurray!!!

On Thursday I went to see Annie The Musical. I had never seen the film or the musical, but I knew almost all the songs. The singing was fabulous, the cast wonderful and the music fantastic. The show lasted for 3 1/4 hours, with only a fifteen minute interval, but if you had asked me, I would have said I was only there for two hours.

The storm we expected didn't turn out to be too bad, and we made it through successfully. Thank goodness.

Last week I bought the glace fruit for my mum's annual Christmas cake. Peri, Gilly and I had to taste test the glace ginger. It is delicious, but the container has mysteriously moved from the kitchen to the computer desk tonight. I am being forced, forced I tell you, to eat the ginger. I convince myself that it is good for the digestion!!! Get thee behind me, ginger.

There is nothing else for it, I shall have to buy more ginger.

Oh, new boots!! A few weeks ago there was a 40% off the already low sale price sale and so I am the happy owner of a $28 pair of very comfortable olive boots. I am ready for next Winter: Winter is coming...... 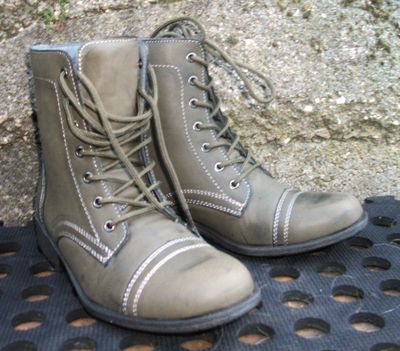 The petticoat does make a pretty, pouffy difference. You look ready to go out dancing. I like the funny kinnear photo- new vocab for me and not sure I used it correctly! You were very stylish in the green ensemble; I hope he took note. Crocodile treats- eek! I'm not surprised that the dogs loved them but the cats turned up their noses!

I love everything about your blog, hi to you all and smooches to the girls - I love their faces xo

Ooh all of my favourite things in one post! I LOVE your swooshy petticoat! And it definitely does make a difference! And pavlova! And boots! On sale!

and one of my least favourite things - I feel the very same way about Ray Martin. Quite the hypocrite.

Lovely boots and I wish winter is around the corner. We are having summer here and I can't imagine living through this heat for another 4 months. Thank goodness, I am going to Singapore for 2 months.

I love the olive boots, they look great. Glad to hear there was no outcome from the storm. Your pavlovas look delicious, one of my favourite desserts.

You have had a very busy week! Your boots are gorgeous by the way, so stylish :-)

your petticoat is gorgeous, such a lovely piece of frou frou!! and I LOVE LOVE LOVE your new boots, you always get such good bargains on footwear

love the colours on that mohair and silk :D

awww the girls look so cute wanting a treat.hmm never had crocodile before, would think its pretty chewy dried or fresh

its not a proper clothing photo with out a lab in the shot :p

It looks like it has been an eventful few days! Hooray for finding the missing pattern piece and also, those legs are looking quite trim! All the exercises must be paying off.

OH I love your petticoat.Does it make that fantastic shoulnd when you move? And the other extreme is Ray Martin. well dont really know what to say about him, I thought he was a bit too rough on poor old John.