Horton Hears A What??

Tonight was the final of Recipe to Riches, and here's my last review: Horton's Jangles, and before you ask, The Powers That Be preferred the name Jangles to spicy meat balls.

The box of frozen meatballs and a sweet chilli sauce was $6-99 for 400g. The pork and chicken spicy meatballs were delicious!! They heated in the oven for 10-15 minutes and then when drizzled with the sauce were a yummy treat. They would be a nice party food, on a cellophane decorated toothpick.

If you were pushed for time, these would be a great option. 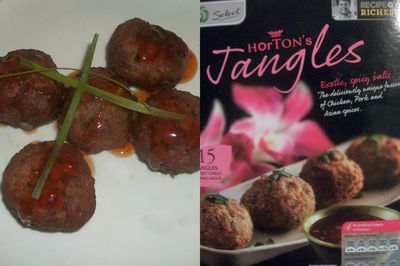 The winner of the series was the Chocorn. My knitting friends really liked it. I wonder if they will buy it???

I have been buying felt. The BlackSpot of Doomlight(tm) had felt on sale for $5 a metre. I bought some wool felt at that price instead of $25 per metre. That was a great saving. I only went along because MrsDrWho wanted some felt for her Christmas Craft at school. Mine already has dog hairs on it..... 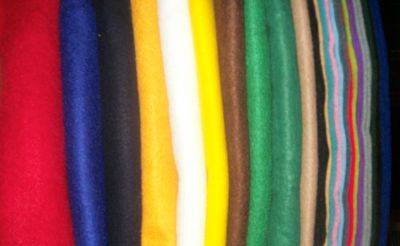 I made an interesting nacho bake for tea tonight. (I have fixed the link, I trust) It was delicious, I didn't add all of the kidney beans, but I rather liked the fact that I was able to use the spices in my cupboard, rather than a commercial taco spice mix. I added half a red chilli, but even then it wasn't too hot. The recipe says it serves four, but I think with some salad it would serve six easily. 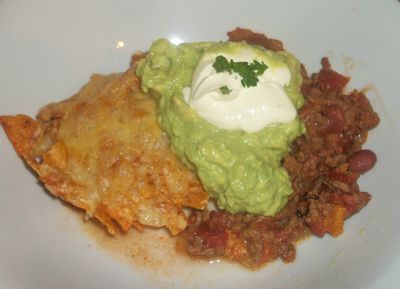 Peri and Gilly were inspecting a car at the dam today. I wondered where they were and then, Boo!!: Gilly came around the corner and then Peri appeared!! The photos were taken from across the car park at the dam, so they aren't very sharp. I love the expression on Gilly's face, she looks surprised to see me, while Peri is just happy and unconcerned. 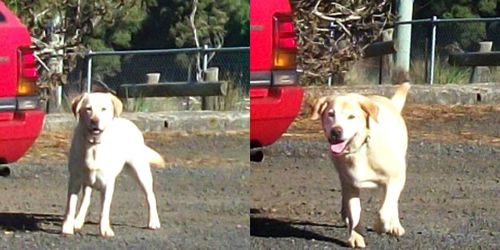 They did another circuit together before they certified the car as A-OK. 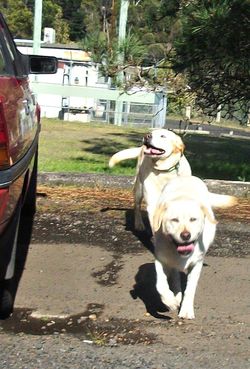 Peri has taken up residence at the fence again. She can spend all afternoon, lying in the Sun, with her chin resting on the horizontal bar at the bottom of the fence. She keeps and eye on everything that happens next door. 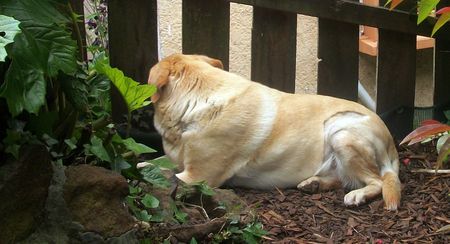 Though Peri watches, Gilly is the watch dog. When a delivery came from the garden centre to next door today, I went outside because I heard Gilly's Stranger Danger bark. As soon as I said it was OK, she stopped being on duty and had a nice drink from her outside bucket. It's her favourite tipple!! 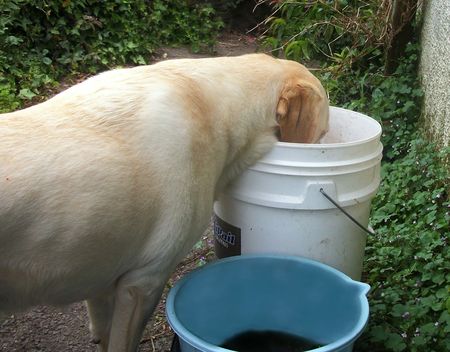 Every year when Vundy and Tori's roses bloom, I remember that I should have replaced Harki's stolen roses. I must make a note in my diary, I am not sure when rose buying time is. Anyway, this year I have assigned Harki the beautiful fragrant apricot rose in the front garden. Their roses are the velvety red Mr Lincoln for Vundy, the gorgeous Peace for Tori and then Harki's stand-in rose.

I am so glad I took the rose photo yesterday because we are having a storm tonight. We've been warned to tie down outside furniture, and batten down the hatches until later on tomorrow, when there will be thunderstorms. Last Friday we had the coldest November day on record. Of course we are lucky to be here and not in The Philippines. I can't comprehend the death and destruction caused by the typhoon. I am glad Australia is sending money and expert help.

Christmas is coming, where did the year go?? I have to brush up on my construction skills so I can make Ungingerbread houses at school. In MrsDrWho's class small groups are assigned special activities and I am making houses. 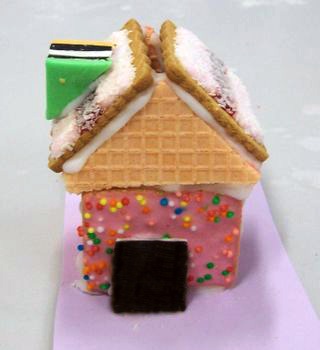 The Lovely Andrea has started a blog. I am hoping you will post some photos of her craft soon!!!

I must find my torch as the power often goes off in electrical storms here, and make sure all the windows are tightly shut before we all go to bed. It's all quiet now, but the worst of the storm is expected at 4am.

I hope the storm isnt too bad for you. We have been having lots of rain which is going to last all week apparently. The little house looks so cute, what a great idea. I have been avoiding Spotlight as I already have so much craft supplies it is getting ridiculous.

do hope you fared ok through the storm...love the gingerbread house, I bet the kids will have lots of fun with that ! lovely to see those happy faces again and the beautiful roses that evoke such wonderful memories :) hello to you all from the West xox

I hope you haven't blown away in the storm and woken up in Oz.

I didn't much like the look of the jangles, so didn't buy any, but now I wish I had! Oh well. If I'm lucky there will be some still at the supermarket next week.

You got a great buy on the wool felt! I don't think my local spotlight even stocks it, only the nasty acrylic pieces.

Nachos! My (not so) secret vice!

So funny that the girls checked out the parked car.....no bombs in your neighbourhood!! LOL

Peri is sweet too being such a sticky beak. Daisy's favourite place to keep an eye on our street is to sit on the back of our lounge & look out the front window :)

Youe nachos look yummt...I think I may have to put these on the menu in the next few days!

Lucky score with the felt. So many lovely colours.

hope the storm isnt too bad!
hmm an ungingerbread house...good idea. should do something like that since i am the only one who likes gingerbread and prob. should't eat a whole house myself :p

i still can't believe someone stole a rose :/

Back to another three days of rain here from tomorrow. I don't mind, it's needed but I can do without the wind we've had. One of the fires in the blue mountains has been declared officially out since rain over the weekend.

Jangles? I thought that was what NZ called footwear thongs, but I could be mistaken and it;s something different. Whatever. The meatballs appeal much more to me than the chocolate coated popcorn which also seems expensive for what you get in the pack.

Stealing your Christmas idea to do with my class!