And we would all rather I leave my hat and other garments on, rather than doing as Joe Cocker's lyrics suggest. Then the world can count itself lucky it doesn't have to poke its eyes out with a spoon.

I don't have a hat. I must avoid the Sun between 11am and 3pm as it has contraindications with my drugs. I wore a hat on duty at school and at sport and I wear sunscreen now, but wearing a posh velvet high hat to school as a child turned me right off them. Still, there are times when I need a hat. Lorenna Buck has a free Sun and Rain Hat pattern. I printed it out and sewed a hat. I used 60cm of 112cm wide material. It was on the sale table and there wasn't enough for a dress, or it would have been one. I sewed up the lining for the crown first and then I was able to make adjustments. I took it in about 2cm, but it is still a little loose. I think my head will expand with the heat in Summer, so bigger is better!!! I also spent a day fixing my Pear Dress. The armholes were too large and there was a weird fullness in the Princess seam that goes to the armhole. I learned why in my Craftsy course, and so I just did the best I could. I removed the facings. I had trimmed and snipped the seams so there was no room to manoeuvre. I made 5cm Pear material biased binding and used it folded in half to enclose the seam. I eked a little extra coverage by allowing the binding to show. It is not perfect, but now when I wear the dress I am happy my upper nether garment is not displayed for all to see.

I was disappointed to find that after knitting my gorgeous green cardigan, I didn't like it. It doesn't suit me. The scoop neck is wrong, the shape is wrong and the length is very wrong. So I have sighed many sighs and now I will unravel it. 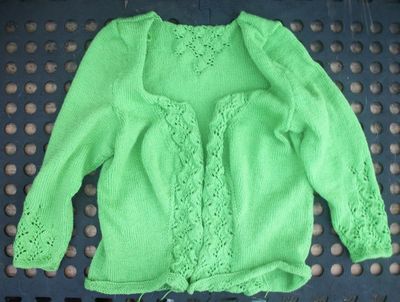 We are nearing the end of our year's Block of the Month quilt. Last week we sewed Disappearing Nine Patch block. Mine was not quite right, I didn't have clear instructions and so I just added some strips in the centre. In case you are ever making a 12 inch block, your nine small squares need to be 4 3/4 inches.

There was some consideration of going to The Craft Fair at Deloraine, but I can't seem to get rid of my cold and if I am not in tip-top condition (for me that's probably 50% of normal) I just can't keep up the pace, no matter how slow it is. Maybe next year. In some ways it is good to have a rest year and then I really appreciate the craft even more.

I only have two more Recipe to Riches reviews and next week it is the Grand Final. Well, RudeBoy Ribs (sauce): I was very disappointed that after a whole show of being shown ribs, of ribs being 'batched up' ribs tasted, ribs' packaging designed and ribs launched, that the actual product for sale was RudeBoy Rib Sauce. The packaging entreated the consumer to use chicken wings or eggplant (blerch) and I could not buy a rib to save my life in Woolworths, even after they promised the would find some for me. In the end I found some at Coles and I cooked them. Woolworths said there was a shortage of ribs, and I think maybe they should have thought of that before they chose Ribless Rib Sauce.

To the ribs then: you boil the ribs in stock and then baste with the sauce and cook for two hours in the oven. The packet was not clear as to what 'a serve' was and I only used one sachet of sauce. In retrospect I could have used two. The ribs were delicious!! If I find ribs in Woolworths I will buy them and use up the rest of the sauce. I would have been even happier if the ribs were already in the sauce in the meat cabinet and all I had to do was heat them up and finish them off. 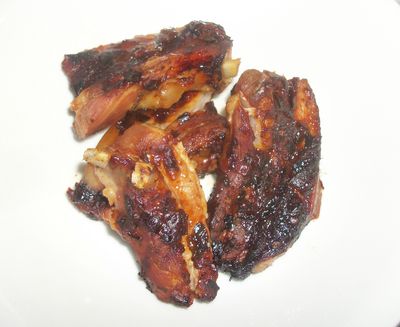 Peri and Gilly have been eating enough grass to qualify as graminivores. Gilly wasn't very well later in the day and I remembered reading that pumpkin was soothing for dogs' stomachs. I quickly microwaved some of the cute pumpkin my neighbour gave me. I mashed it up and fed some to Gilly and Peri. I am not sure if the pumpkin did have a soothing effect, or if she was just happy to have extra food, but half an hour later Gilly was as bright as a button again.

The Labradors are not used to boisterous boys, even though they are pretty 'girlsterous' themselves. Gilly looks very worried about the game Rafa and Sandy were playing, but Peri is just daintily moving out of the way. She's smart!! The boys are only playing, no-one every growls and it is waggy tails all round. 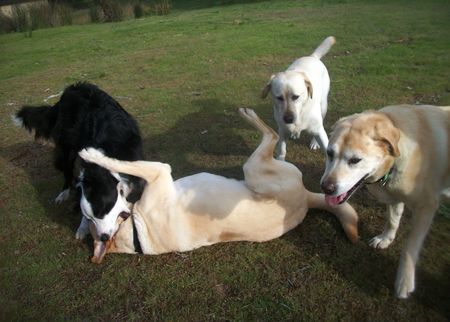 MrsDrWho has been writing reports and so I furnished her with some Kiss Biscuits to ease the pain. I've also already cooked this week's Friday Food too. How organised is that??? 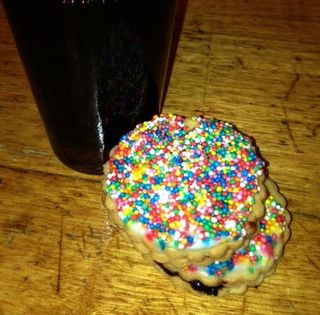 I went to the Exercise Physiologist on Friday and surprised myself with my progress. It seems that once you read a certain point the improvement is incremental. Now I don't just balance on one leg, I have to have my arms out and lean forward in a kind of arabesque and hold my balance for thirty seconds. I can only manage a few exercises every second day, but it all helps me stay stable and flexible.

Our weather has been crisp and cool when we walk, and then warm and sunny as the day progresses. Not too hot, but I have to wear cool dresses and have the air-con on '2' in the car. The nights are still relatively cool, too cool to plant tomatoes yet. I know things like that, yet I can't even grow Rosemary which is so hard to kill. It is a puzzlement!!!

I've read this twice, but my eyes are tired and itchy. I'll fix any blatant errors tomorrow.

Sirius was copiously sick in the car this morning, it must be that time of the year :( She seems fine now, just grumpy that I have not fed her this evening.

Nice hat. I thought it was a salad at first :) I wear a hat in the summer and have collected a squillion of them, ahave also recently bought a pattern and cute fabric to start making my own. I have very fair skin and I am not getting any younger!

I have watched all of RtoR and although I like the concept I don;t really get the winners, and haven't bought any of them. I don't like ribs, actually, and would prefer to make my own sauce. But I admire the point of the programme.

We haven't had much hot weather in Melbourne at all yet, thank goodness, but I am going to Sydney for three days and it is forecast to be hot and humid, yucky. May have to expose lily white legs :)

hmmm now i want ribs lol :p maybe tommorow if I feel like waiting for them to cook

sky is very vocal when she plays, and she can play rough but if it gets too rough she def. lets the other dogs know to calm down :p there have been a few flashing teeth, but the other owners always are fine with it, say their dog needs to learn its boundaries. she never bites the dog tho, and is pretty tolerant of puppies

What a cool trompe l'oeil hat. Glad you could fix the pear dress, but such a shame having to frog the beautiful green sweater. But it's better to re-knit into something you can wear happily. The girls look like contented cows grazing!

love the hat and the dress...the girls look like they're enjoying the melee ! ahh, kiss biscuits, one of my all-time faves xo

That really is a gorgeous green cardigan. What a shame it doesn't suit you.

Oh, I am so sad about the green cardi! I don't think I could bear to frog, but I guess that is better than not wearing it at all. And it looks so pretty :-(

Well done on your improvement in your exercises, what a good accomplishment.

I would however, be incredibly annoyed after doing all that cardigan knitting and then find it doesn't fit right. How rude! Something like that would probably have taken me an entire year to knit though so I would still wear it, maybe just around the house over my pyjamas.

Lovely hat :) It is a shame about your cardigan - it does look pretty. Shame you can't add a collar on or something to detract from the scoop.