Ouch. Just over a week ago Peri and Gilly and Sandy ran to greet Rafa as he came through the gate at the dam. It was classic Silent Movie as all three ran right past him and towards the smelly dead thing up the road. Rafa just turned and looked at them, nonplussed.  As I was striding purposefully towards them I trod in a hole, hidden by the grass growing over it, and really hurt my ankle. It was taking a long time to heal, and though our Nurse at LSG and the Exercise Physiologist looked at it and said it wasn't broken (thank goodness) I went along to the physio today. 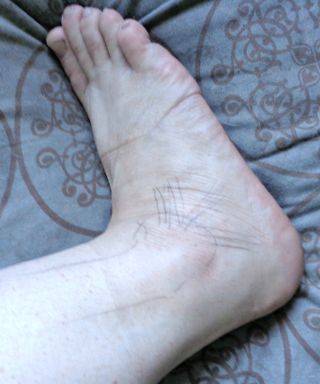 He drew on my foot to illustrate the underlying structure. I have torn about one third of my ligaments, which is good news really, and I have two exercises to do, and I don't have to go back. Of course my ankle really hurts tonight because I have been doing my exercises!!!

Peri and Gilly are very happy because it has been cooler for the last few days. The weather forecasters keep promising rain and coolness, so we have our fingers crossed. Gilly has been spending a lot of time in the paddle pool, and Peri has been lying under the buzzy bushes. She gets covered with them. I think she likes having them brushed out. 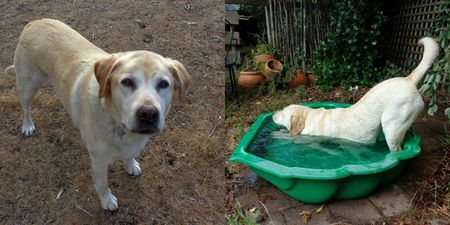 I sewed a dress for Toddler Zoe's second birthday. It is from an old pattern book given to me by MrsDrWho's mum and is translated from Japanese. There were no instructions, just a pattern to draw. Luckily it fitted her perfectly and she looks as cute as a button, click though to see!! I bought some old fashioned looking quilting fabric and made the dress with French seams and Hong Kong binding. 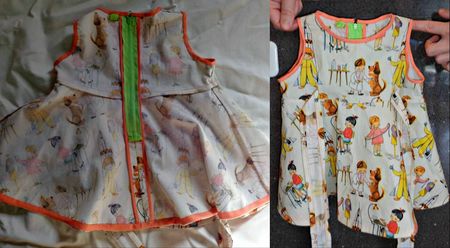 When Toddler Zoe's dad was a little boy he loved the But Not The Hippopotamus book.

I knitted an armadillo for Toddler Zoe as well!!

We started sewing our Block of the Month quilt for 2014. This year we are picking blocks we like from some free BOMs. The first block is a Wonky Star with different centre options. I'm using a combination of St Patrick's Day fat quarters and some lovely Australian themed prints. There are kangaroos on some of the wonks!! MrsDrWho is using a Laurel Burch Mermaid set and MrsReno is making babies' quilt using blue, yellow, pink and green blocks. 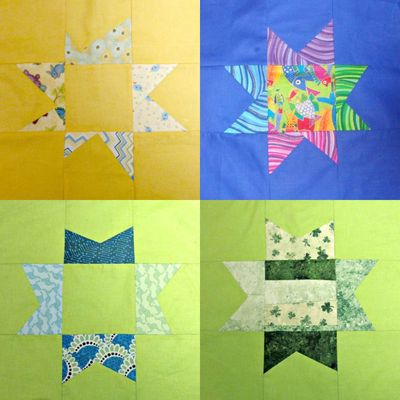 I sewed a Microwave Bowl Holder for MrsDrWho at Christmas. Sadly for her, she's not really been able to use it because Caramello has decided that it is a special bed entirely for her benefit. The Insul-Bright makes a great crinkly noise. I am going to have to sew MrsDrWho another one to protect her from the searing heat of a bowl of microwaved food. Fingers crossed, my Internet Problems seem to be properly sorted out. I have been able to lie in bed and watch hours of Ice Skating from Sochi on my Ipad and stream radio on my computer without it dropping out. Huzzah. I just wish the very competent and efficient people I ultimately spoke to could have helped at the start.

Tomorrow I am off to have my hair cut. I have not been able to brush it properly for the last few days because I killed a Huntsman spider, which we always called tarantulas when I was little, with half a can of fly spry in the bathroom. Oh I made such an awful noise when I had to make the link and see a spider on the page even though I was squinting, that Gilly came to save me: she's a brave girl!!

Anyway, it died on my brush and I covered it with a piece of paper. I have had to use a new brush and stand far away from the mirror and the dead covered spider. Not a good resulting look. I have another Huntsman in the car and one on the dining room ceiling. I can't spray that in case it falls on me. I have a BIG spider phobia and can't bear even thinking about the way their legs move. Eeerk.

I did accidentally mark all the Blog posts on my Bloglovin' as 'Read' so I have just made a comment or two and moved on. You just can't go back.

And last, but not least, I made another Donna Hay ice cream slice for supper at Sewing. 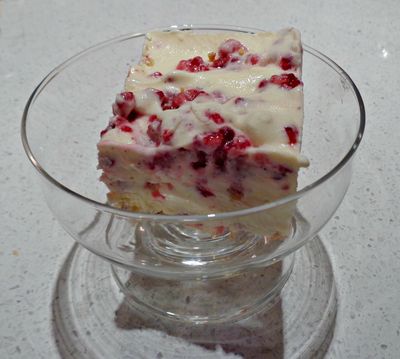 It's Raspberry Ripple Cheesecake Ice Cream slice. Here's a quick precis of the halved recipe. First smoosh together 125g raspberries and 80g pure icing sugar to make a kind of puree. Make a base by mixing 200g crushed biscuits (I like Granita), 40g melted butter and 40g pure icing sugar. Press into a lined 20cm square tin. Freeze till needed. Then beat 125g Philadelphia cream cheese with half the seeds from a vanilla bean for 6-8 minutes. Add 125g fresh ricotta and beat till just combined. Slowly beat in 1 litre softened vanilla ice cream. Gentle fold in half the raspberry mixture and spoon into the tin. Then swirl the rest of the raspberries on top. Freeze for at least 4 hours and it is ready to eat.

do hope that ankle is better soon xo lovely pics of your sewing and knitting and those beautiful girls of yours and what a sweet puss xo love from the Mainland ;)

Ouchie and again, ouchie! I hope that heals quickly. I trod in a hole like that at a funeral in a lawn cemetery but fortunately did nothing worse than making a spectacle of myself.

Toddler Zoe looks lovely and how good to see her. The armadillo is cute, very cute.

I love the photo of Gilly cooling her stomach. So funny.

I put a link to a Rav forum for your coconut icecream so you may find some extra visitors.

I love the armadillo. Too cute.

I too,have been enjoying the cooler weather

Oh dear...I hope your ankle will have a speedy recovery!!! I sprained my leg not long ago too but walking on a wobbly and painful leg ain't fun :(

That dress you sew is sooooooooooooo cute!!! I wish I can sew better so that I can make cute little outfits for Sabina!!

Ow! Your poor ankle. Ankles are tricky things - wishing you a speedy recovery. The armadillo you knitted is adawbs, and I could really do with a raspberry icecream slice right now.

hopefully this is the end of the net problems :)

you can have some of the rain from here, going to have to build a raft soon and use that instead of the car :p

Oh, poor ankle. Thank goodness it is not broken, that would have been a disaster! I love the Not the Hippopotamus book! I have not seen it before. Very cool. The fabric for the dress is adorable. And the dress is even more so. Zoe must be getting big and hopefully healthy now! Caramello looks like she is in love and trying to warn away the photo taker all in one expression.

As usual Cindy you have been very busy!! I'm sure Toddler Zoe will love her new dress & oh so cute armadillo :)

Sorry about your ankle Cindy, I hope it heals well soon. I have also been in the wars with a knee injury. I saw the knee dr this week & pending an mri it looks like i'll have to have surgery. not sure yet whether it'll be the easy outcome or the more involved outcome.....I'm hoping for the easy option!!! my son's wedding is on the 8th March, so i'm not too happy that i'll probably have to have my infusion AND surgery in the week of the wedding :(

I hope your ankle is feeling better now, I'm so glad you didn't break it.

Zoe's dress is divine! I say again, you are so clever! Such a good seamstress!

I'm glad you have sorted your Internet. I have been watching the ice skating too, from hospital. It has been nice to have some interesting to watch in the middle of the night!

I had to scroll down when you mentioned your ankle on a later post- somehow I had missed this one. Glad you are on the mend now!
OMG- I happily coexist with smaller spiders but would scream and run like mad if one of those spiders was in the vicinity! How did you eventually dispose of the body???