Well, last week when I said The Internet, The Broadband and The Wireless were fixed: I was wrong. I think they are all fixed now. I am not dwelling on it.

The ice cream I made for Knitting Curry Day was warmly, or cooly, received. Today is is warmly and tomorrow it will be hotly, so I decided to go with something that was quick and easy: No churn coconut ice cream with a toasted coconut embellishment.

You'll need some airtight containers, I used the take away kind from the supermarket and almost filled two 1 litre containers.

Whip the cream until stiff peaks form. Then with the speed as low as possible, pour in the condensed milk and the coconut milk. I chilled the two tins of milk to help the ice cream freeze a little more quickly- well I like to think that anyway. Turn the speed up to high for a few seconds to make sure everything is properly mixed.

Pour into containers, seal well and then freeze for at least 5-6 hours. Of course overnight is better. 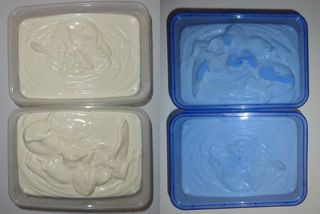 Meanwhile, place the shredded coconut on a foil lined tray and place under the grill. You have to watch it like a hawk as it can go from not cooked to burnt-to-a-cinder in a split second. When it was half as toasted as I wanted I mixed it together a little to help it brown more evenly. You toast it until it is the colour you prefer.

Then seal in a container. 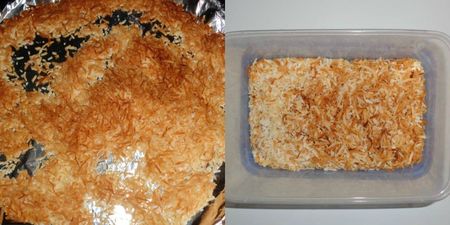 Serve the ice cream with the toasted coconut. 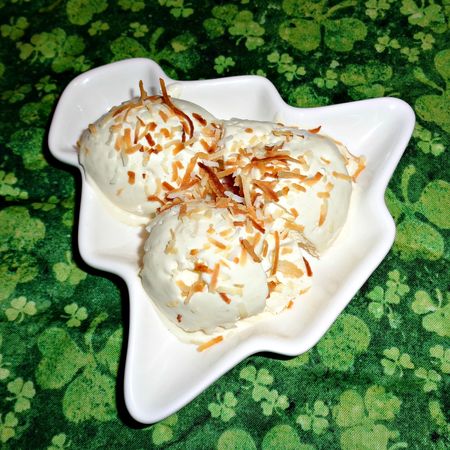 It is also absolutely delicious with black sticky rice. Yum. Please excuse the messy bowl, I had seconds and I don't usually even eat dessert. 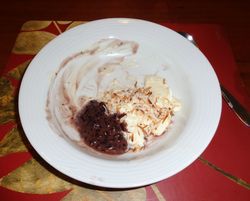 That looks delicious. I eat very little ice cream but could make that when grandkids were here as there's no gluten in it. Commercial icecream is not GF. Actually grandkids could make it themselves.

Well how easy is that! And sounds delicious. Will have to give it a go. I might even have all the ingredients in my fridge/pantry already!

Oh my goodness! That really does look amazing.

Oh you are a temptress! That sounds deliciously decadent :)