On the Taste.com.au site this is called a Wagon Wheel slice, but Wagon Wheels have biscuit on the top and the bottom. This is more of a Chocolate Royal slice, or if you aren't a fan of royalty, which I am not, Chocolate Republic Slice!!!

Chocolate Royals have a biscuit base topped with sieved raspberry jam, pink or white marshmallow (pink for milk and white for the dark chocolate) and then smothered with chocolate. You have to pop off the chocolate shell covering the marshmallow intact and eat that first, then the marshmallow, then nibble the thicker chocolate coated biscuit edge and then finally the base. Well that's what I used to do!!!

The first time I made this I was in a dreadful hurry and put the slice in the fridge to cool. Big mistake. The marshmallow seized and the chocolate topping went with it. Not a pretty sight, but MrsDrWho and MrsReno said it still tasted fabulous.

I made the whole recipe for the base but I didn't use it all, maybe 80%? I prefer a thinner base. You can use any berry jam and I think the pips should stay in.

Cut the marshmallows in half with a pair of kitchen scissors with lightly oiled blades. To cover the base in my slice tin, 26 x 16 cm, I needed 30 marshmallows, halved. You can't buy a packet of white, we only have mixed now, but I think it looks pretty. I'm also impressed that 1/2 a cup of jam actually was plenty to cover the base. Usually I add more!!!

The recipe says it makes 12 slices, but I think it makes more.

Cream the butter and sugar until it is pale and light. You can see the difference in colour before I cleaned the side of the bowl. 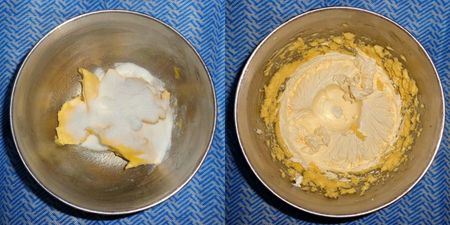 Fold in the flours until a soft dough comes together. 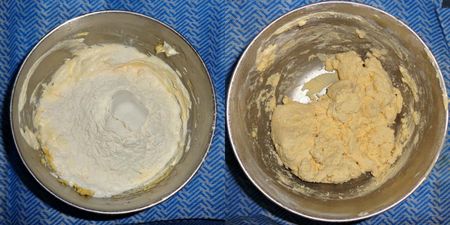 Press into the base of the tin. Bake for 20 minutes or until it is golden. 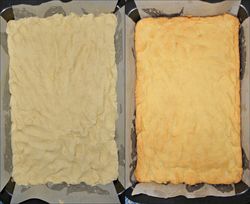 Don't turn the oven off. Spread the hot biscuit base with jam, and ready the marshmallows. 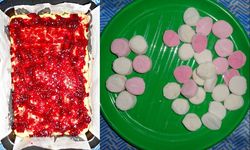 Cover the jam with the halved marshmallows, cut side down. They need to be close together. Pop the tin back into the oven for 2 minutes, although mine took 5 minutes at 160*C, until the marshmallows are melted. Smooth down if you need to, but mine covered the jam pretty well. Cool completely in the tin. Melt the chocolate and butter in the microwave or in a glass bowl over simmering water. When it is smooth, pour over the marshmallows and refrigerate for 2 hours at least. It is best if you take it out of the fridge a few minutes before you want to cut it.

As I wanted to post my recipe, I cut the slice after an hour, using a hot knife with tiny serrations. The chocolate topping was still a little soft, but it was OK. I admit I tasted a small piece, I should not have really, but it was so tempting. 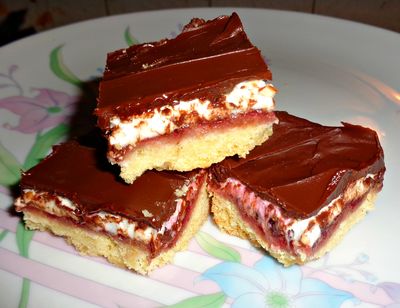 Does look delicious! Our kids will love making it!

Oh that looks so delicious! I love Marshmallows, and chocolate. I think I need to give this a try some day, when a cheat day is in order.

royals look like tunnock's tea cakes and wagon wheels everytime I have had them have had biscuits on the bottom, and they were bigger when I was a kid :p lots of sweet thing to eat :)

Drool!!! I so, so want this - and even better if someone makes it for me (ha, as if that will happen).

I love chocolate but have never been a fan of marshmallows. Think I'll go have a piece of Tim Tam now :P

That looks ever so good. Those marshamallow-y chocolately things are yum.