I paid the price for living life in the medium lane, I can't manage the fast lane. Saturday was a day of enforced sleep and headaches. Twenty hours of almost continuous sleep, I did get up to feed Peri and Gilly, did the trick and I felt much better on Sunday. Of course I didn't do anything on Sunday, which probably helped too. MrsDrWho was flying the Yellow Flag of Quarantine as visitors had been extremely unwell. I was happy to stay away from the house of actual physical sickness.

Enforced rest on the couch has produced a hat and three quarters of a mitten, I can't quite bring myself to sit on the couch and do absolutely nothing all the time. I tried on a hat at Knits Needles & Wool last week and it didn't look half bad. I remembered some Tasmanian handspun emerald green 12 ply at home and so the Hat's The Way, Aha Aha, I like It hat was born. I made stripes with the leftover Azteca from my Cowling Occupants neckwarmer. I had a false start and a false end but it turned out very well: it is warm and water repellent and not unflattering. I've written the basics of the pattern on The Ravelry. I wear it with the naturally rolling cast on edge rolled a little further up.

And now the third of my almost matching but not quite Winter set: Cowling Occupants, Hat's The Way and now the Transpodsters. Well three quarters of one. In The One With The Embryos the question Monica and Rachel need to answer for the win, and the flat is "What is Chandler Bing's job?" and Rachel answers "A transpod-transpondster!" and while this is patently untrue, it is an excellent name for the Podster mittens. I'm not making individual fingers inside the flip top, just a longer ribbed pieces for all my fingers. I am knitting them in 10ply Naturally Loyal in a warm teal. The thumb has a 'finger' of its own. The colour in my Ipad photo in pearl lightbulb light isn't true, but the hat, neckwarmer and mittens all co-ordinate imperfectly. 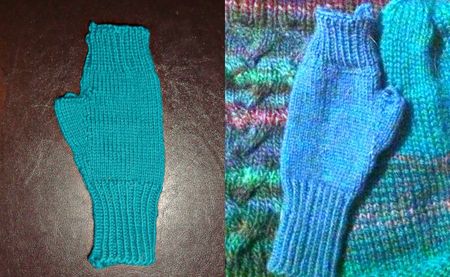 MrsDrWho's Girl With A Purl Earring socks were completed and may be adorning her feet as I type. I have no idea, as every person and their dog moved over the Easter/ANZAC Day/School holidays break and she has no phone or internet. She's pretty much moved in and the house is becoming a home, and it is a wondrous house: Cleo and Caramello are semi-happily ensconsed and Muppin comes out of the bedroom to see people she likes. That would not be me, the mean woman who takes her to the cat sitter and the vet. 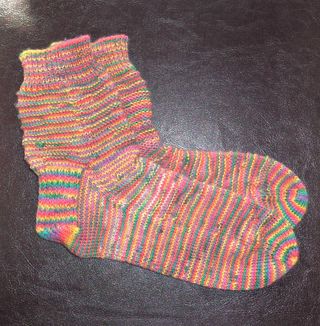 Peri and Gilly have had a wonderful few days. There was a frost at the dam on Saturday and we walked in the rain today. It has rained all day and I spend fifteen minutes cleaning the gutter outside the gate so we didn't get flooded again. 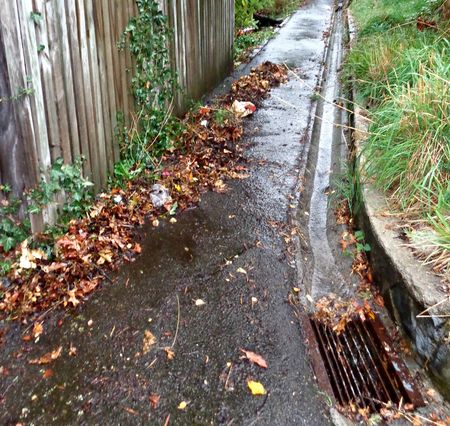 I am getting a cold, or Peri and I have hay fever. In Autumn. And it has been 19*C. That's too warm for Autumn. 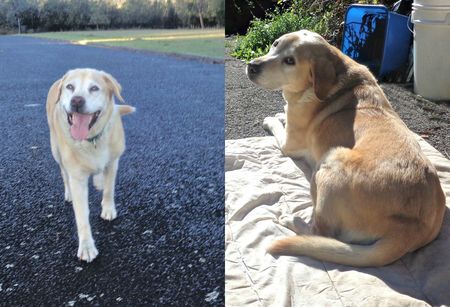 Peri has been very happy, lying in the sun and playing in the freezing cold weather. She's channeling a film star with her cheeky over the shoulder look. When she runs at the dam it is hard to remember she is twelve years old.

Gilly hasn't been close enough to take happy pictures, she's been off running as fast as she can to keep up with Rafa and Sandy. They are much bigger and should be faster, but Lorelai Gilmore is surprisingly fleet of foot. When she is ready for her close up, she looks worried, and I don't know why. 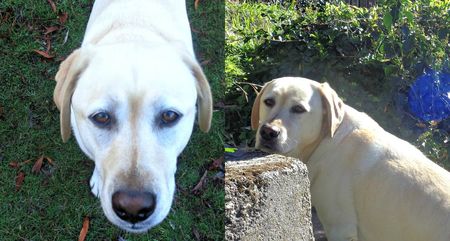 I've been for my two monthly check up with my GP, where I realised that it is ages since I even thought about how long it takes up to drive to the dam. When I was depressed and anxious it HAD to take eight minutes, or else. "Or else what?", my GP asked, and I had no idea what, only that it was going to be terrible if it took nine minutes. I am always happy when my numbers are the same, not up or down, not better or worse, but the same. The same is not good, the same is awful really, but as long as the numbers are not worse, awful is great.

Oh and I am living in The Future, in Star Trek or Stargate SG1. I wondered what the microphone next to the space bar on the pop up Ipad email keyboard was for. It is for speaking to, and then it types your email for you. I press Reply, tap for the keyboard to pop up, press the microphone icon and just chat away to the Ipad, or I imagine it is Siri. I tap Done and my email magically appears. I have to fix a word or two, but I never imagined I would be living in a time when I could do that. It's amazing. Truly mind blowing. Of course in Star Trek they just say "computer" and it responds, but I have to tap my Ipad for Siri or email. I expect soon I won't even need to do that. This week I have also learned to take a screenshot on my Ipad and save PDFs to iBooks.

Now we just need a Back to the Future Hoverboard and a transporter and we're done!! Oh and FTL space ships. Then we're really done.

I have never seen Fast Times At Ridgemont High. I don't expect I will, though Seven Brides for Seven Brothers in on TV this weekend.

haven't seen fast times at ridgemont high either, dont feel like i am missing much :p

the girls look great in their photos :D and hopefully it is just hay fever, you dont want to be sick again :/

i cant sit and do nothing on the couch either, doesn't matter if i am sick i must do something lol

I'm glad you are over your unwellness. You still manage to do so much! Cute green accessories and stripey socks. I love Peri's coy look! I bet if I took the time to fiddle around with my ipad it might do the amazing things yours does rather than the bare basics I use it for. Maybe over summer break...

I love the hat - it is very cute, especially with the rolled brim :)

Yay for happy outside times, and feeling okay again. My dogs are pleased to be allowed inside to sit in the sun in front of the window, and grateful for every non-dreadful-weather-morning (I do walk them in the cold or drizzle, but not pouring rain or horizontal sleet).

Much biscuit baking here this morning, plus there will be chicken tofu meatballs for the freezer and lasagne for tonight. Ah, the holidays...

I can't live in the fast lane either ,so I understand.
The hat is lovely,looks very snuggly and warm.

Yes,the voice thingy on the iPad is amazing. I use the same thing on my phone to make lists. Very useful.

I don't have a microphone on my iPad keyboard :-(
I must be living in the slow times in Ridgemont High!
I love the screen shot option, I do that for Internet based patterns, so I can access them when I'm out (I only have wifi iPad, not 3G). Very handy!
I love that your hat, cowl and mitts match but are not the same. Excellent yarn choices!

Wow, that sounds a bit flash, self typing emails!

I'm glad after the marathon sleep that you felt a bit better. Hopefully the lurking cold is actually hayfever! A much better option even in its annoyance.

You have been knitting up a storm! I wish I was a quick knitter. Or even just a successful knitter. I am still working on my blanket, I'm starting to get sick of it because it is getting closer to the end and it has now taken me 4 months so far to get to where I am. Soon I tell myself!

I'm not living in the fast lane either Cindy!! It takes me five minutes some days just to walk to the kitchen!! LOL

Gilly does have a worried look....what a funny girl :) Peri is amazing for her age! I love the film star look too!

I love the movie Seven Brides for Seven Brothers. I guess it probably isn't on up here.

I love all your knitting & hope you're feeling better Cindy.