Well, The Typepad was down due to a Denial of Service attack for two days. I just thought the rain had flooded the pit with the internet wires again. But no, my internet wasn't slow to load, The Typepad was just not working. I must pay more attention!!!

I have been rather tired today. The Ipad alarm went off at 6-30am, 7am and 7-15am to ensure I was at MrsDrWho's house before 8am. Today was moving day, and my very important job was to take the three cats to their luxury off site accommodation. They meowed, or caterwauled, the entire way. I think they thought it was vaccination time. The Cat Sitter prepared a special inside room for them to share, with a heater, the radio, beanbags and special calming spray. Cleo immediately worked out the exit and proceeded to sit there, waiting for a chance to escape. No chance Cleo. Caramello was instantly ensconced on top of the filing cabinet and Muppin hid behind the beanbags. It was a coup that she came out of her carry case at all really.

I visited MrsDrWho's house and contributed absolutely nothing to the unpacking. The movers were very efficient and moved everything today, they don't need tomorrow. I did contribute some chocolate cupcakes and banana muffins. Oh and I made a mushroom and spinach lasagne the other day. It was delicious!!

Last Friday Peri, and then Peri and Gilly, went to the annual party at the fence. I took a poor photo, or two, but they show Peri's tail is wagging faster than light. It has been raning on and off for the last four days, so they enjoyed getting endlessly wet. 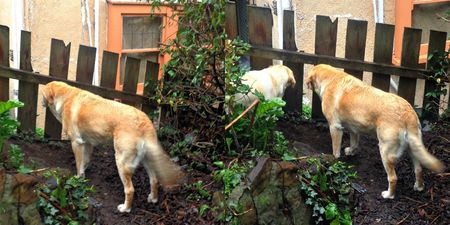 On Sunday they had salmon and some soft boiled eggs in the shells. Peri was not keen to eat hers until Gilly gobbled her egg up. Then Peri wanted hers with a desperation heretofore unseen!! 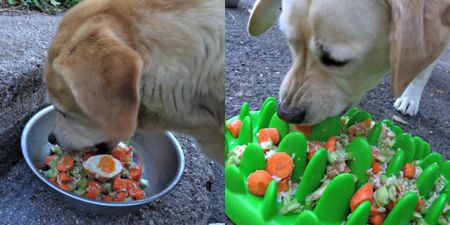 I had one ball of Katia Azteca in all the greens (apart from one patch of grey that appeared from nowhere) I knitted a neckwarmer. Instead of decreasing to make it narrower, I went down a needle size every repeat: 8,7,6,5.5, 5, 4.5 and finally 4mm. The first time I cast off with a larger needle, but it was too frilly: on the left below.The second time I went with the needle I was using and it was fine. It is a tight squeeze to get it over my head, but I knitted it longer so it would cover my nose, bushranger-style, on really icy cold mornings. 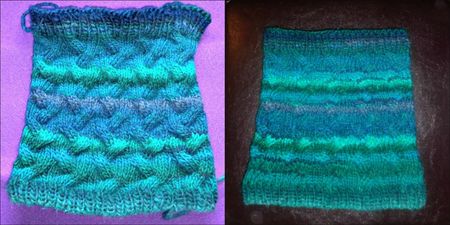 You can see the cables more clearly in the first picture, though the colours are more accurate in the second.

While I was talking to my mum on the phone last night, this happened: 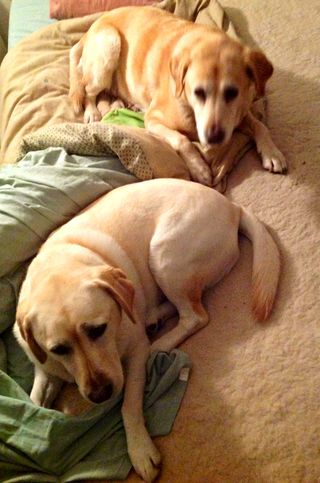 That would be the sheet, doona, Peri's quilt, Peri and Gilly - all on the very edge of the bed, and nothing but the woollen underlay everywhere else. They like to make a comfortable nest. Together. As a team. Thank goodness they don't have opposable thumbs!!!

And now, before the bed is reconfigured, we might go to bed and go to sleep early. Tomorrow I shall be measuring MrsHouseOf for her last year's Christmas skirts, now it is cool enough to sew again.

I think you should put together a book of all those doggie antics - it would be a best seller !! The pussy-cats are very pretty - hope they were ensconced well away from the doggies ;)

Sky does the same thing with all her blankets, they can't be folded in a comfy pile, nope :p

love the colours in the neck warmer:)

Goodness, if your dogs had opposable thumbs they'd take over the world! Funny girls!
I bet your baking was very appreciated by the movers. Such a tiring task.

I had a good laugh at the bed reconstruction. Daisy attempts to do this to me when i'm in the bathroom getting ready for bed. Thankfully there's only one of her so she doesn't do too much damage!!

I assume Gilly's 'bowl' is to slow down her eating...does it work Cindy?

Wow that annual party seems to have come around quickly this year!! I'm beginning to lose all sense of time as my days seem to blur into each other.

I'm glad MrsDrWho's move went OK...looks like you fed them all well! I hope the cats are home comfortably from their 'resort' :)