It's A Long Long Way From Mayall To December.

Well, there was an outing/commitment splurge last week, and I ended up having a day in bed on Friday. It did the trick too. It is ironic that when the weather cools and I feel the happiest and healthiest, I end up doing too many things and have to rest up. Still, Peri and Lorelai Gilmore are trained to nap and they slept on the end of the bed all day. They are good and faithful animal companions.

The weather has been so wonderful: it was so warm and sunny on Thursday afternoon that Peri had to lie in the shade as she was too hot. Gilly sat next to me, in the Sun, and I read a book. Very civilised. The mornings are cold, frosty and foggy. We don't mind. I rug up and The Labradors revel in the icy grass when it cracks under the paws. How they can bear the chill I don't know, especially when they have to be under their quilts, warm and snuggly, every night.

Peri loves to roll, and she's pretty choosy about where she rolls. I agree with her choices, she's as clean as a whistle. 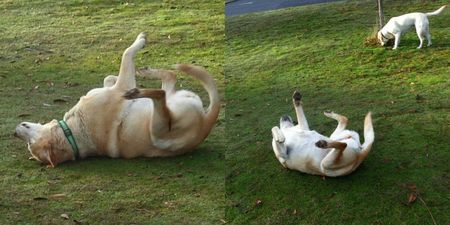 Gilly? Not so much. She watched Peri roll, and then chose the yuckiest place and rolled in something horrid.

Peri was feeling eminently superior. She was also being dominant, just to put Gilly in her place, when she heard me being cross. 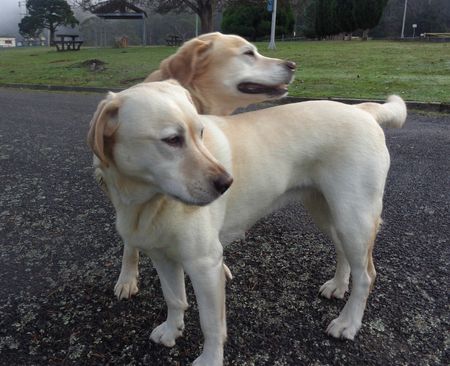 Peri is the bravest and most adventurous of the Dogs That Walk at The Dam. The workmen had left and so she ran up the steps to the Look Out and found a lot of water to play in. Gilly was down the bottom of the steps, missing her. 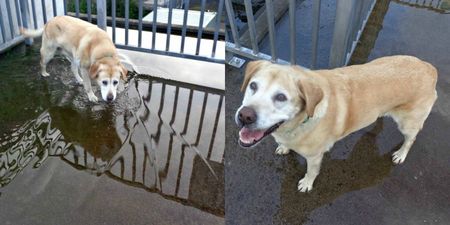 Last week we made what I like to call The Film Strip block for our 2014 quilts. I cut mine to the pattern's requirement, but it was fiddly and as MrsDrWho and MrsReno were in the midst of report writing, I modified it a little. I think my iPad photos are just a LOT wonky!! It was a nice easy block to sew.

Knitting has continued, though not apace. I am making another of these, but using red so it is an angry Ood. I was blithely knitting away when I realised I had joined in the round after the dark grey rib, and I hadn't made the split in the cream. Bah humbug. So I just continued on, finished the red and cream border and then picked up the row of stitches before the grey and cut the bottom off. I just knitted downwards and cast off after the grey rib. Worked like a charm, thank goodness. 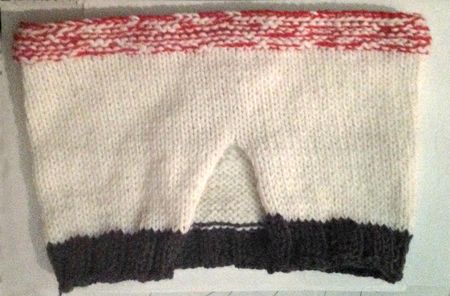 I made some delicious lemon curd. Onyi gave me some lemons and I used this recipe. I only made half the amount, but I paid careful attention to when the curd coated the back of the spoon, and it wasn't terribly thick when that happened. It set beautifully in the fridge, and was creamy and so tasty. I made a three-egg sponge and served it with the lemon curd and cream. I really appreciate the gift of the lemons, they are $1 each and I so love using them in all my cooking, savoury and sweet.

We have nothing planned for tomorrow or Friday, so I think more rest is required. I should organise my iPad so I can leave comments on all blog posts. I am so spoiled to be able to lie on the couch, or in bed, and not have to sit at the computer desk.

I was sad to learn of Rik Mayall's death. I was living in a small mining town with lots of people from other countires and someone's friend sent them videos of The Young Ones recorded from TV in the UK. We saw it before it was screened here. It was not The Goons, or Bless This House or Some Mothers Do 'Ave Em. It was something completely different. I am not sure if this is an apocryphal anecdote or not, but I read that Rik and Ade Edmonson wanted to call their show 'Bottom', 'My Bottom", so that every morning after the show was on TV people would ask each other "Did you see My Bottom on TV last night?".

really like tribute to rick that Ade wrote: ‘There were times when Rik and I were writing together when we almost died laughing.

‘They were some of the most carefree stupid days I ever had, and I feel privileged to have shared them with him.

‘And now he’s died for real. Without me. Selfish bastard.’

blagh, that looks disgusting what ever gilly rolled in :/

I am very sad about Rik :( And also Eric Hill (creator of Spot) died, so I am also sad about that. But no-one can be sad for ever with happy dogs around!

My Bottom? That sounds like soemthing at least two of my sons would think up. Then again, they were fans.

Sad about no more Spot. Perhaps you could write a gook about the exploits of the Labs?

Your dogs are adorable! The lemon curd sounds nice. My dad used to make lemon butter and I would eat it out of the jar. Your quilt looks like it is coming along nicely. It has been sunny and not too cold here apart from the mornings, but once 5:30 rolls around the chill sets in. At least we can enjoy the sunshine for a little bit.

I loved the Young Ones too. So sad about Rik Mayall.

I love lemon curd. My mum makes a very good one in the microwave. I must get the recipe from her. We planted a lemon tree last year but so far it's not thriving. Not dying either, just not thriving. Fingers crossed it takes off in spring.

I too am so sad about Rik Mayall I was in shock when I heard and when I told my sister she was too. We watched The Young Ones when they first came on in the 80s and loved them so much, everything stopped for them. We taped them on VHS and watched them over and over. It is such a shock when someone who has been a big part of your life and things you loved in your life is suddenly not in the world anymore. He was so young

Oooh, that Ood cowl is very cool, if a tad creepy...
The weather was a little cooler down here I think. We have had some cold and frosty mornings that iced up my car windows!!
I am very intrigued by your lemon curd recipes, but I worry that making anything so yummy would cause me to indulge a little more than I should...
When the Young Ones were first on tv my brother and I were a little too young, and my mum banned us from watching it (also my brother was very good at inappropriately repeating bottom jokes, of which there were of course so many). I remember watching reruns later on, and being amazed at the collection of characters - the lugubrious Neil, the violent Vyvyan, and the dodgy but slick Mike. Plus Neil's cooking gave me a deep suspicion of lentils... More recently I really enjoyed Rik Mayall's 'Grim Tales' series - he did just the right combination of creepy and funny!

I wonder often what animals get out of rolling. Nissa loves a good roll, usually in dry sand or on warm cement. I call it her sand bath. I also wonder how she doesn't seem to get dirty when rolling, the sand just brushes off and she is a silky again. Not like naughty Gilly, rolling in stinky, dirty things!