Why is is Christmas in July?? Surely it should be Christmas in June, six months after Christmas in December?? I was pondering this today because we celebrated CIJ at Leukaemia Support Group. My mum and her friends had Christmas a little while ago too. I baked Nigella's Sticky Gingerbread Cake and topped it with some fondant snowflakes and snowy icing sugar. I think they looked lovely, and people thought I was magic to make the snowflakes. I told them where to find the cutters, so they too could make magical snowflakes. 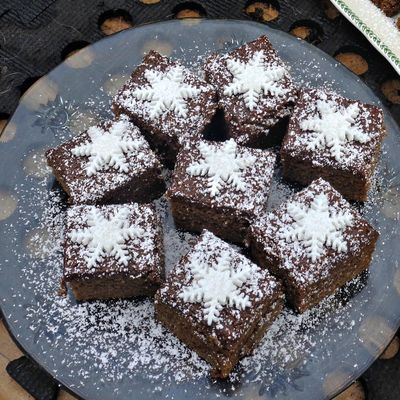 On Friday I was invited to the Family Birthday Outing for MrsDrWho. I struggled on with my poor RSI finger, no purling, and made the 3.5 metres of I-cord I needed for Young Her's Life of Brain hat. 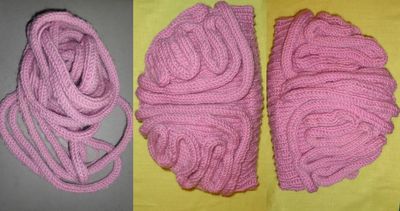 And here it is being modelled in a brainy position. Young Her is very chuffed. 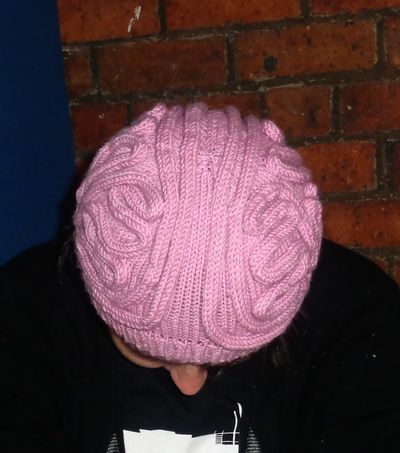 I made a Creeper Waist Bag for Young Him. It was rather successful, unlike the pocket appliqué on the pyjamas. I picked up scrapbookin' puffy paint instead of the appliqué puffy paint. Now I must cut out another sixty-four tiny squares (well almost) and wait another twenty-four hours for it to dry. There is also talk of a Creeper apron....

Obviously the bag is much larger than the pocket.

Miss Lorelai Gilmore found a long dead thing when we were walking at the dam. She decided it needed to be sniffed, and maybe even nibbled. Peri was on her lead ready to walk on the road and so I handed her off to Rafa's Dad while I went to fetch Gilly. Gilly thinks that if she doesn't look at me, she doesn't have to obey commands. She's a rascal. Poor Peri was not very happy at being left with Rafa's Dad. Her worried look changed to one of joy when we came back. 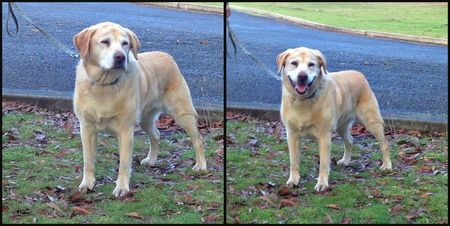 There was a wiggly tail trot past by very happy Labradors. Their tails swish so quickly, the camera (Or perhaps it is me?? That's more likely) can't keep up.

Knitting Dining Out this week was indeed dessert. I had a wondrous Toasted marshmallow coconut meringue with raspberry curd and strawberry gelato. I was very lucky, as almost all the other desserts contained chocolate and/or coffee, and I can't have either. My dessert was too much really, but I broke my Stop When You Think You Have Had Enough Rule and finished every last spoonful. 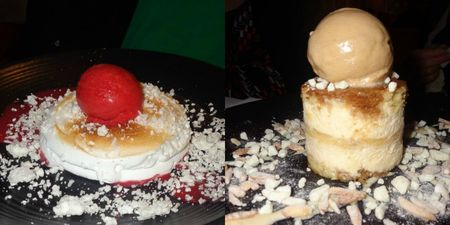 Beneath our radiant Southern Cross
We’ll toil with hearts and hands;
To make this Commonwealth of ours
Renowned of all the lands;
For those who’ve come across the seas
We’ve boundless plains to share;
With courage let us all combine
To Advance Australia Fair.

The verse is clickly and there is a video where you can hear the anthem. Both Lovely Nurse #2 and I commented that it appears we do NOT welcome those who come across the seas. It makes me ashamed to be an Australian: to learn that we have handed refugees back to Sri Lanka after a suspect 'enhanced' questioning, and now there are 153 more being held on a Customs boat. Thank goodness some dedicated and brave people have gone to the High Court, and an injunction has been issued. I simply can't believe that Australians really condone this behaviour by our Government, and the last one. Surely, along with those who came 40,000 years ago, we are all immigrants? Many ancestors arrived as political, religious or financial refugees. In our state we welcomed the peoples of Europe after WWII, and then the Vietnamese and Cambodian boat people, the Hmong and now the Somalis and Sudanese. Surely we can find it in our hearts to do more than hand refugees back to the Navy of the country they are fleeing?? It may not be the easy thing to do, but I believe it is the right thing. It makes me so frustrated and disappointed.

That is my two cents worth for today.

Meanwhile, there is a lot of this going on: 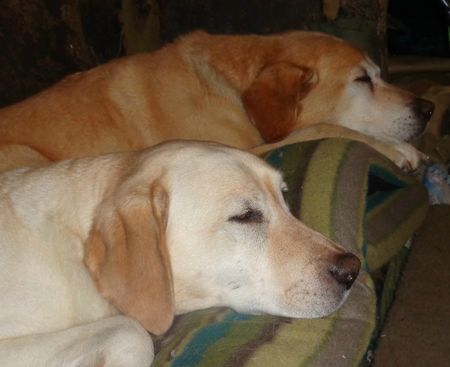 Sleepy warm Labradors, all cuddly and cute. They snuggle up together.  Seems like a good place to be very soon!!!

The ginger bread cake looks delicious! I'm happy to see the girls are doing well all around.
My daughter, who lives in Sydney now, was in Hobart last week, visiting a friend. :o)

those doggies do indeed look lovely and snuggly...sweet dreams ! Totally agree we have plenty of room in this country to accommodate many more people less fortunate than ourselves - we're not so "lucky" to have such a mean-spirited government - shame ! :(

Love the Creepers and the Brain! Very clever of you (and patient - that's a lotta tiny squares and i-cord!)

that brain hat is great!! wish i had of thought to do that as a kid since we made yards and yards cord but never did anything with it lol

peri looks so sad, but then has a huge smile :D

immigration is a problem here as well :/ the government just doesn't know what to really do with people trying to get in the country, legally or illegally. they change their minds about things so many times :/

I have considered the Brain Hat as it is amusing but I'm not sure I could make that much Icord without strangling myself with it.

Lovely waggly labs! We've been away for two weeks and Sirius has been staying with her lab friends Jasmine and Bosco. She had a lovely time but she is SO TIRED that she has done little but sleep since we picked her upon Tuesday!

yes Cindy i am embarrassed as well with australia's stance on refugees. we have friends who are very involved with the plight of refugees. the husband is directly involved in these submissions to the high court in order to gain injunctions. in fact they pay these court costs as well out of their own pockets...not cheap!! they recently got back from a trip to perth & darwin to visit the refugees in these detention centres in order to not only offer moral support, but to assess any urgent legal requirements. their home is also opened to refugees who need somewhere to stay when they are granted community detention status.....& contrary to what is said in the media...depending on the status they are granted, these refugees don't always get handouts from the government!! even when they do get some sort of pension it isn't enough to live on without assistance from charities or people like our friends. i wish the media would open people's eyes to this shame instead of feeding our nation a bunch of propaganda!

as always i enjoy your girl's antics....they put a smile on my face every time!! :D

Your snowflake brownies are indeed magical. The desserts at your Knitting dinner are just fab! Dogs like to ignore us humans when they don't want to do what they are told.

the cake looks so nice I could go some right now, and snuggly puppies are always beautiful. Are you watching The Tour? doing a KAL this year? I am crocheting each night while I watch it but I never get to the end of the stage, I hope to soon

I thought I had commented earlier on this. I am ashamed with lack of decency to those less fortunate than we are here. Also ashamed of the gobbledygook which is used to cover up government actions here.

I think Christmas in July is a tourist construct. It's cold here in many touristy areas in July. Not only is it cold, but many states have school holidays then. So, put the two together and you get lots of holiday makers looking for good warming food. Add a label, and there is Christmas in July!

The desserts look rather scrummy.

I'm thoroughly ashamed of our government.

I made Nigella's gingerbread cake with lemon icing to take to a friends house. Their 5yo (at the time) daughter was so excited to try it - she thought it was chocolate cake! She was quite disappointed. Shame, as it was delicious! Yours looks fabulous. Love the snowflakes.
I agree entirely re the refugees and our government's appalling behaviour. Just appalling,