Tails Of The Unexpected

Well, that was an unexpected absence. I don't know what happened. I do actually. I had a big rest after the school holidays, and then it wasn't The Last Of The Winter Whine and I had a week in bed with the cold/virus (which I still have) and then we had a terrible storm and we had no phone for nine days. Then my mum and aunt came to visit and, lo, a month had gone past and I hadn't noticed.

The storms in our state were terrible, two people were killed by falling trees, and there was so much damage to houses and roads. Before the storm reached it's height Peri and Gilly went for a walk in the very late afternoon: it was just raining too hard in the morning. It was The Most Exciting Walk Ever. They ran about in the dusk and all the smells were better in the dark. They were sooo happy and excited. You can just see their fluffy bottoms in the dark distance on the right. 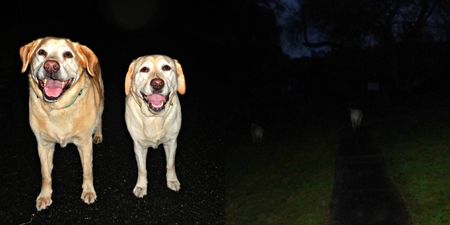 The dam was closed for a week and so we had other interesting walks along different roads. Interestingly the road was to the dam was closed, but people were allowed to walk along the paths beside the road. I decided that if a tree fell on the path we might not be seen, but if it happened on the road we would be found sooner. You know, just in case.....

So that's where we walked. I did check with Sandy's Dad and he walked there too. Peri and Gilly's tails worked overtime: there was so much wagging and so much sniffing. 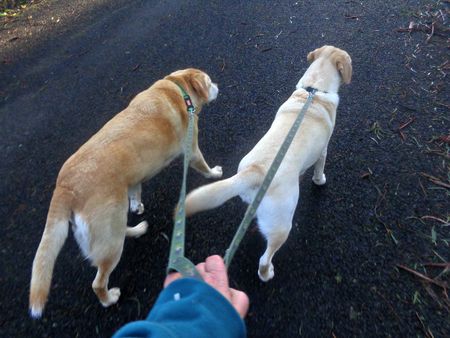 I have been making more shopping bags: for my mum and aunt, for MrsDrWho (the Supernatural one) and for The Dutches and The GardyGardeners. 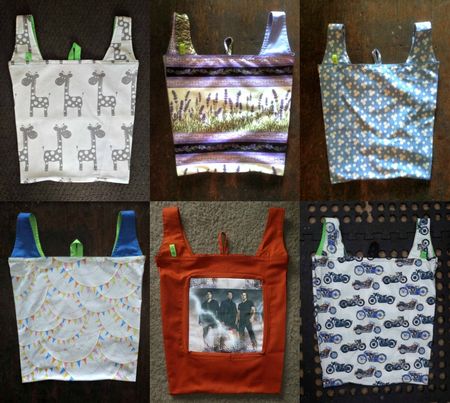 Tinking Bell visited for a day and we had such a lovely time. I don't have a picture of the lovely Wollemeise wool she gave me, but I shall take one. I made her a Totoro shopping bag. The Totoro is from an anime film. We had lunch and then browsed at the posh fabric shop. We drank copious amount of tea and talked twenty to the dozen!! It is always lovely to catch up with her. 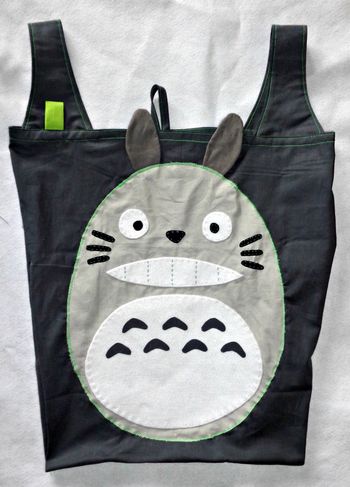 I also knitted a Birthday Hat for Mr Reno. I knit one every year. It is Woolly Wormhead's Chunkeanie. I haven't made a Ravelry project page yet. I used some Rowan Aran Tweed, almost 100g, on 5mm needles. You can wear it with the brim up, or down. I hate purling, so I knitted it inside out until the very cute decreases. MrsDrWho doesn't know yet, but I have finally finished her House Warming Drinks Party Gift: a cat table runner. I saw a picture of a block and so was inspired to draw up my own pattern, which was a little different. I embroidered/quilted Meow and Purr, a ball of wool and a fish. I hope she likes it: she likes tessellations and cats so I might be on a winner.

I had a lovely time when my mum and aunt came to visit. We ate delicious lunches, visited the trendy garden centre, went to the market on Saturday and found a new and better contract for mum's Ipad. Yay!! Peri and Miss Lorelai Gilmore were a little neglected and for the first time for ages we missed out on a walk. I was just very tired. I don't think they minded. Mum gave them some special treats. I think, really, they were very excited. It's an Ipad picture and so it's a bit grainy. I love Gilly's inside out ear. 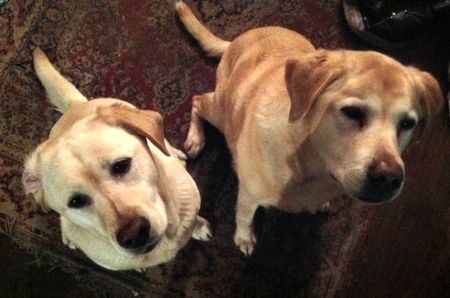 We have been sitting on the couch and knitting and lying in bed and reading. I have a long list of books to add to my side bar and four big new books came on Saturday. I bought a new book too.

MrsDrWho and I are off to the cinema to see Doctor Who on Sunday 24th. I have the tickets in a safe place, I've told other people where they are so I don't forget!! I am very much looking forward to seeing Peter Capaldi as The Doctor.

And now we are off to bed. We had a long nap this afternoon, and plan to have a long sleep tomorrow as well. I do have a cake ready for Friday Food, and now I've bitten the bullet and posted to my blog I plan to be here more often too: assuming no more storms and phone anomalies.

Sorry to hear of the lingering cold, but happy you have been looked after and enjoyed family and your creativity is ever at hand.

Peri and Gilly are just as adorable as ever.

thanks for sharing,
Linda

Not sure if they are showing the Dr.Who ep in Dundee, probably but I will pass, would rather sit on a comfy couch and watch it :)

Glad to see you back!

The totoro bag is fabulous ad are the runner and hat

Hope that you are feeling much better. The storm sounds as thought it was awful, glad you are safe though. I love the Totoro bag, how cute!

so glad you are back Cindy I was quite worried thinking you must be most unwell!! It sounds like you have been quite busy. The storms were horrible weren't they. I love love love your shopping bags and the Totoro is to die for. We love all Ghibli films in this house but Totoro is our most favourite. You have done an incredible job. I have only made him as a cake. I am so happy to see you back xx

Hi girls, sorry to hear you haven't been wellCindy. Have been busy looking after our dear grandaughter 2 days a week and work too so the weeks seem to fly past. Jet and George are getting along well. Take care and get better soon, it has been lovely with the sunny weather lately. Jane

It seems to be the order of things at the moment! I'm the same :)
glad to see you back on deck xx

Sorry to hear about your cold - I hope you are feeling hugely more chipper now.

I love your table runner - how brilliant it is!!!

Well I am glad you are back! Between the weather and the various viruses going around it really has been a wild month, hasn't it? I am crossing my fingers that we are almost to the end of the illnesses in our house - I will be shooing everyone out into the sunshine and airing out all the bedrooms this weekend, in the hopes of dispelling any lingering nasties!

And I'm glad you mentioned going to the movies to see Doctor Who - I wonder if I can talk hubby into going with me?

I love Totoro, and your bags are all great!

Welcome back! That is some crazy weather you had. Glad you had a nice family visit. The shopping bags are so cute and practical too. And I Love the kitty tessellation runner!

Very happy to see you back! I am also looking forward to seeing Peter Capaldi as the Doctor. I will wait until it's on the telly. How exciting going to the cinema :-)

I had a bit of a blog break too, for no particular reason. I hoped you were ok and just busy.
Love those bags - the bunting fabric is very cool. And the ct runner is awesome, I didn't realise there were upside down cats too - very clever!