There's No 'I' In Team (Australia)

Really?? That's the bring-us-all-together cry of the PM?? Operation Everything, where anything becomes a military campaign. If it is the old "if you're not with me, you're against me" then I am against you. Who knew?? I can be VERY contrary. Maybe it is the centenary of WWI that has brought all this military posturing out into the civilian arena. I don't think it sits well.

And so, onto what the PM would call Operation Quilt. Luckily it's not an on water operation so I can discuss it with you. There has been an awful lot of block making going on. When MrsReno laid out the blocks we had made this year I realised I should have sixteen: I always make two of each block. 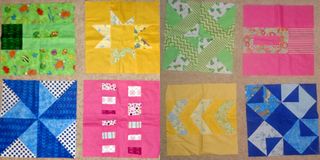 Oh dear. I didn't have sixteen at all. Yesterday I sewed quite a few blocks and made next week's blocks as well. I am missing four blocks, they are in a random bag somewhere. There are only three more blocks to sew, I'll make doubles and that's twenty-four and enough for a quilt. And I will have used up both my fat quarter sets as well. 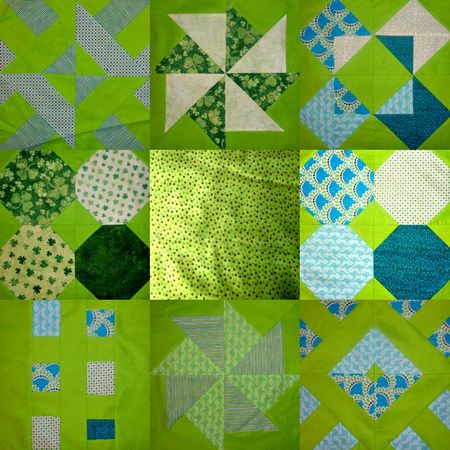 My friends have finished some more blocks too. My favourite recently has been The Exploding Pineapple, of course: that's the pink once in the middle of the second row below. I haven't ironed or trimmed mine yet. 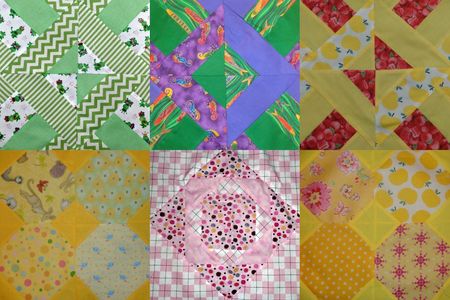 I kinneared Colleen Hewett, very unsuccessfully, at the supermarket the other say. I would be no good as a spy. As I was trying to take the unobtrusive photo, she said to the person on the other end of the phone: "A lady is just taking a photo of me". That's no lady, that was me!! Colleen was here to make a special appearance at a local College's production of Godspell. I do remember Colleen from my teenage years, and I reckon I could sing along to all her songs!! She's pretty fabulous and I told her so. 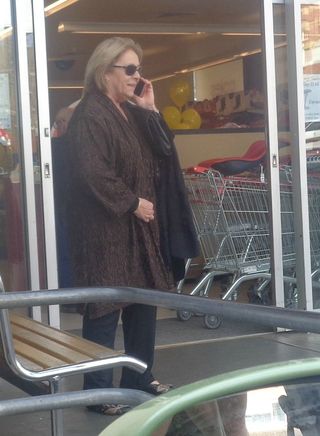 The BlackSpot of Doomlight(tm) had Vogue patterns on sale for $5 or $4-50 with their card. I bought two patterns, very restrained I know. I love the simple dress with the v-neck and flared skirt. View B takes less than 3 metres and I like the Princess Line construction, I find it easier to make a FBA. I have had my eye on the Vintage Vogue coat in the second pattern for a while. I don't actually need a warm coat, but it would be nice of an evening when I am coming home to have just an extra layer in the Winter. I think this will fit the bill perfectly. 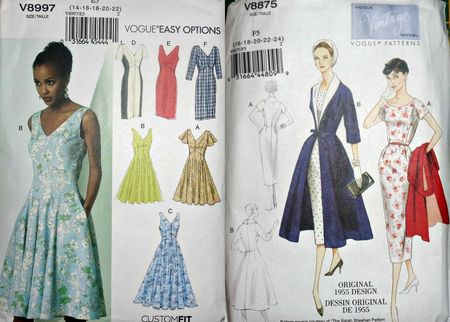 And on the same topic, a new sewing machine will be arriving at our house soon. My Brother is just not solid enough and won't sew over more than two layers of material now. The GardyGardeners told me there was a sale on in town at the sewing machine shop and so I went in. I have some birthday money, and my tax return and a little put aside and so I can afford a nice sturdy and exciting machine; Janome DC 6030!!! 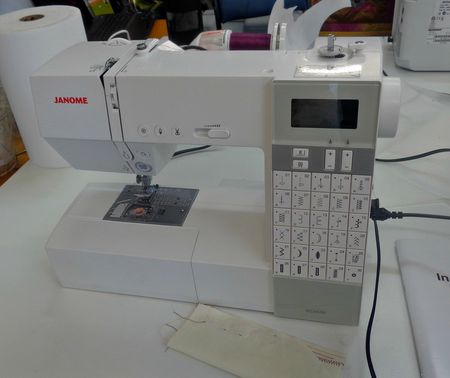 I am most excited about the Scissor Button. After you have ended off with the Knot Tying Button, the Scissor Button cuts off the threads close to your sewing and leaves long ends. Yay!! There is also a small 'table' which can be attached to the sewing machine. It sews very nicely and doesn't have a bazillion decorative stitches, which I never use anyway. Of course there wasn't a machine in the shop, so I am waiting for a phone call any minute now. 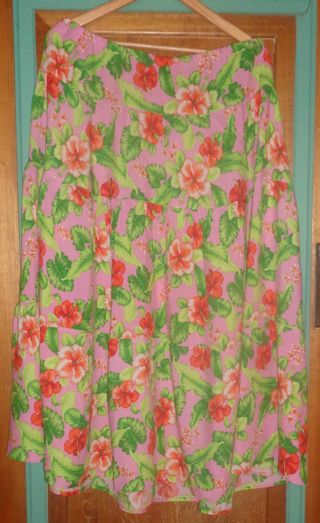 I used my current machine to sew a very, very belated Christmas skirt for MrsHouseOf. It is a very swirly peasant style skirt. I used this pattern as my guide, but I did make the layers longer as MrsHouseOf is nicely tall. It is a Two Hour skirt and that is not far off the mark. 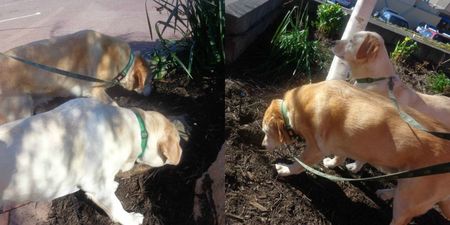 And now to more important things: Peri and Gilly went to The Vet to see Dr Marion last week. They were both vaccinated and examined and pronounced thin and very healthy. Peri has a little arthritis in the leg that was operated on for cancer last year, but she's on the way to 13 and so it is to be expected. The cancer hasn't come back, so we are very grateful and pleased. Gilly was tied to the table and in her excitement she dragged it across the room!! Gilly is very well, and just has one waxy ear. Peri is allowed to be off the lead and wander about the consulting room. She likes to stand right next to The Vets and lean on them as they examine Gilly, and she looks in the rubbish bin.

The weather has been very warm, I had to turn the air-conditioner on in the car. It was 17*C the other day. The BOM said Winter has been up to two degrees warmer than average. Peri and Gilly enjoy the frosty mornings and sunny days. 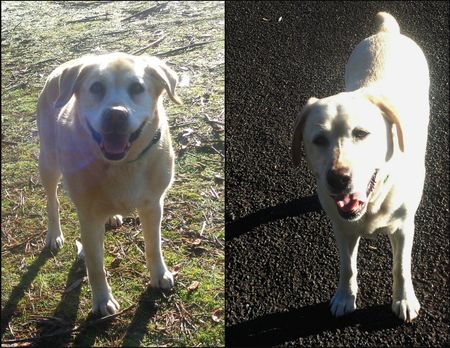 Peri Naughty and Miss Lorelai Gilmore are very well behaved. There was a little argument between the boy dogs on our walk, and The Girls were quite confused. There is never any growling or fighting at our house, The Labradors always get on very well together. Sandy decided that he would grab hold of Rafa's lead and drag him along. Rafa was not happy and there was some growling and rolling of eyes. They are friends now, but Rafa stays well away from Sandy when he has his lead on. Peri and Gilly couldn't give two hoots when he does it to them. Peri gives him her Paddington Hard Stare and he soon stops.

This month's Better Homes and Gardens magazine from Woolworths, or Roelf Vos as I still call it, comes with a 'free' bar tin. It is a long rectangular bar tin. I have an old one like it and when I tried to buy a new one last year it was going to cost about $30, so I went back and bought another magazine. $7-20 is so cheap. There is a very good recipe booklet and I shall be cooking lots of cakes and slices in bar tins. MrsDrWho has just suggested I should buy a third, just in case... 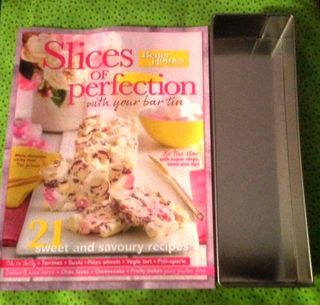 MrsDrWho, MrsHouseOf, a Young HouseOf and I went to see Doctor Who Deep Breath at the cinema. It was pretty great, there was a special extra beginning and a making of at the end. I heard a hipster looking man outside pooh-poohing people paying $25 to go and see it, but I think it is four cups of trendy coffee and anyway, I just like Doctor Who. There is something special about watching it when you are with a like minded audience. I am looking forward to more Who next week. Peter Capaldi will be an excellent Doctor, and a Scottish one at that!!!

I really like those greens and blues together for those blocks :)

haven't watched the new Dr Who yet, the tv isn't hooked up since we had to move it so John's dad could paint. Capaldi seems like the type of person who might have told the BBC people to piss off, I'm not changing my accent :p

Oh I saw that BHG magazine the other day but I dont really bake things so I left it there. Glad to hear the dogs are doing well with their health. I had to have a giggle when you said you put the air conditioning on as I did the same thing this week and we have 21 degrees for the rest of the week which is just perfect weather. I hope you enjoy the sunshine and find your other beautiful quilt squares too.

Your quilt squares look gorgeous. I like your dress pattern - lovely. Glad to hear Peri and Gilly are well. Thanks for the magazine tip!

you won't know yourself with the new whizz-bang machine, I'm sure! Money well spent :)

Welcome back! I missed commenting on your first post back so firstly I want to say how clever is your cat block, so it is a cat two ways!

Congratulations on the new sewing machine, hopefully it has arrived by now. That will be lots of fun, I'm anticipating lots of sewing posts coming up!

I love those vintage Vogue patterns. I can't wait to see your coat when you've sewed it. :) Glad to hear the pups are well and hope you are all fit now.

I ADORE that Vogue coat. Please do make it!

I will have to seek out two copies of the BHG magazine, I think. I hope it's still available! I bought two (very expensive) bar tins a couple of years ago, and I think I loaned them to someone and they weren't returned...

oh how lovely getting a new machine!!! Mine is not very sturdy either. About 6 years I traded in my old one I bought in 1983. There was nothing wrong with it but hubby thought it would be nice to trade it in and get a new machine for my birthday and I thought so too. To this day I regret doing that as the old one was so heavy and sturdy in comparison and well I just should of kept it. I never would of recognised Colleen!! fancy you seeing her at the Supermarket!!