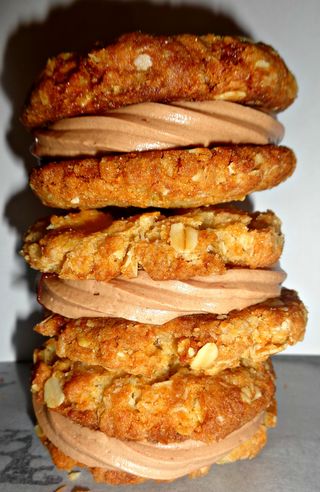 I'm not sure about the rest of The World, but here in Australia we have a biscuit called Kingston. As it happens, there is a city in the south of the State called Kingston. And if you are going to devise a recipe for your own Kingston biscuit, then what better name than Margate, the next town along from Kingston!!!

That's what Alistair Wise did in his new book, named after his shop: Sweet Envy. Most every Sunday he is on our local ABC Radio with an interesting and challenging recipe, which listeners are encouraged to make. His mum, Sally Wise, is a fabulous cook too and I own many of her books. I borrowed Sweet Envy from The Library.

This is a version of an ANZAC biscuit, made extra special with a filling of chocolate frosting and ganache. I made some as per the recipe and then some single biscuits with ganache drizzle on top. The general consensus was that they were delicious!! I was very pleased. They are yummy just as a plain biscuit too.

Alistair says you can keep the filled biscuits, in an airtight container, in a cool dark place for up to a week. I would only do that with the plain biscuits. Once they are filled I think they need to be kept in the fridge, especially in Summer, or fill them and eat them straight away. You could also just layer the two fillings, which would be quicker and easier.

The biscuits are large, next time I make them I will make them half as big. I really like that you can make these from your pantry. You don't need any fancy ingredients or a lot of time. Two hints to help you- make sure you flatten the biscuits before you bake them and really, really let them cool on the trays. I let mine cool for 10 minutes, otherwise they are too soft and break when you lift them up.

Preheat oven to 180*C and grease then line two trays with baking paper. 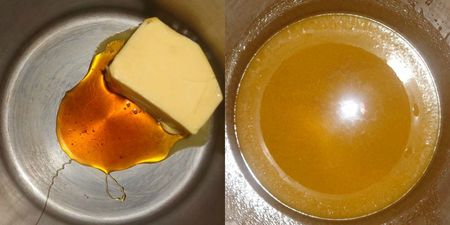 Put a saucepan over a low heat and gently melt the butter and golden syrup/honey.

Once it is all melted, add the caster sugar, coconut and rolled oats. Mix well. Dissolve the bicarb in the boiling water and add to the mixture. 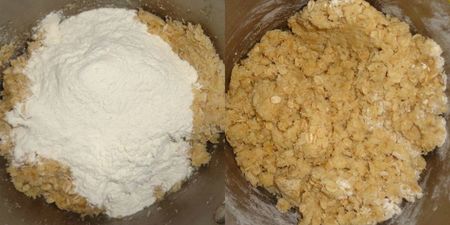 Finally add the flour and salt, and stir till everything is perfectly combined. Because I am a little obsessed with numbers, I weighed my mixture, 840g, and divided it by 24 which gave me 35g for each biscuit. I then proceeded to make each ball of the mixture and weighed it. You don't have to do that, they were round about a heaped tablespoon full. You have to squash the mixture quite a lot before it will make a ball, so be patient. It's also quite messy!!! 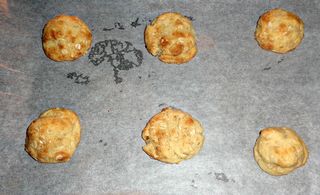 I put 6 biscuits on each tray as I was not sure how much they would spread: not too much, You could put 8. Remember to squash them with your fingers before they go into the oven, mine held their spherical shape far too well. When I turned the tray halfway through, I just squashed them flat and they were fine. 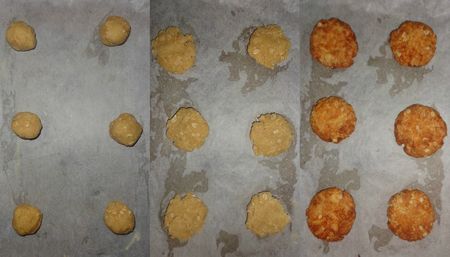 Bake for 10-15 minutes, mine took 12 and I swapped shelves and rotated the trays halfway through. The biscuits should be beautifully golden brown when they are ready. Cool on the tray for at least 10 minutes. I used the cooling time to make the next biscuit balls.

Make the chocolate ganache by heating the cream to boiling point and then pouring it over the chocolate. Stir till the ganache is smooth and set aside. 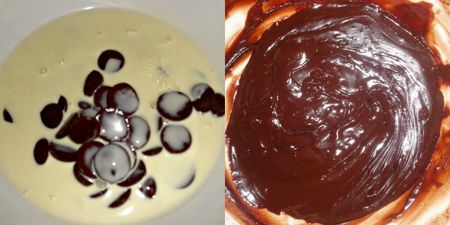 If you would like to make the frosting, beat the butter and icing sugar in a mixer for at least 10 minutes until it is pale and light. Slowly pour in the milk and vanilla extract, and then add half of the chocolate ganache. Make sure it is all combined well, and there are no pale streaks. I gave it a good mix with a spoon.

To assemble the Margate biscuits, first match similarly sized biscuits. Place them in pairs, wrong sides up, and pipe or spread the chocolate frosting onto one. If you pipe, swirl it around the outside and then dollop a good spoonful of ganache into the centre. Top with the matching biscuits and very, very gently press down lightly so they gel together. You don't want to squash the filling out the sides!! And there you are. 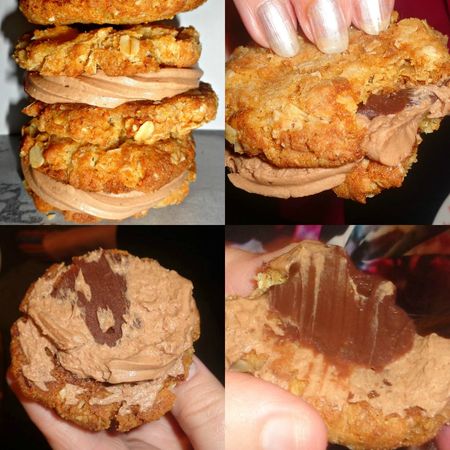 Margate biscuits for everyone to enjoy and eat any which way you please. 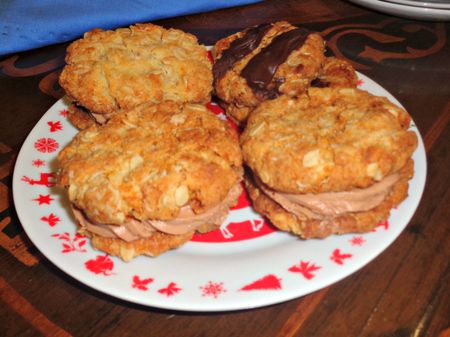 Oh I used to love kingston biscuits when I worked in an office in the city as we used to have to order biscuits for morning tea. Yours look and sound absolutely delicious.

oh my!!!! this looks naughty

wow, those look AMAZING and possibly ENORMOUS but IRRESISTABLE