Home Archives Profile Subscribe
Our Neck-lace Of The Woods
No, No Internet That's All I Hear. 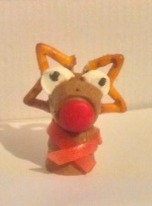 And yes, it's Friday Food on Saturday again. I meant to make these cute little reindeer last year, but didn't quite get around to it. I couldn't buy the little chocolate cups this year and so I used Cadbury Dairy Milk Rolls, rather like plain Rolos. And instead of two, I used four for each reindeer, so you can make 4 from a packet.

The weather was warmish, so I found the best way to 'set' them was to put them in the fridge for 10 minutes after each stage.

I was able to buy all the bits and bobs at the supermarket and I had some black gel food dye left from The Minecraft biscuits, so I used that for the eyes.

You need to keep the melted chocolate runny, so I put my little china bowl in another larger bowl with some boiling water, and topped it up as the water cooled. You have to be careful not to get water in the chocolate, or it will be a bit of a disaster and the chocolate could seize.

As Christmas is approaching I was able to buy some mini pretzels that had a star shape and I cut off three of the points to make one antler. I am pretty sure I could have used any antlery shape if there were no stars.

Christmas is closer than it seems, so I am going to try a few new Christmas cooking ideas on my blog for the rest of the year. Happy Reindeering!!! Oh and these are from last year's December Super Food Ideas magazine.

Mini Rudolphs       generally this is what you will need

Gather your equipment and ingredients. Melt the milk chocolate and cut the marshmallows. I cut mine into thirds and then each third in half, ie 6 pieces. I used a toothpick to do all the chocolate gluing. 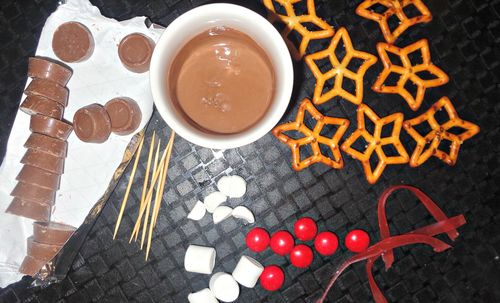 For each reindeer, using the melted milk chocolate throughout, glue two pairs of the tiny chocolates together: one pair for the neck and the other for the head. Wait for them to bond, and then glue a red nose to half the pairs. I put them in the fridge for 10 or so minutes at each stage.

Next, glue the heads on to the necks and leave them till they are strong and set. Cut the mini pretzel stars as you wish, and glue two to the back of each reindeer. I rested them on some crumpled foil as they wouldn't balance on their noses. Leave them to set and then add the eyes.

Finally, paint on the eyeballs with a tube of writing icing, or mix up some icing sugar and food dye of your own. I blobbed the black on with a toothpick. Wrap a thin strip of sour strap or fruit leather around the reindeer's neck and Bob's your uncle!!!

And there you are, Mini Rudolphs, suitably Christmassy and all ready to eat. Oh, I feel a bit sad for them now....... Poor Wonky Reindeer. 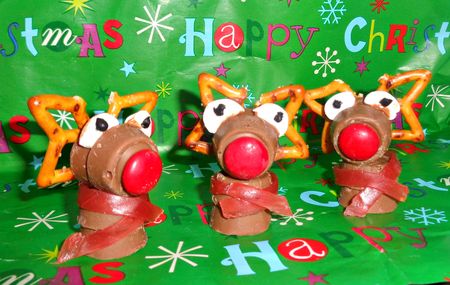