Home Archives Profile Subscribe
He Wears 'Core' Blimey Trousers And He Lives In A Council Flat
She Loves You Yeah, Year, Year!! 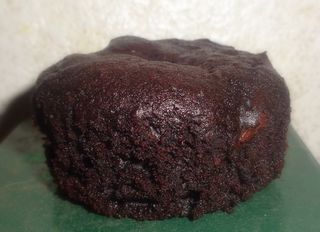 This year I have learned quite a lot about cooking for vegetarian and gluten and dairy free friends. I think I am improving. I had planned on making Vegan Black Bean Brownies yesterday for Toddler Zoe's mum, but the day was just too full of things happening, and I baked them today instead.

They are fabulously easy. I found the tin of black beans at the local organic and natural food shop, along with dairy free vegan choc chips and baking powder. I used an egg, rather than an egg substitute and Australian olive oil, as that's the only oil I had anyway. These are Just So Easy: blend, stir and bake. The original recipe suggests baking in the actual muffin tin, but I don't trust the tins and so I used paper cases and let them sit in the tin after they came out of the oven for a good 30 minutes, They came out of the paper cases very easily and look fabulous. I can't eat them as they have chocolate in them. But I can tell you they smell marvellous!!!

Oh, I don't have any coffee. I can't drink it and so I don't buy it. I doubled the vanilla because I had to leave it out.

I made 8 brownies, and each was a heaped tablespoon (the one that I use for stirring things) so probably 20ml or more. You could also use the black beans as the base and whatever ordinary ingredients you have on hand. These are for MrsDrWho's niece, so I am making sure they tick all her vegetarian boxes and I can use an egg. Also sprinkles?? I think not.

Preheat the oven to 180*C and line a muffin tin with about 8 paper cases. 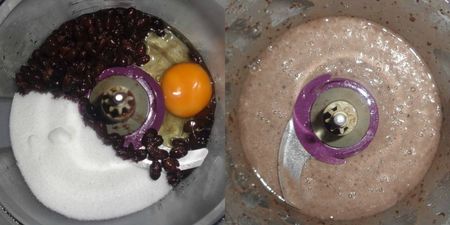 Put the beans, egg, sugar and oil in your food processor. Pulse, or whatever you do, until it is smooth. I could still see black bean pieces, but I thought it was blended it enough. They were very small, about 1mm.

Put the remaining ingredients: cocoa, salt, baking powder, vanilla extract and choc chips into a bowl and stir to combine. Mix in the wet batter and fold through until everything comes together.

Fill the paper cases with a heaped tablespoon of the brownie mix and bake for exactly 17 minutes. I did exactly that, turning the tray half way through. Then cool in the tin once they are out of the oven, for 30 minutes. The paper case peeled off perfectly and they look scrumptious.

I am not sure how long they will keep, maybe a week in the fridge? I don't expect they will need to do very much keeping though. 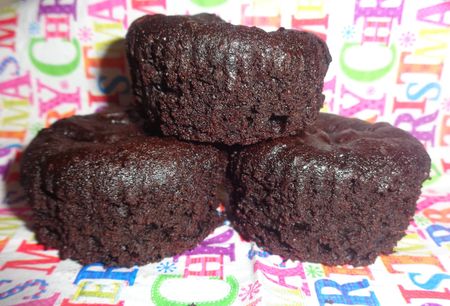 Next Friday is the last Friday Food for 2014. Where has they year gone?? Happy Christmas baking!!!

These sound really interesting - I have never seen black beans used this way before, and if they smell good, it's likely they taste good.

Over the years I have learnt that vegan baking can taste just good as regular baking. They look fabulous.

yes where has this year gone,Im trying in vain to clean a bit,get washing through,on forced leave which make it worse,lol my brains still at work