Home Archives Profile Subscribe
She Loves You Yeah, Year, Year!!
I See Treats Of Cream, Red Roses Too. I See Them Bloom For Me And For You. 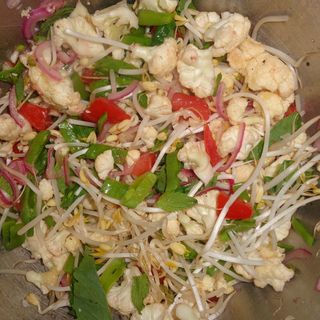 In deference to tomorrow's 32*C forecast, I decided to make something that didn't require any heat whatsoever. The weather has been so wonderful for us, in the low 20s or even teens. All December.

So, this salad is from the weird recipes in the Super Food Ideas magazine for January/February 2015. The other recipes have, eg., fresh raspberries, avocado and lentils, or maybe fresh blueberries, pearl barley and watercress.

Cauliflowers are very cheap at the moment, I paid 75 cents for this one. And I had almost everything else to hand. I couldn't buy mung beans so I used bean sprouts and I bought too few snow peas. They add sweetness to the salad, but I like things on the savoury side anyway. I already had fresh mint so I substituted that for the basil.

I trimmed the flesh from the outside of two tomatoes and discarded the seeds and pulp. I have been doing that more often lately, especially when I don't want the added moisture in my recipe.

The salad needs to marinate for an hour. Just enough time to watch the news and have a cup of tea!!!

Whisk the lemon juice and olive oil together in a large bowl. 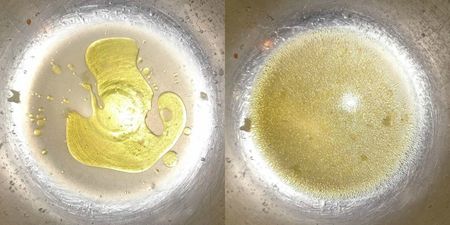 and sliced red onion. Season with salt and pepper. Mix well, cover and leave to marinate for an hour. 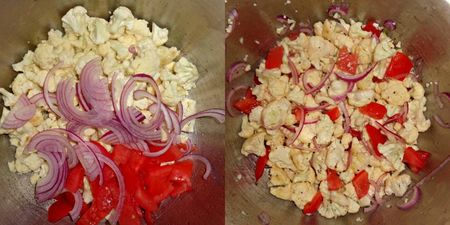 When the hour is almost up, slice the snow peas, pick the basil leaves and mix with the sprouts. The red onion is well and truly pickled, or dressed. I love that it is pink all the way through and wriggly!!! Combine the two parts of the salad and serve. 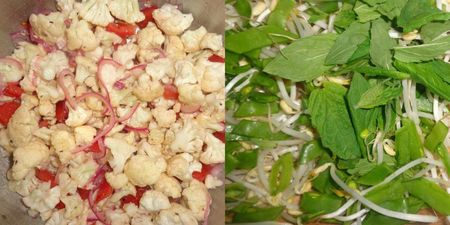 I really enjoyed the unusual flavours, which did actually go together very well. I think this would be good with fish, or maybe pork??? And as a plus, no need to turn on any hot appliances. That's pretty marvellous. 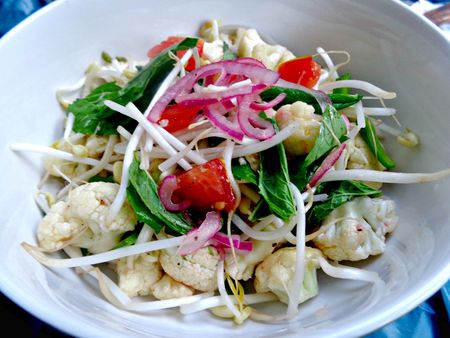 Too hot for anything in Melbourne today. Which means that, fortunately having aircon, I made pasta carbonara because egg and bacon always works. Yours sounds healithier! Hope you and puppies kept coolish today. I worship coolness :)

It does sound lovely and you're right - a the bonus of not having an oven on in this heat! We're facing our second 38 degrees today :(

(Super Food Ideas do have some weird recipes, don't they?! Glad it's not just me who thinks so!)

I'm going to try this salad as it looks yummy!!

A perfect meal for a hot day!