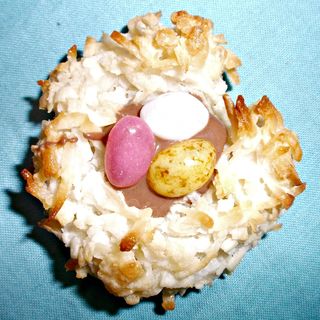 Yes. Well. There was going to be a different kind of nest, but even though I followed the instructions ever so carefully, the jolly nests stuck to the tin. I should have trusted my instincts and lined with baking paper. Not to be deterred, I forged ahead and started again.

Luckily I bought two packets of sweetened flaked coconut, so I sought a better baking plan. I have never used the sweetened coconut before, but I found a recipe. My packet was a little light in weight, so I used less condensed milk. These are the old fashioned macaroons made from coconut or almond meal and egg whites, and not the French macaron which is very trendy and features on all the baking shows. Actually these are child friendly macaroons because there is no need to whisk egg whites to any kind of peak and condensed milk hides a multitude of sins. 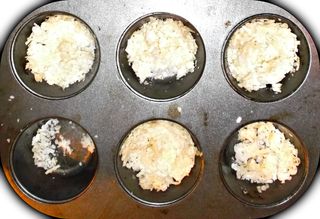 I decided not to use chocolate eggs in my nests, instead I found some very cute tiny jelly beans. Some are speckled so they look quite eggy. You could use chocolate hazelnut spread, oh Nutella, to fill the nests. I used a little melted chocolate.

These will keep, unfilled, for at least a week in an airtight container. I made 12 large nests,  but the mixture lends itself to 18 smaller ones too.

Preheat the oven to 165*C and line a tray with baking paper. 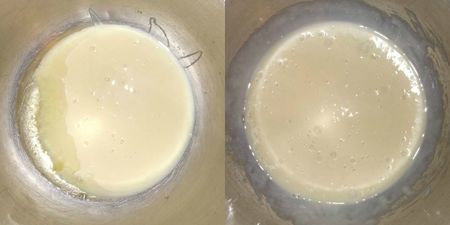 Put the egg white, salt and condensed milk into a large bowl and whisk a little with a fork to combine. 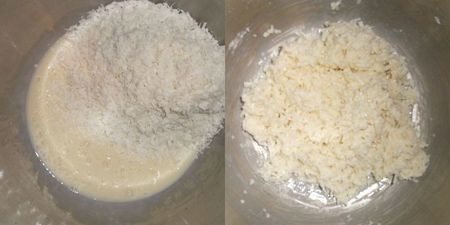 Pour in the coconut and mix, making sure it is thoroughly coated with the wet ingredients.

I used a heaped tablespoon as my measure and wet hands to roll into balls. I made 12. Flatten each macaroon slightly and then press a finger/thumb, or the end of the handle of a wooden spoon, into the centre of each one.

Bake for 15-20 minutes. I baked mine for 20 minutes and swapped the tray around half way through.

Cool on the tray for 5 minutes and then press down the centre of the macaroon again to make the nest more defined. The macaroons rise during baking and so the hole for the nest gets smaller. 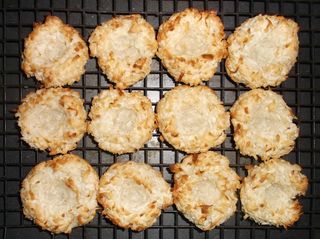 Cool completely on a rack. Now you can put the macaroon nests into an airtight container for at least a week. Or you can fill them right away. I drizzled a little melted milk chocolate into the macaroon nests and then gently arranged a few jelly beans to represent eggs. I think 3 is a good number. If I had some Fairy Floss I would use that instead of chocolate. What Fun!!! 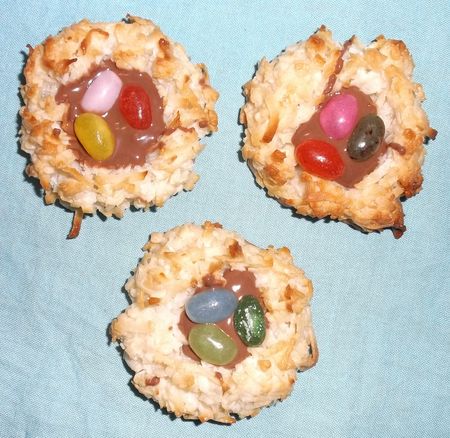