I have made a slide show. Click the right arrow to start, but I have no idea how to stop!!!

Gilly and Peri, mainly Gilly, are digging a hole. It is a long term project and they are jointly managing it. It started off as a bit of a dip and they put a lot of effort and energy into making it large enough for a Labrador to hide in. The dirt goes out the back and then, often, through the fence. Luckily my NextDoor Neighbours are collecting the nice dirt and using it in their garden. There is a new batch of pine bark to try and alleviate the dirt + water = mud problem that has arisen lately. Peri likes to lie on it. The pine bark must have nice insulating properties.

I have worked out why my dresses have worn out in a rather unusual place: under the bust on the left rib cage, which is a place that experiences very little action let me tell you. My Pear dress has been repaired, and then I noticed my favourite green dress with a circle skirt is developing wear in the same place. Then the other day as I sat in the car and pulled over the seat belt it dawned on me: seat belt wear. Enter the Seatbelt Cover 1.0.

It is made from RowanSpun Tweed, 10ply and various buttons. I used the Seat Belt Snuggles pattern from the old MagKnits. I spurned the bobbles as buttons idea and made sixteen button holes, and sewed on a variety of buttons. Sadly, it is not quite right. It is too wide and the buttons too small for the holes. But the general idea is good and I will ponder upon it.

Our Sewing/Quilting group has started again. We have sewn one block already, but I can't find mine. This week we sewed The Holiday Ribbon block. It was quite easy, and the others were surprised at how well it went together. I am sure they just have better sewing skills now.

And it wouldn't be a post without a tote bag. I sewed this one for my sister. She has a SharPeri and I have to find some appropriate material, but I made do with a variety of dogs. 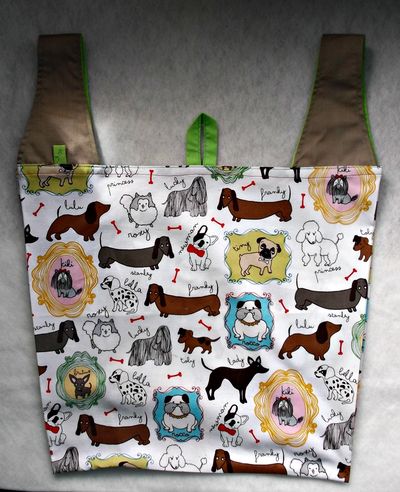 Malcolm Fraser died this week. I am all about Maintaining The Rage. I think The Dismissal was a misuse of the Governor-General's power and undemocratic. I wasn't sad when Fraser cried when he lost the election in 1983. But now I am ambivalent. He came to stand for things that I believe in too. Can a leopard change its spots?? I don't know, but I think Fraser was more of a statesman after he left office. Or maybe I have mellowed over time. Still, I do Maintain The Rage.

I like to think that's three: Malcolm Fraser, Terry Pratchett and Leonard Nimoy. No more dying for a while please PTB.

Peri and Gilly had THREE walks today: one by themselves, a shorter one with Sandy who was walking down to the gate at the dam as we left, and then an even shorter walk with Rafa who came as Sandy left. We were all very tired and had a very long sleep till the afternoon. I am trying to stay awake so I can sleep tonight, but The Labradors never need to budget their sleep time. They could sleep for Britain!!! Gilly is lying on the couch, gently snoring. Well maybe not so gently!!! 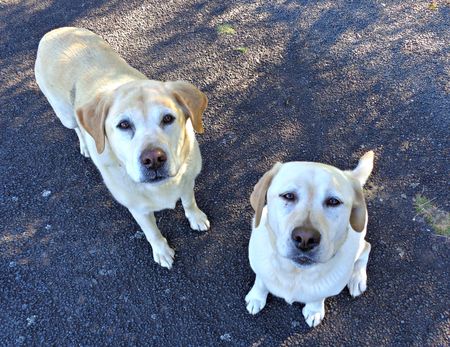 So is that Gilly in the photos? She looks like she is contemplating tunnelling under the nearby greenery... ;)
Lovely quilt squares, and I understand your wear-and-tear issues - I get pilling on my cardis from where my shoulder bag handlesrub under one arm.

love the doggy fabric for the bag :D

"under the bust on the left rib cage, which is a place that experiences very little action let me tell you."
lol, made me laugh sorry :) I've seen covers like that made out of fake fur to try to stop the belt from rubbing and digging in

How is your finger healing? I hope it is all better now with no nasty red lines. I remember a friend at school had an ingrown toenail at camp and it got a red line and she got raced off home. I was jealous because I wanted to go home.
The hole looks very comfy. Nissa likes to dig little dips for sitting in as well, particularly in Summer. It must be a bit cooler that way.