Home Archives Profile Subscribe
May The Seventh, No, The Eighth Be With You
Friday Food: Little Orange Tea Cakes

99 Hot Water Bottles Of Beer On The Wall

I solved part of my blogging problem: I usually don't allow myself to blog until I have read and commented on the posts of blogs on The Bloglovin'. Reader, I decided I would just comment on the most recent post and be damned. Well, the World didn't end, and what a stupid rule that was I made for myself!!

The Dutches were away on holiday and while they were away I finished their Very Late Christmas present: Santa's Laundry Live 2. I seem to have misplaced the mittens. Oh well, Santa will just have cold hands until I find them!!! 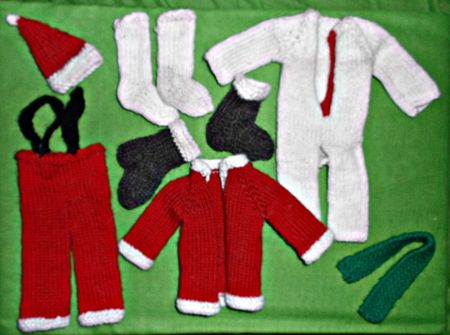 I've also had to start knitting an emergency hot water bottle cover.  The one I have was knitted three years ago in mystery wool. It has not been very long lasting wool, and what started out as a little hole I darned last week turned into a mesh of holes held together with a few strands of wool. So the Lost Your Bottle? hot water bottle was begun last night. I am using a ball of Jo Sharp (and I keep saying Donna Hay) and some old Bendigo Classic 8 ply in Sequoia. 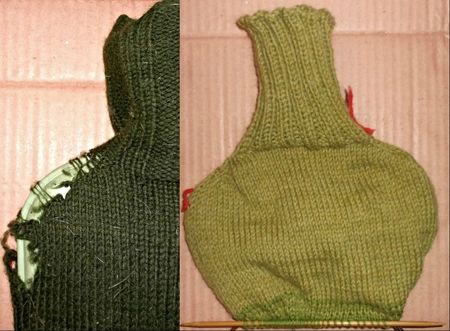 Peri and Gilly have been out of sorts because of the three levels of scaffolding on the house next door. The painters were fine until they went up ladders, whereupon Lorelai Gilmore was sure they were burglars and woofed until reassured. Peri does take it more in her stride , but is happy she can have a biscuit treat at the fence again. Gilly is always unsettled without Peri and when we go up the hill to the hang-glider and Peri doesn't come, Gilly is so joyful when she sees her coming. 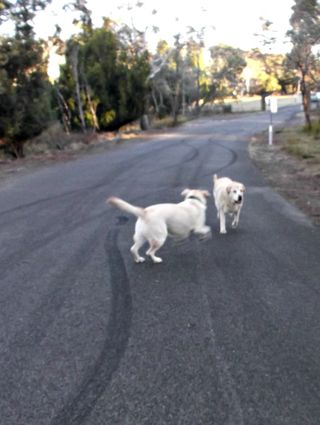 Peri does come when she is called, usually, but often she is busy sniffing a vital smell. 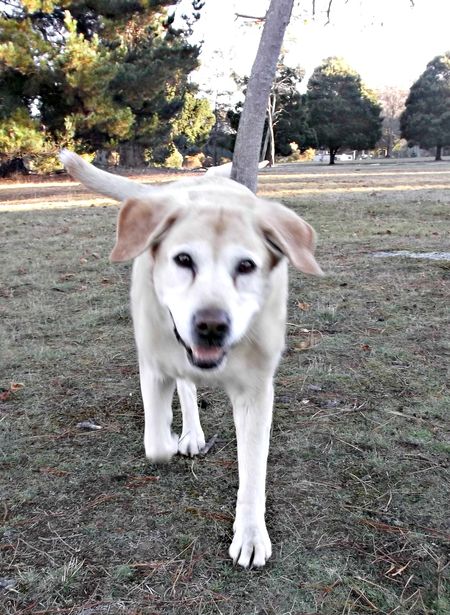 I bought some new cushions for The Labradors. Can you tell that Gilly loves hers so much?? She is sound asleep, sleeping hard, and slightly snoring. 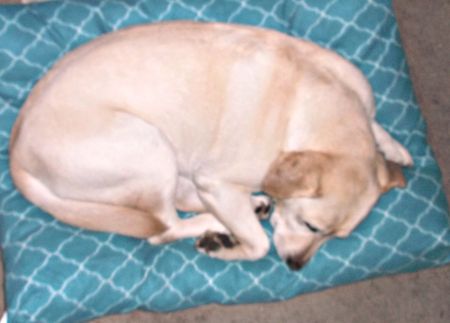 A while ago TinkingBell gave me a little Jamie Oliver greenhouse. A few weeks ago The GardyGardeners were treated to egg and watercress sandwiches for morning tea. Watercress I had grown. Yay!!! And very tasty the sandwiches were too. At first I wrote " and very tasty they were too", then realised it sounded as if I has eaten The GardyGardeners. I think this is the first time I have ever seen a crop through to fruition: Thanks!! 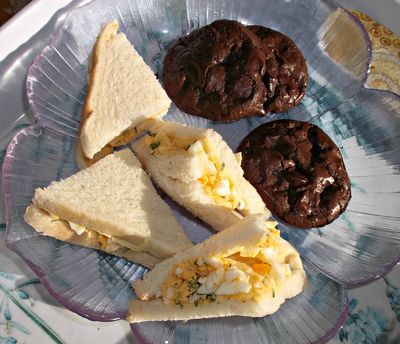 My friends and I have been, on and off, continuing our never-ending Block of the Month (fortnight) quilts and even though I have lost one of mine, here's a peek. My cold seems to be slowly on its way out. My daily naps are down to about two hours. I have yet to get my act together again, and yesterday when I thought I was doing nothing, I was in fact going to the Exercise Physiologist, to pathology and then to the hospital pharmacy to order drugs. That took about three hours. So I really did need a nap.

MrsDrWho's mum has been away and she brought me back some Shakespeare tea and a marvellous mug from Stratford-upon-Avon. 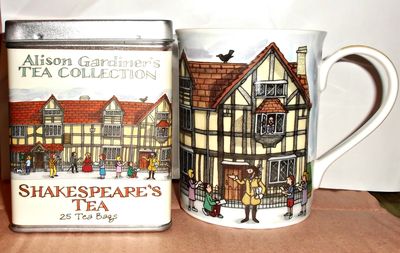 The weather has been both warm and 19*C and chilly with fog and ice on the car and grass. It is dark very early, but I am still savouring the cool weather and still wearing my Summer dresses with a light cardigan. I think I am well enoughfor Friday Food again. Though don't hold your collective breaths!!

What a lovely gift from MrsDrWho's Mum!
The quilt Blocks of the Month look tricky. You are very clever.
The sandwiches you shared with The Gardy Gardeners look delicious. Home grown goodies from the garden are always so tasty.
Gilly certainly looks quite contented with her new pillow.
So pleased you are on the mend!

Glad you are starting to feel a bit better :) Gilly looks so comfy on her bed :D not a care in the world

Glad to hear you're getting better :) The Santa outfit is very sweet ! Those egg sandwiches look delicious - well done on the garden front ! Lovely doggy pictures today, especially the face-on one of Peri - she looks very happy.

Yay, so good to hear you are on the mend again. Chris and I have also had cold/sore throat virus thingey that refused to totally go away for 3 weeks. Will have to catch up soon I may try and get to see you on your morning walk or for me it will be a hobble. Guess what? I fell into a rabbit hole (a la alice in wonderland)) whilst walking daughter's dogs and broke my ankle. Five weeks or so in a moon boot. Look after yourself and big hugs to the girls. Love Jet's Mum

I so love reading about Peri & Gilly's exploits :)

Egg sandwiches are one of the things I miss the most being a Celiac now....gluten freebreadjust doesn't cut it I'm afraid.

haha, somehow Jo Sharp and Donna Hay DO seem a bit interchangeable, now you say it!

how good is a good hottie cover? Really, a simple pleasure that cannot be denied.

hope you continue to be on the improve

Happy that you and the girls are well and doing all kinds of fun things! I've also fallen way behind in blogging and commenting, but that's OK...The tea goodies look delicious!

Good to see you are well enough for blogging again! I think you made the right decision about not needing to comment on all of the blog posts. Did you know your comments turn off after a certain time so if I am a bit behind in my blog reading, I can't actually comment on your older posts?