Reader, gird your loins as you read on.

What a lot has happened recently. Ireland voted for marriage equality. Do not fear, those of religious belief, churches can marry-or not marry- whomever they choose. I like the whole equality argument. As a woman I have been discriminated against. When I started work in the 1980s I was not allowed to wear trousers to work in my classroom unless they were part of a co-ordinated "pants suit". Nor could I have a loan from a bank without a male guarantor. I think more women than men are in favour of equal marriage rights because we know what it is to have rights denied. Yes, first worlds problems as they say, but one has to draw the line somewhere.

Marriage has a chequered history. When it was invented it was mainly to formalise the business union of wealthy families through their children. It was not a love match at all. Nor was it religious. Marriages were a civil affair, later blessed by the church. So churches should be free to hold a marriage service as they do now, which encompasses the civil requirements, but really I don't care who wants to be married. If two people love each other and want to be together, who am I to say they can't? Well done Ireland, New Zealand, Canada and England.

And maybe the Federal Government will at last remove the 10&% GST from tampons and pads. They are the only gendered health items that have the GST applied. Some of the other health items that are not taxed include sunscreen, condoms, incontinence pads, nicotine patches, viagra and so it goes. There's a petition. Maybe all the men in Cabinet, especially the Prime Minster who is a man and we are soooo lucky to have him as our Minister for Women (NOT) could say the actual words period and tampon. Pigs might fly I reckon. I know the money doesn't amount to a hill of beans, but it's the principle. 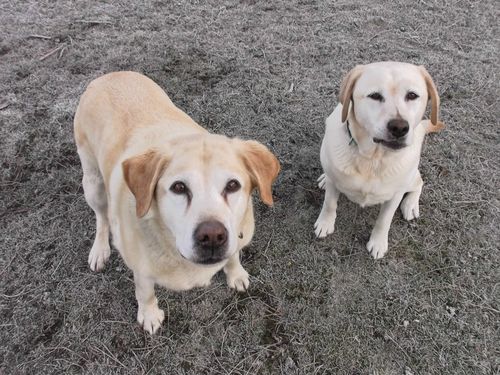 Oh look, Labradors in the ice. I am not sure why Gilly is pulling a funny face. It was -3*C the other night. No wonder we were cold. We had to break out the extra quilt and turn on the heater in the bedroom. Can't have Peri getting cold in her old age. They are joyful because they met both Rafa and Sandy this week. They all love the cold weather, it must intensify the smells. 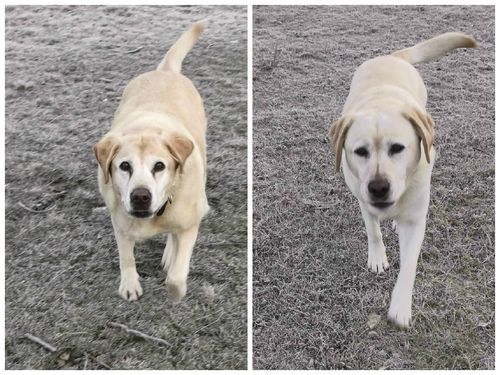 I did a little unexpected dog sitting on Monday. Wee Bessie was not well and her mum had to go to school and her dad wasn't free till 11am. I walked The Labradors and fed them and went straight round to look after Wee Bessie and Wee Jock. Bessie sleeps with her head hanging off the couch and spent most of the morning going downstairs to see if there was any food in her dish. There wasn't. Wee Jock was guarding the house, and full of ennui. 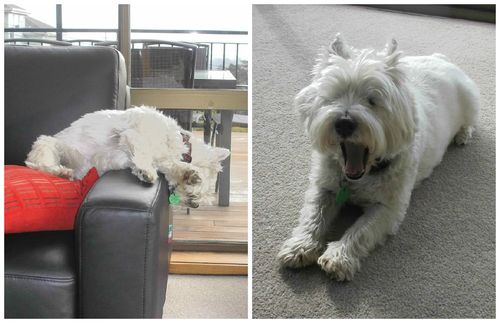 I made a very nice peach topped cake. In America it seems that a cake "from scratch" can be a novelty. I didn't use the almond essence and I substituted toasted coconut for the almonds. It was very delicious, I used the natural peach juice in the peach topping. The next day the topping had soaked into the cake beneath it, so this is a cake to make the day before. I imagine this with berries, or maybe pineapple too. Yum. 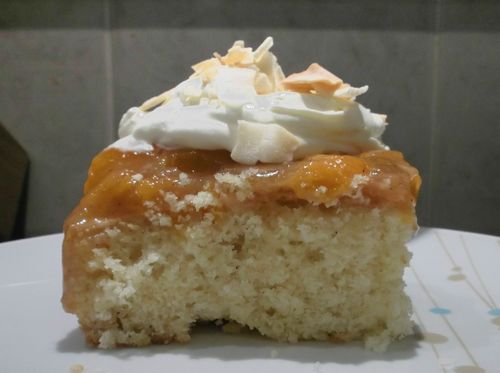 The GardyGardeners are canny OpShoppers and this week they gave me an apron made from a tea towel. Let me say, it doesn't do a terribly efficient covering job on me, but I love it. Someone has cut the curves out of the sides and bound it with brown biased binding. Very cute. The tiles are wet with Labrador footprints. we've had such heavy rain and wild winds this afternoon. 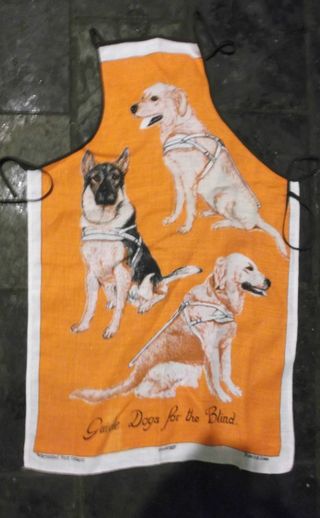 I found some iron on vinyl at The BlackSpot of DoomLight(tm). Instead of my usual thicker art-table-covering plastic, I gave it a whirl on my cheesy snack zippy pouch. Hmm, not a success. It slightly shrivelled the Twistie packet even though I ironed carefully and it was not sturdy at all. It started coming apart in two places just from being turned right side out after sewing. Still, it might be good on material and I shall try that next. It is $15 per metre and about 50cm wide. 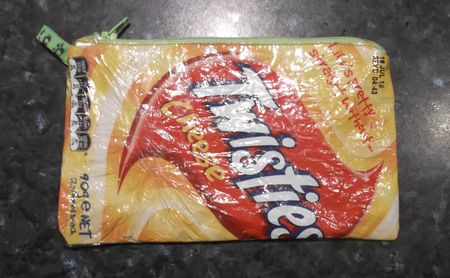 Sewing was on, off, on and then off again. Instead of sewing we had supper, a glass of wine and chatted all evening. I did make a very easy and tasty treat. So easy and tasty I baked some more today and took pictures ready for Friday Food tomorrow.

So far this week I've lost my glasses, and when I found them I also found my lost mobile and one lost Library book, I left my iPad, torch and magazines at MrsDrWho's house last night and had to go back to fetch them today. And I misplaced my camera twice today. Surely I have had a year's worth of losing and misplacing this week already?? Have not lost The Labradors. Peri and Gilly are outside eating their dinner and getting wet. Again. Wild windy wet weather is their favourite kind, and we are using all the dog Dog towels. It is still Autumn, but Winter is but a few days away. Yay!!!

not a lot of people in Canada make cakes from scratch either. First time I did was here when I made a simple victorian sponge. I think mix is just used because its usually a lot quicker, but I wouldn't go back to using a mix now after making cakes/cupcakes from scratch.

the same about tampon tax has been in the news there lately, and I just looked, and funny enough its headline news
http://www.ctvnews.ca/canada/federal-government-to-remove-tampon-tax-1.2395871

I love your peachy cake - it looks good. Brrr, can't believe how icy it is. The dog apron is very nice, and a thoughtful present.

So glad you haven't lost The Labradors yet!!

Your cake looks yummy. I agree it would be great with berries.

I hope Wee Bessie is feeling better. Certainly a funny way to sleep.

Misplacing items in our house is very common. Isabelle misplaced her dance shoes years ago and we never found them. A few weeks ago we had a $20 sitting in the car, got to netball and it had disappeared. -3 has not reached our house as yet thank goodness. I think the coldest we have had is 9. I hope you have a fabulous week.

An up and down week by the sound of it! I'd love to here how you go with that vinyl on fabric...
Hope you haven't got as much wind as we have today! XO

It has been chilly and rainy here too.

Isn't it sad that cakes from scratch are becoming outdated. I guess packet cakes are beginning to taste nicer and people are busier. I have had a few cakes at peoples' houses and commented they are nice and they have said oh it's a packet mix and I have been surprised. I still like to do it the old fashioned way.