You know you've not been on The Ravelry for a while when you click through eighty-eight pages of your Friends' activity and you don't recognise a thing. The little tags at the bottom said more than a month by the end, wow. I've yet to click through the blogs I read and and in one cold-induced accident I marked everything as "Read'. Oops!!

I have knitted something: a Dalek and Kaled for MrsDrWho's nephew, MrSingapore. He wanted a yellow and blue Dalek, so I took him to The Wool Shop to choose the colours: he actually wanted a mustard and turquoise Dalek. 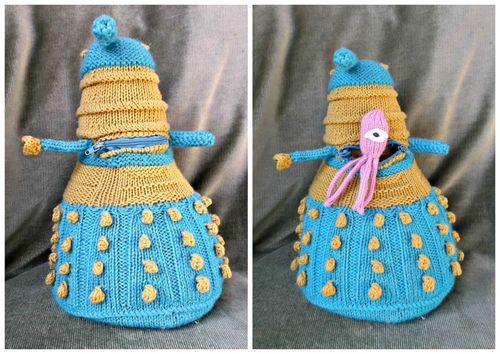 It is a bit wonky, but as it was going to be squooshed in a bag all the way to Singapore, it could be unsquooshed when it arrived. I cut a circle from the cover of a  plastic display book and inserted it into the base before I ended off. I am pleased with The Kaled, though it is a little large and I had to make the zippy pocket larger so it would fit.

Peri and Gilly are both well. We did have to go to the vet. We met an unvaccinated puppy and then over the next few days The Labradors developed The Sneezes. Last time we met a similar puppy, Harki and Peri caught The Kennel Cough, so I was a tad concerned. The vet we saw was Dr Lisa, and I taught Dr Lisa in Grade 2!!!! How exciting and even better when she pronounced them fine. They may have had just a little cold or allergy, but no horrid diseases. Peri suffered for a day or two after all the extra jumping in and out of the car. She is fine again and runs on our walk. Gilly runs too, all the way to the top of the hill when we are at the bottom. She is a fast runner!!

I've felt well enough to go out during the day, and during the evening. I won two tickets to see Dylan Moran from The ABC. MrsDrWho and I went and he was very funny. I laughed all the time and was so sad when it was over. I could have sat there for much longer and been amused. I was home by 10pm. We also went to a Costume Parade from the local theatre and musical  groups. I was home by 9-30pm.  No late nights here!!!

I've also felt well enough to cook and made a yummy caramel cake for Morning Tea at MrsDrWho's school. Mine looks nothing like the photo on the cover:

I did just two layers as it is easier to cut and serve, I am a poor icing piper so my swirls are smaller, and no toffee because it had to wait overnight to be eaten, and it was so cold the runny chocolate sauce set straight away and didn't drip artistically. I did send along the salted caramel sauce to be drizzle over the top before it was served. It was given 5 out of 3 for deliciousness!!!! 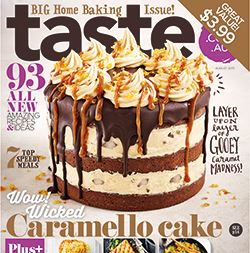 The power was off from 9 till 3-ish today, while The Hydro cut trees... or something. Since I was tired after a few days of doing things, The Labradors and I went to bed at 9 and slept till almost 2-30. I just managed to boil the kettle for a cup of tea before the power was cut. That would be the most difficult thing, to not have a cup of tea all day.

And here are The Labradors on another icy walk, the best kind according to them!!! 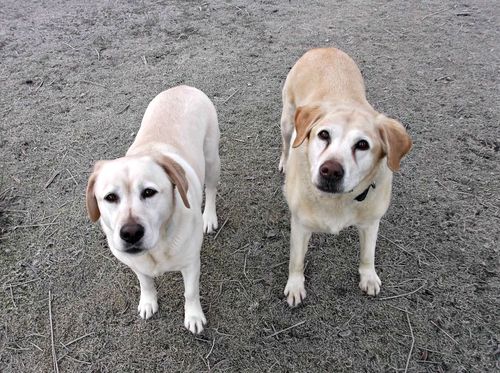 And thank goodness for the AutoSave on The Typepad Compose page because I accidentally deleted this whole post. It is definitely time for bed.

that cake look so good :D

glad the girls are ok after the coughing scare. Sky is vaccinated for everything but kennel cough just because we don't like the risks from getting it. the vet agreed, not worth the risk in her case.

hope you got some sleep :)

I love the Dalek! It's fabulous.

Nice to 'see' you again

Daleks are fabbo! glad to hear the girls are a-ok and how cool that their vet is a former pupil?!

As usual I love the photos of your girls! I miss giving my Daisy hugs and pats and tummy rubs so so much, please give your girls lots of each from me.

I'm sure the Dalek will be much loved and before too long any wonkiness will be unnoticeable.

It is lovely to see beautiful Peri and lovely Gilly looking so beautiful. I'm sorry to hear you've not been feeling too well. That cake looks incredible.

It's great to hear you are on the mend and up and about. And also that the girls didn't get sick from the puppy. Not something you need!
I saw that cake on the cover and thought it was an ice-cream cake. That is just too much icing stuff in the middle, I think your way would be much tastier.