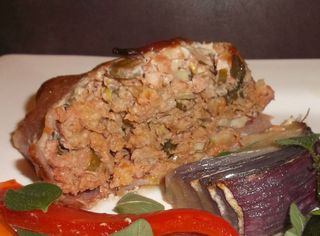 Today I really needed to use up the fresh pork mince I'd bought. So a meatloaf seemed the easiest thing for me to make. I'm still poorly, but there you go. I was cheered up today by a phone call from Lorelai Gilmore's breeder to say that he might have a new puppy for us before the end of the year. Peri is wobbly and feels well some days and not so well others: a bit like me!! We need a companion for Gilly, so I have put wheels in motion. I think it gave me a bit of a lift to know there was a puppy at the end of the tunnel.

So to the meatloaf, from the August Super Food Ideas. Easier than pie!!! Mix all the meatloaf ingredients together. Wrap it in bacon. Drizzle oil over some chopped vegetables and bake for about 40 minutes. Even I can do that. I pretty much stuck to the recipe too, only substituting rolled oats for fresh breadcrumbs and adding some chopped celery. I like celery. 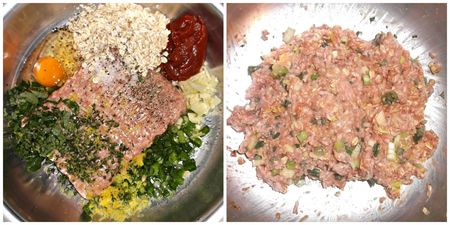 Lay the bacon out on some cling-wrap or baking paper. I used baking paper because them I could just lift the meatloaf, holus-bolus, into the baking tray. Slightly overlap the slices and then form the mince mixture into a loaf shape down the centre, long side of the bacon facing you. Though it doesn't really matter that much. Then wrap the bacon firmly around the meatloaf to encase it. 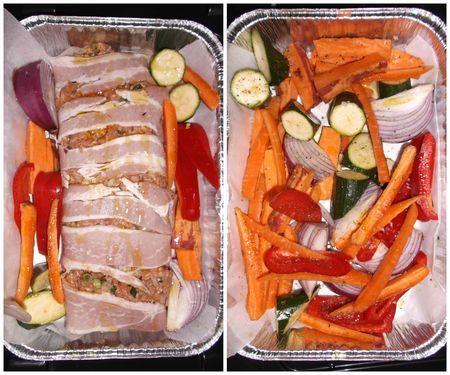 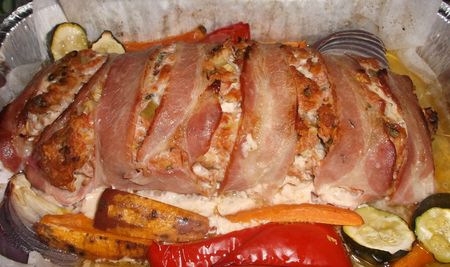 Bake for 40-45 minutes. The meatloaf should be nicely browned, and when you stick a skewer into centre the juices should run clear. If it is browning too much or too quickly, cover with some foil. Stand for 5 minutes, then slice thickly and serve with the roast vegetables. I actually think I would like mashed potato with this too. It is also delicious the next day, cold. In sandwiches. Yum!!! Yea! This looks so delicious. I'm glad you were well enough to post. Planning ahead is a tricky situation, one does not look forward to losing a dear pet family member, but adding one is a joy. Hugs and ear scritches to all of you.

Yea! This looks so delicious. I'm glad you were well enough to post. Planning ahead is a tricky situation, one does not look forward to losing a dear pet family member, but adding one is a joy. Hugs and ear scritches to all of you.

Yum! But needs gravy! How exciting about the pup, really looking forward to further news on that front :)

That looks really, thank you. (I rely on you testing new recipes for me to cook myself.)

This looks yummy! I feel a meatloaf coming on this week - thank you for the inspiration :)
I hope you are starting to feel better. Did you get the wild weather overnight that we had? It was lovely lying in bed listening to rain pounding down, and my garden looks very happy this morning.
Hugs and pats as appropriate! Kate