Home Archives Profile Subscribe
Now And Then There's A Cool Such As I
Friday Food: Bunny Cottontails

Co-incidentally, when I was looking for something chocolate and easy to make for Sewing supper, I came upon a recipe on the blog where I found the Vanilla Cupcakes last week. They turned out so very well, I decided to make some Nutella Fudge Brownies.

I always say the same thing about successful recipes, and nothing is different today: this recipe is easy and full of deliciousness. I love that the brownie is melt and mix, that it bakes in 20 minutes and that the fudge is just melted together and then smoothed on top. After a little while in the fridge it is ready. You can add a chocolate topping, but of late I have eschewed Copha and so I used a mix of butter and cream. My chocolate topping was not nice and shiny, but it was Copha-less and tasted fine. I didn't taste it, I used my Sewing friends as testers. Again.

The recipe has not-Australian tablespoons, so I have done some fuzzy conversions. I don't think an extra teaspoon of cocoa matters that much. Maybe it does?? I used Dutch processed cocoa and my brownie worked well regardless. I bought a new square 20cm/8" cake tin, with straighter sides and I am very pleased with my straighter sided brownie. MrsDrWho cut small squares and that is probably all you need as the fudge brownie is quite rich.

Preheat the oven to 175*C and grease and line a 20cm square tin. I made sure the baking paper came up high on each side as there would be a fudge layer on top of the brownie.

Mix the melted butter, sugar and vanilla extra together and then whisk in the eggs.

Sift over the cocoa, flour, baking powder and salt and fold together well.

Spoon into the tin and smooth the top.  Mine was not very thick, so I tried to make sure it was very evenly spread. Bake for 18-20 minutes, This brownie only took 18 minutes and a toothpick in the centre came out clean. Set aside to cool slightly.

While the brownie is cooling, it is time to make the fudge. I followed the recipe, and put a heatproof bowl over a saucepan of just simmering water, making sure the water wasn't touching the bowl. I think I could have just as easily used a microwave on short bursts on medium. Pour the condensed milk into the bowl and add the Nutella, choc chips and butter. Stir till all the chocolate is melted and the fudge is shiny and smooth. 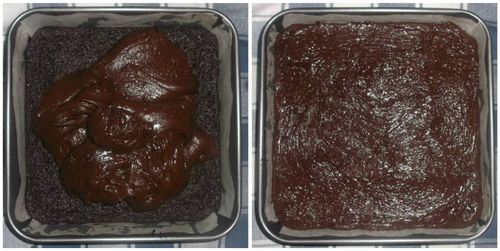 Pour the fudge over the cooled brownie. I was extra careful as I didn't want to tear the top of the brownie. Smooth it over and then refrigerate until it is completely cold. I think it took 3-4 hours, but I can't remember very well.

You can serve the fudge as it is, cut into squares.  But you may wish to add a chocolate topping, so put the chocolate and Copha ( I used 2 tspn butter and a slosh of cream instead)  into a bowl and melt gently in the microwave for 30 second bursts on a medium power. Stir till smooth. Spread over the brownie and fudge base and refrigerate until cool and firm.

You can see the chocolate topping is not shiny, but it still tasted nice and chocolaty. I think this would need to be kept in the fridge in an airtight container and would last for about a week. 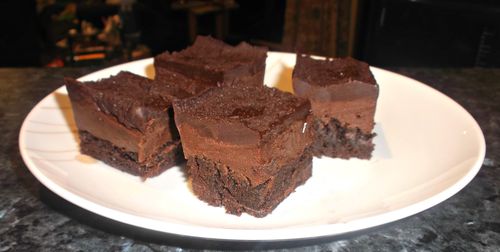 Phwoar - these brownies look amazing. I make foreign recipes all the time using equivalent Aussie measures and they seem to turn out fine.