Some People Want To Fill The World With Gilly Love Songs, And What's Wrong With That?

There could not be a better big sister for Hedy, than Gilly. Lorelai Gilmore is interested and kind and endlessly patient with the very annoying puppy who has come to live with us. She is so very happy to have someone to play with, and since Hedy can't jump up on the bed yet, she has an oasis of peace to which she can escape when the puppy is too much.

Last week we went to The Vet, just for a visit, so Hedy's first experience wouldn't be her vaccinations.

She was very reassured by Gilly, who loves going to The Vet. Hedy went out the back with the nurses and did an accidental wee of excitement. Gilly waited with me and had lots of pats and treats from the other nurses. Hedy has a nice new bandanna and didn't mind wearing it at all. It is very strange hearing what an excellent job Hedy Lamarr is doing when she puts on weight. She has gained almost 2kg in almost two weeks, which is exactly the right amount for a puppy. 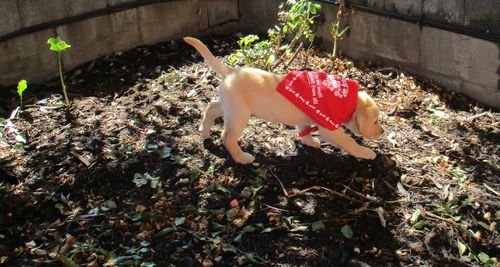 Hedy only cried a little in the car, and I think it was because she couldn't see out the windows. 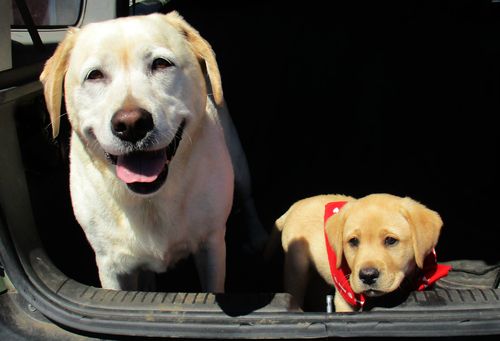 Gilly likes to play with Hedy, they love Tug of War. 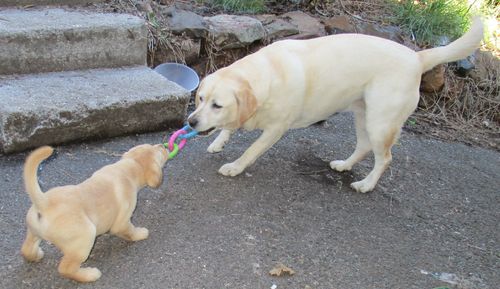 Hedy bites Gilly, she pounces on her, she growls and she inspects Gilly's belly, just in case Gilly might be her mother and there could be a drink of milk. She chases Gilly and steals whatever she has and runs away with it. Through all of this, Gilly is never rough,or cross, and never growls. I think she should be a little more assertive, but they should work it out for themselves. I don't think Lorelai Gilmore realised how much she missed Peri, until Hedy Lamarr came along.

Here are Harki and Peri, and Baby Gilly, seven years and three days ago. I think Gilly and Hedy look very much alike!! I keep calling Gilly Harki because she is so pale in colour and Hedy is caramelly like Peri. 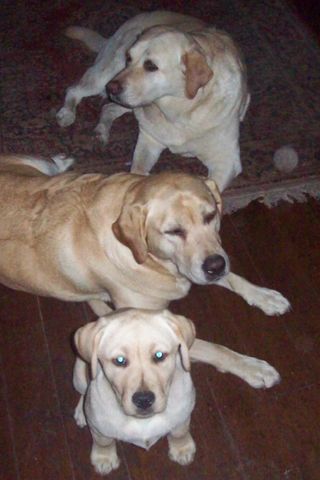 When Hedy sleeps, Gilly goes about her Big Dog business and usually sleeps. I take the opportunity to sleep as well, or to sew. I have made bags #74 and 75 for AuntieDutch and MrsDrWho respectively. I also sewed a sturdy Easter fabric basket for MrsDrWho. I found a less than Fat Quarter sized piece of glitter Easter material and used a free Craftsy pattern. It turned out rather well, and will store folded fat Quarters very nicely. 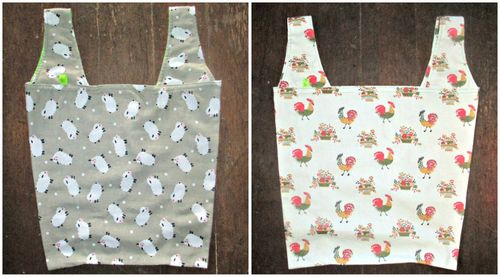 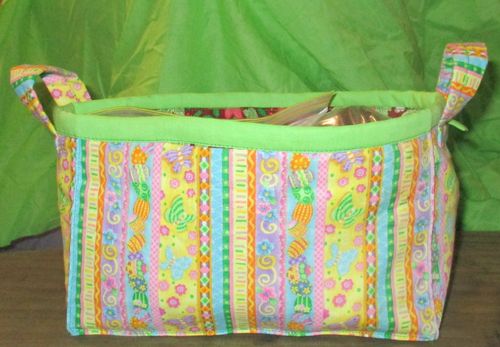 I sewed the best matching buttons I could find onto my Equinox cardi today and washed it and it is still drying, but it is done. I am very happy it fits so perfectly, well it did before it was washed!! The sleeves are kind of 7/8 and I like that. I used exactly three skeins of wool. I have about a metre left over so not exactly exactly, but so close I think it can count. I can't seem to photograph the colour, it is darker than this. 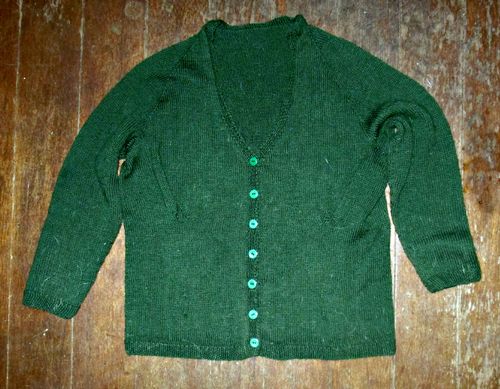 And now it is an hour and a half since their dinner and The Labradors have spent all of it running in and out playing Labrador games. They are very happy. Soon Hedy will need a sleep. Oh she's here now. Hedy knows her name and will come when she is called. She does almost all her wees and poohs outside (5 wees and 3 poohs inside thus far which is very good) and because we are home she is carried out and popped into the nice grassy area and praised highly when something good happens. Gilly is praised as well, and she gets everything first. First at last!!

We have started out new quilts at Sewing. It is the Summer BOM from 2015 at Craftsy. Here are our first blocks.

Oh, Hedy is complaining because something is not going her way: the door is too open, the water is too full or some other tiny thing is awry in her little world. Thank goodness we have the Lovely Lorelai Gilmore to be a good influence. 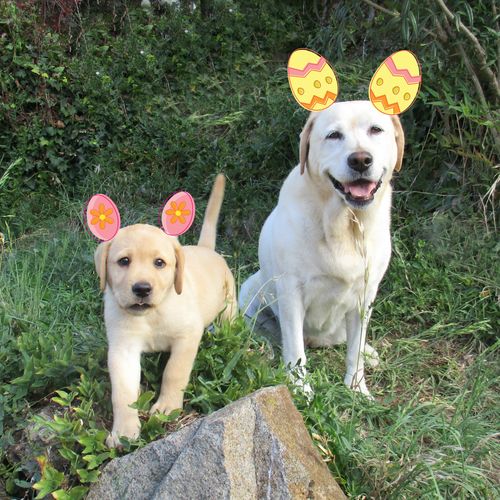 That is great seeing them play together :D

Aww I do love your photos :) Hedy is so sweet with Gilly! That sheep bag is gorgeous.

Lovely Labs. Good stories to share between their generations. Love the quilt blocks, especially the bright middle one. Enjoy your autumn weather.

Loved reading all of your doggy news. Hedy is very smart in her new bandanna.

I've been looking forward to chance to catch up on your blog and find out how life with Hedy is going! It sounds like it is going well, apart from the lack of naps! Gilly sounds like the best big sister ever being so patient. Nissa is not a patient big sister to Dominic, she runs away very quickly from him now that he is on the move.
Your cardigan looks lovely and warm. Finished in perfect time for the beginning of cooler weather!
And congratulations on your numbers staying the same too, that is always such a relief!!!

I love the pictures of Gilly and Hedy playing and sleeping together. Your green sweater is beautiful!

Beautiful dogs! I can only imagine how many pictures you had to take in order to get one of them sitting still!

hello 2paw its dennis the vizsla dog hay gilly and hedy ar so kyoot toogether!!! hedy luks like sutch a sweet puppy i wunder if my puppy sister wil ever be that sweet i dowt it!!! ha ha ok bye

The girls are so cute together!
I do like that yummy green cardi.