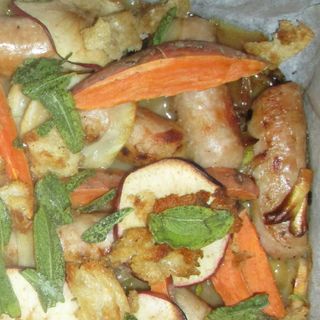 It was a lucky moment last week when I thought to organise an extra Friday Food, because I have been extra poorly this week, and had to go to the doctor and have antibiotics. I thought I felt a little better today, but then this afternoon I had a bit of a relapse. Gilly is with me, and Hedy is somewhere else wreaking havoc, but there is a recipe, so all's well that ends well!!

This Sausage and Apple Traybake recipe is from the May Taste magazine is a complete meal, and it is very Autumnal. It is also a very user friendly recipe with just one pan for browning and one tray for the oven. It can be frozen and then finished off at a later date in the oven as well.

I used the little pork chipolata sausages from Coles. They are delicious and have very little fat, so they don't spit at you from the pan. I bought the sourdough at my knitting friend's new shop in town: how cool is that??! I was able to buy fennel at the supermarket too, and apple cider at the bottle shop next door. My how times have changed. I especially like the way the crispy sage leaves and sourdough bread worked so well with the pork sausages and the apple. It is a perfect combination of ingredients. I do think it makes very decent serves: I made half the recipe but that still meant 8 little sausages per person. I think if you were serving four people, it would even out nicely and there might be leftovers too. 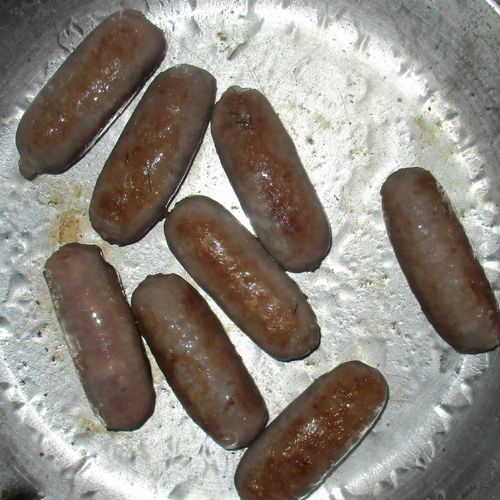 Heat half the oil in a heavy based fry pan on a medium-high heat. Cook the sausages, in batches, for about 5 minutes or until they are golden brown. Place into a large baking dish or tray.

Reduce the heat to medium and add the rest of the oil and then the sliced leek and fennel. Cook, stirring, for 5 minutes and then add to the baking tray with the sausages. 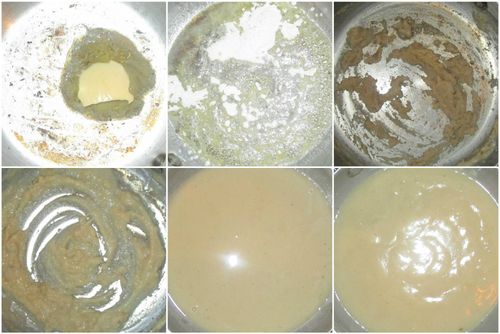 Melt 20g of the batter in the same pan and when it is foaming, add the plain flour and cook, stirring well, for 1 minute. Remove from the heat and slowly add the combined cider and stock. Add a slosh at a time, then whisk or stir vigorously and thoroughly until it is all combined. Repeat until all the liquid has been incorporated and then return to the heat and bring to the boil. I make a lot of roux type sauces and so I always chance my hand and add the liquid straight over the heat: I like to cook dangerously!!

Strew the apple slices and the sweet potato wedges over the baking tray and then pour over the sauce. I did this the other way around. It still worked perfectly well. 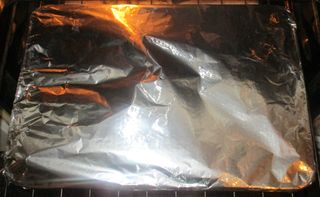 Cover the tray with foil and bake for 30 minutes, or until the wedges are tender.  Just before you remove the tray from the oven, melt the remaining butter in the pan over a medium heat and fry the sage leaves for a minute until they are crisp. Remove them to drain on paper towel or I used a clean kitchen cloth. Add the sourdough bread and cook, stirring, for a minute and add to the sage leaves.

Now, remove the tray from the over, scatter over the torn sourdough bread and pop back in the oven for another 15 minutes or so, until it is crunchy and golden. Sprinkle over the sage leaves and it is ready to serve. 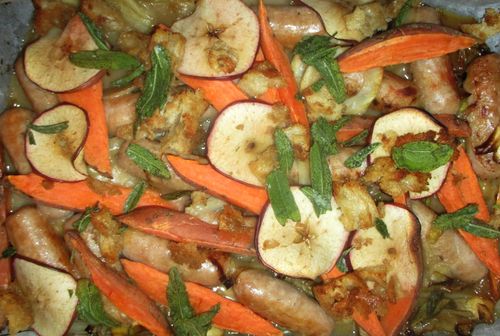 The traybake can be frozen after the first 30 minutes of baking in the oven.  Up to a month later, when you are ready to dine, heat the oven to 180*C/160*C fan-forced, cover with foil and bake for 30 minutes, then add the torn sourdough and bake for 15 minutes more and then add the sage. 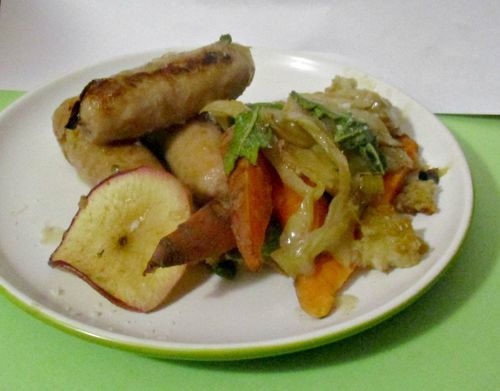 Sorry to hear that you have been poorly - hope you are on the mend. This traybake sounds wonderful and, as you say, is very autumnal.

So sorry to hear you have been poorly - I hope you are feeling hugely better now. I do love traybakes like that. I make a chicken and chorizo one which is very popular.