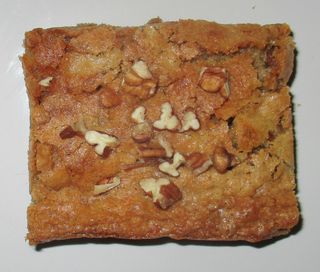 It was Nigella Week on Masterchef, but I was a tad under-whelmed by her Masterclass baking. It was a pavlova with lemon curd, cream and toasted almonds. That's pretty much an everyday dessert in Australia: pavlova and cream with some fruit. I make a pretty mean lemon curd, and I can whip up a pavlova in no time at all. I do love making Nigella's Chocolate Raspberry Pavlova, and it is always a hit at dessert time. Instead, I was inspired this week by the Yellow Team's Blondie. It has the bonus attributes of having no dark or milk chocolate, so I can eat it, and it is gluten free as well.

In the Fete episode all the teams had to make a fresh jam, but I just opened a bottle of my mum's jam and used that instead. I don't have any fresh raspberries as they are currently $56 per kilo and I refuse to buy frozen raspberries from overseas. I think it works well without the extra berries.

This is a very easy melt and mix recipe and, though there is a little cooling time, once it is all combined it bakes in 40 minutes. I think it is best served cold, as the white chocolate is a little cloying when it is warm, but each to her own!! The recipe says it serves 12 as a dessert, but I think as a slice it would make 24 pieces. 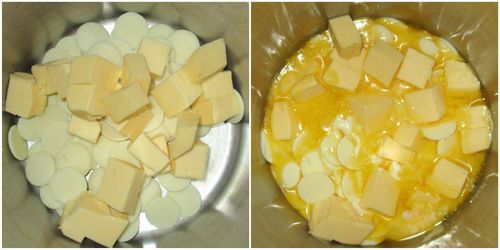 Put the chocolate and butter into a saucepan over a low heat and slowly melt together. As usual, I take it off the heat while there is still some melting to go, and then stir till it is smooth. 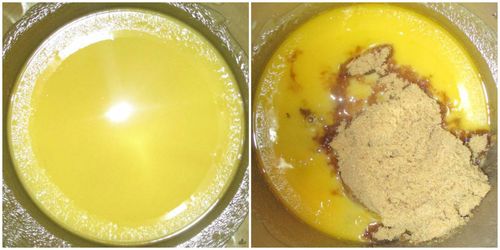 Mix in the brown sugar and vanilla extract and allow to cool slightly.

Now whisk in the eggs, and fold in the almond meal and pecans until it is all thoroughly combined. 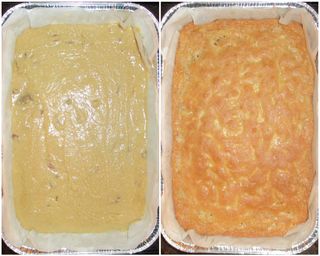 Spoon into the tray and smooth out evenly. Bake for 35-40 minutes. I turned the tray half way through and it did take the entire 40 minutes. The Blondie will be golden brown and a little darker at the edges, which will have come away from the side of the tin. Cool on a rack until cold. 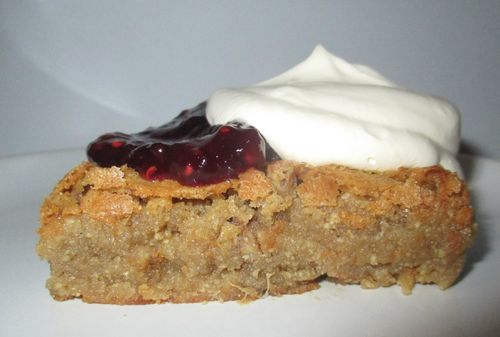 Slice and serve with jam and whipped cream as a dessert. I think it would also be nice dusted with a little icing sugar as a treat. The Blondie should keep for about a week in an airtight container.

Your blondie looks great! Ouch, $56 a kilo for raspberries. They ate at least that dear here too, but I still buy a couple of 125g punnets for $10 each week, knowing that any day now they will be be too dear at $10 for just one punnet. They aren't the best, but they do the trick.

hello 2paw its dennis the vizsla dog hay that luks pritty gud!!! maybe i wil tel dada to mayk it for me!!! altho noing dada he wood mayk it and then not giv me enny!!! ok bye