Most recent first: Hedy Lamarr has been for her first walk with Lorelai Gilmore. It all went spectacularly well. Rafa's dad and mum pointed out that Hedy is much more obedient than Gilly, who is having a little regression while she gets used to Hedy. I am just glad Hedy came back when she was called. I cheated and left her lead attached as a bit of an impediment, so I might just have a chance of catching her if she didn't come back. 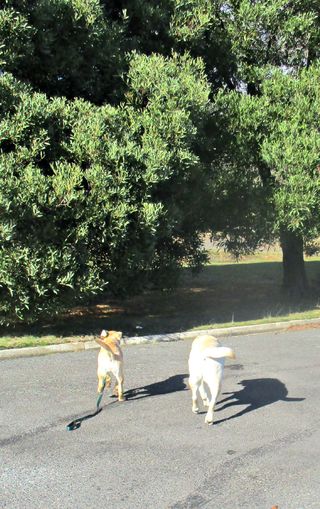 I am a tad puffed out, breathing heavily, it was Gilly and my second walk for the day. Every time we play the video, Hedy comes from wherever she is when she hears me call her name. She is so cute!!!

Hedy walks very well on her lead, though she occasionally goes the wrong way!!! 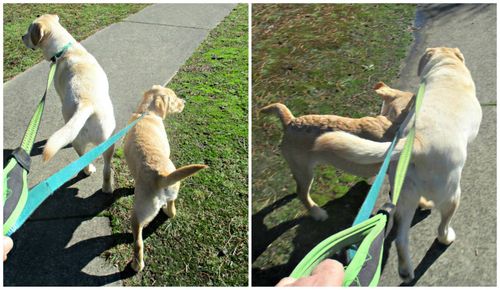 We all enjoyed our walk and look forward to more happy times at the dam together. 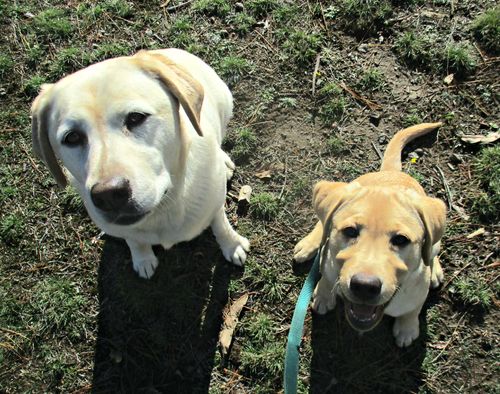 It  is also time to start leaving Hedy out of the crate when we go out. I popped up to the deli at the corner and when I came home The Labradors met me at the gate, safe and sound. 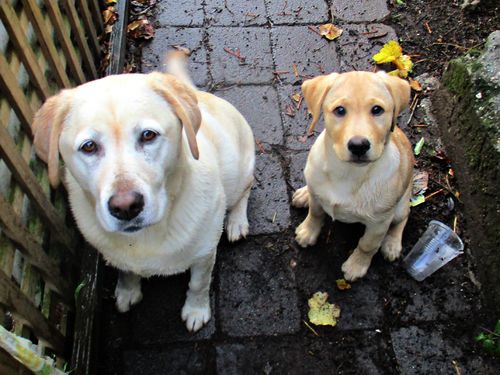 Gilly enjoyed her last walk without Hedy yesterday. She loves the cool weather and the rain, and we have had plenty of rain and an electrical storm. If only we could have the rain spread out, rather than in one fell swoop. Lorelai Gilmore can't wait for Rafa to be let out of the car so they can run very fast together. 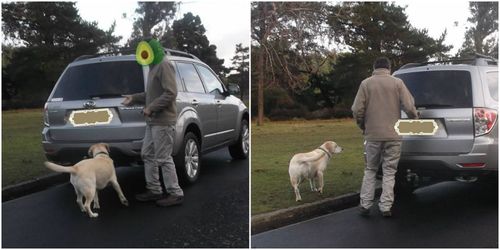 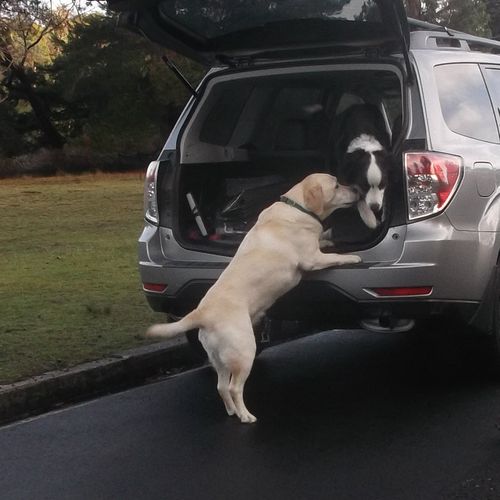 I have, no surprise, sewed some more grocery bags: bags 81-83 in fact. The first for a cat loving friend, and the next two for Mrs and then Mr Madcage. The duckies are a late Easter present!!!

I found the best sock wool ever for MrsDrWho: Rainbow Sparkles from Opal. Beautiful rainbow merges and glittery silver sparkles that are soft and don't feel scratchy at all. 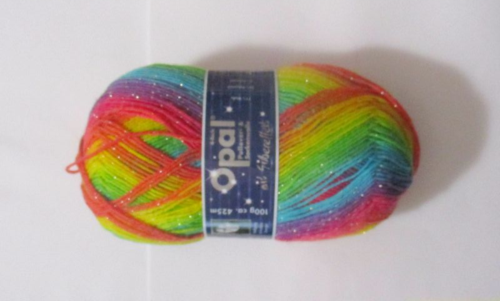 To retain the gorgeous stripes I decided to tackle an afterthought heel. There are so many variations, but somewhere I read a tip that you should knit the heel and then measure on the person to see how long the foot should be. Fantastic idea. I knitted half the stitches for the heel on waste wool, and then slipped them back on the left-hand needled and knitted them again with the sparkly sock wool. Then it was just a case of pulling out the waste wool and picking up the top and bottom stitches. I decided to make the swirl heel from the Crystal socklet at Knitty.com. Here are the Sunshine Lollipop and Rainbow socks thus far. 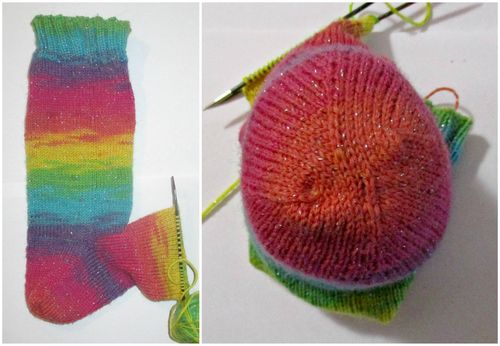 Mr Madcage also has a new birthday Forest beanie, knitted in Loyal 10ply with a twisty cable pattern. I do like the Loyal 10ply. It is soft and light and very warm and knits up beautifully. I did have a better photo, but it turned out I actually took a video and I don't know how to make a photo from a video. 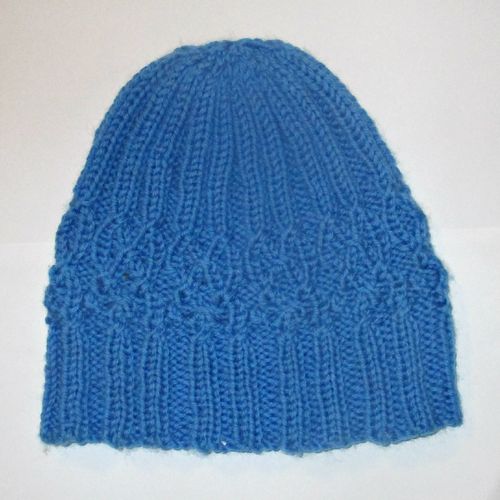 For the very first time I decided to bake something Star Wars for May The Fourth Be With You. I watched a very helpful video and then made some Darth Vader black fondant helmets. 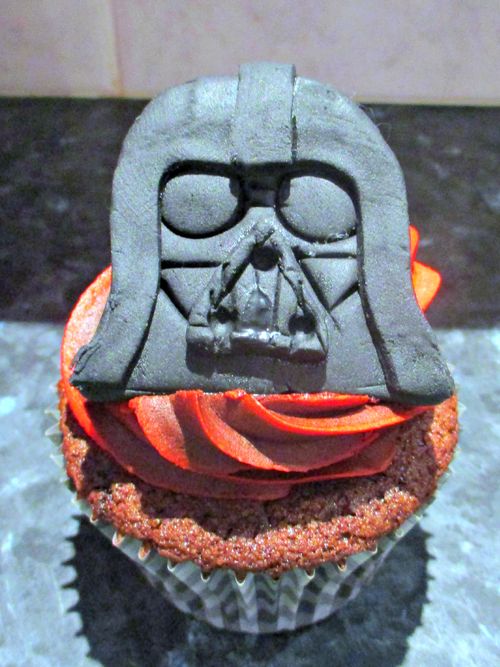 I piped swirly red and chocolate two tone buttercream onto some fudgy chocolate cupcakes and topped each with a Darth Vader helmet. I don't think they are too bad at all, and MrsDrwho said the cakes were very yummy. 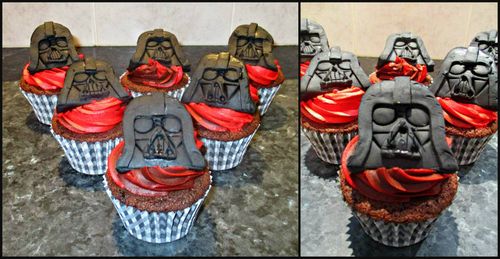 This week I am having a rest as far as possible. Last week I had a migraine, and then on Monday we had the NBN debacle- that's the National Broadband Network, where our house will be getting Fibre To The Home.  I met The NBN man a few weeks ago when he came to confirm that we will have the cable from the pole outside to the roof, as our house is built on a giant rock and there is no way to dig a trench. Easy, I thought. Ha!

During my five or six phone calls and Live Chats I was assured that the technician who was to come on Monday would do the outside and inside installations. I talked to my friends who have The NBN said they said this is not the way things are done, but I checked and checked again. On Monday the technician turned up and he was just the Inside Person. The Outside People had not done their job yet. The Inside had not talked to The Outside and so nothing could go ahead. Well, after all this, I ended up telling the ISP not to even talk to me until they had it all sorted out. And I shan't believe them even then, since I have had two separate communications, stating two different dates and times since then.

This week I am also going to drive an automatic car. I have only ever driven a manual car, but our car is too small to take two people and their suit cases to the airport. I am going for a drive tonight, just so I can get a feel for the car and learn it's super modern things like reversing camera and other things of which I know nothing!! Hedy is already having her post-lunch nap in her crate, Gilly is asleep on the  couch and I think a nap is definitely called for after all the tooing and froing.

Hedy looks like such a happy puppy, love the little bark :)

that rainbow wool is gorgeous!! and your cupcakes look great :)

I drove a manual for 11 years and then got an automatic when I was pregnant with my daughter. It just makes life easier in traffic, although it takes a bit to get to not going for the clutch all the time. Your Darth Vader cupcakes look great. How adorable is Hedy, what a cutie pie.

That sneaky sock heel business sounds a bit tricky! And I love the pattern for the beanie, might have to add that to the favourites as a potential for Keenan's 2017 beanie.

Hedy is just so clever going for walks and runs with Gilly and coming back when she's supposed to. How cute. She is looking more like a tween aged dog now than a puppy.

And on a side note, I love that you used an avocado to block out Rafa's dad's face haha.