Rolling In The Sleep

I have been sleeping. I have been sleeping for five days in a row. We went out for walks, and supplies, but other than that is has been all sleeping. The weather has been cold, we just had the coldest May day on record, so it has been all hotwater bottles and extra quilts on the bed. Today is the first day I feel un-tired. We still had a nap this afternoon, but I went out to do some shopping and left Hedy Lamarr out of her crate to run free in the house and back yard with Lorelai Gilmore. I did shut the hidden dining room door and the hall door, but when I came home Gilly was waiting at the gate and Hedy came from inside when I called- she was probably asleep in her crate!!

Consequently, not much else has been happening. Hedy goes for a walk off her lead. She comes when she is called and runs like the wind. So fast that she is a blur. Gilly is poking out her tongue. It is the season for rolling in something smelly and eating it as well. 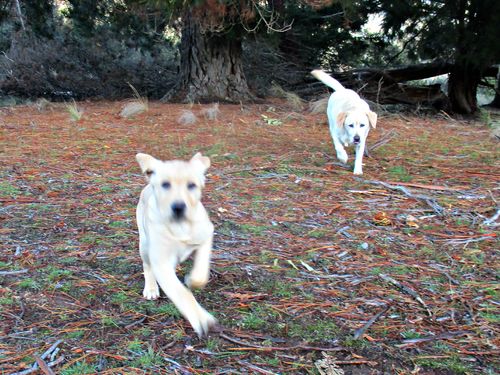 Hedy has met Rafa the Border Collie and Sandy the Failed Guide Dog. They have both been champions. They have put up with a wriggly, licky puppy with hardly any growls at all. And if there is a little growl, Gilly appears from nowhere and puts herself between them and Hedy. What a good job she does. And all The Labradors... 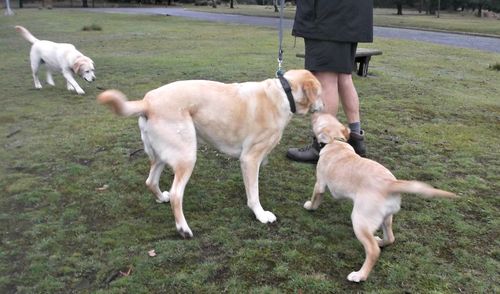 Hedy is so cute and she is such a good girl. Her worst fault is stealing balls of wool, and that is because I haven't put them away. She has grown out of her cute dark green baby collar and has a new one. I felt guilty, so I went back and now Gilly has a matching collar. Gilly woke up on the couch next to Hedy Lamarr the other day and she wagged and wagged her tail, and licked Hedy's paws and belly. I think Hedy is settling in well. She doesn't bite me all the time either, which is nice!! 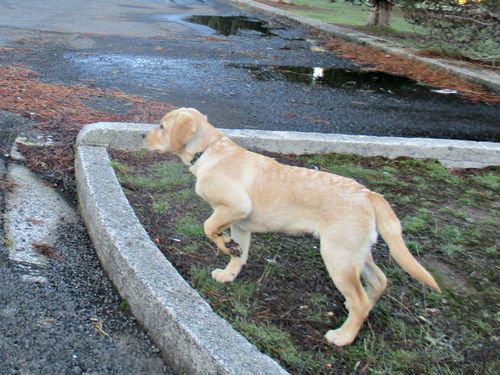 I have almost finished MrsDrWho's birthday socks. I have made both the afterthought heels and knitted past where I think I should start the toes. Which is annoying, but sensible because it is a new style of sock and I need to ask her to try them on. The stripes match so well, I am so chuffed. 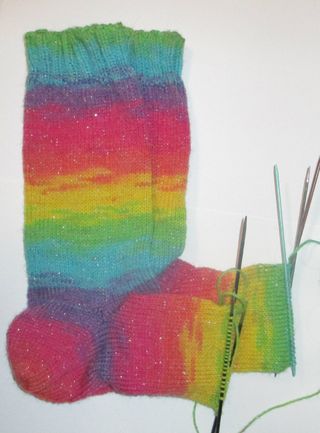 I bought myself a present today: two Pyrex bowls in a gorgeous aqua colour. They were on sale for half price so I treated myself. The container with the lid in already filled with some salmon pasta sauce, which I ate from the cute bowl for my tea. 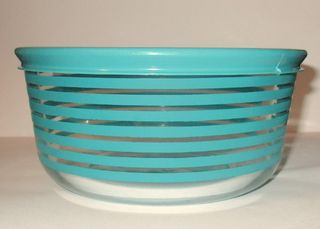 I drove MrsDrWho's automatic car with no problems at all. I feel slightly silly that I was so worried. Now I feel confident that I could drive any car at all. She had a lovely trip away and if I need to drive the car to the airport again I will definitely be available.

Well, our house has been quite boring. I watched the end of River, a TV show on The Netflix and thoroughly enjoyed it. I am making my way through The Night Manager now.

Tomorrow I plan to start knitting a corgi for The GardyGardeners. They have always had corgis and as they leave for The Mainland soon, a corgi will be a nice keepsake for them. 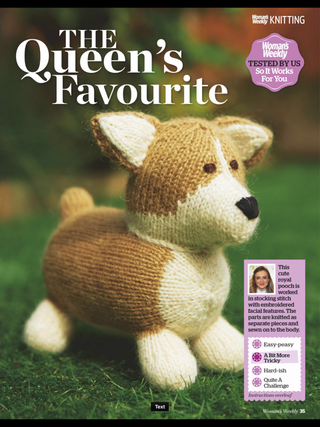 Hedy has grown so much already. How nice that she is behaving more too. I love the little corgi pattern. I love sparkly socks. They look quite nice. I think yesterday was the coldest day we have had here in a long time. I suppose winter is on its way now.

I need to learn how to drive manual for here sine I only drove automatics in Canada and not that many to begin with lol most cars here are manuals so need to learn just waiting on getting a learner license.

Hedy looks so cute meeting the other dogs. The neighbours have a 12 weeks old lap/spaniel cross that Sky sniffs through the fence and wags her butt and tail and even play bows. Odd to see since she usually ignores puppies

and if a person needs to sleep, I say sleep as much as possible :)

Sounds like Hedy is growing up! And having a fabulous time doing it.

The socks are wonderful.

I can't wait to see the corgi.

I'm so pleased the driving of the automatic car went well.

How sad that the GardyGardeners are leaving! They will love the knitted corgi, I'm sure.
I've been super tired too - maybe it is the change of season? I hope you don't have any germs to go with it. Here we are all fighting colds and coughs, including poor Dominic.
Hedy is growing up to be such a lovely little lady. And Gilly is such a responsible big sister.
I cant believe how well the sock stripes match! Very impressive.