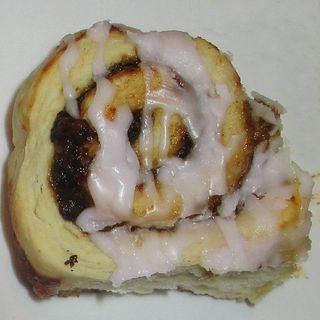 What to bake, what to bake?? I have made a luxurious chocolate mousse cake, and some brown sugar and oat muffins too, but MrsDrWho seemed delighted with the pink iced sticky date scrolls. So much so that I made two more batches for Sewing on Wednesday. I found these in the "date" feature in June's Recipes+ magazine. They are just so cute and it does really matter which way the icing stripes run. Believe me, it really does.

I just used my own scone recipe, which isn't really a proper recipe at all. Lassie Nan, my dad's mum, taught me: basically use two cups of self-raising flour, rub in a knob of butter and when it resembles breadcrumbs, add enough milk to make a sticky, but not too sticky, dough. I can't ever tell how much milk I will need, I just know when the dough feels right. You may have a good scone recipe you like to use.

I read a clever tip somewhere, can't for the life of me remember where, but rub a little oil on the knife before chopping the dates and it stops them sticking- very helpful. I added a few more dates to the date mixture as I felt it was a little too runny, and that's about it. Being scones, the date scrolls will only keep for two days in an airtight container. MrsReno warmed her sticky date scroll in the microwave and ate it with vanilla ice-cream: they're very versatile!!

NB Rather sensibly, an Australian tablespoon is 20ml, or 4 x 5ml teaspoons. 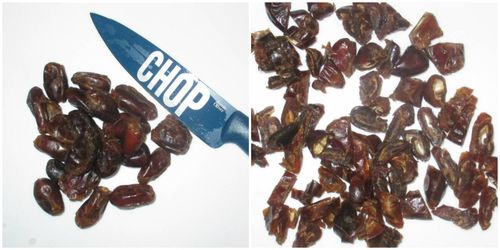 Lightly oil your knife and then chop the dates roughly.

Put them in a small bowl and stir through the brown sugar and bicarb soda. Then pour in the boiling water and set aside for 20 minutes. The dates should soften, but I mashed them half way through with a fork to speed the process, because I am an impatient cook sometimes.

Preheat the oven to 220*C/200*C fan-forced. Put the flour in a large bowl and rub in the butter. It should be easy and if you give the bowl a little shake, any lumps rise to the surface and can be annihilated. Make a well in the centre.

Pour in almost all of the milk. Leave a little just in case. Gently mix to combine. Don't work the dough too much. I found that there wasn't enough milk and there was dry flour left in the bowl. I added some more milk, a few teaspoons at a time, until the dough was a little sticky, but didn't stick to my hands too much. 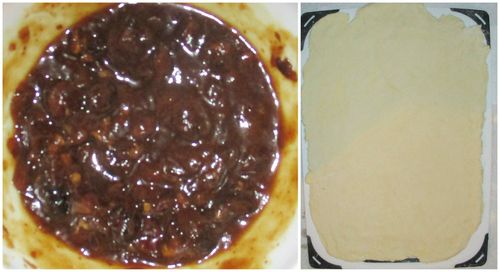 Once the dates are softened, roll out the dough, or just press it out with your fingers, to be about 35 x 20cm.

Trim off the raggedy edges and then spread the date mixture over the scone dough, making sure to leave at least a 2cm border all around. Or vice versa. I think it needs a larger border at the joining edge.

Starting at the long edge nearest you, begin to roll the scroll. The beginning should be quite tight, and then continue rolling firmly until you reach the other long edge. 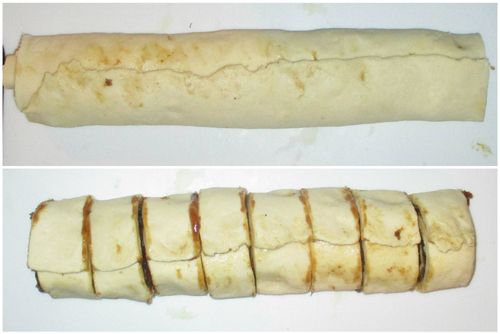 Press the edges together to join and then trim the ends. You don't want to be eating dateless date scrolls. Then cut the roll into 8 equal parts. 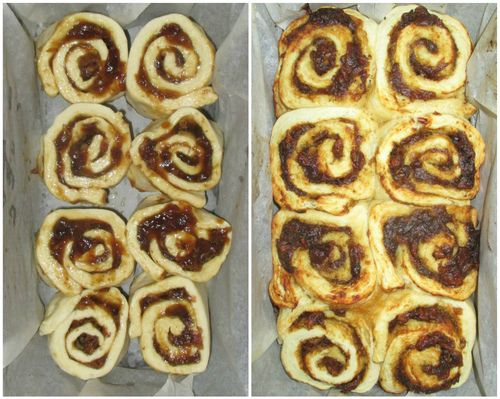 Carefully place them in the loaf tin, with the cute scroll side up. Bake for 20 minutes, or until the scrolls are golden and sound hollow when you tap them. Set aside to cool. 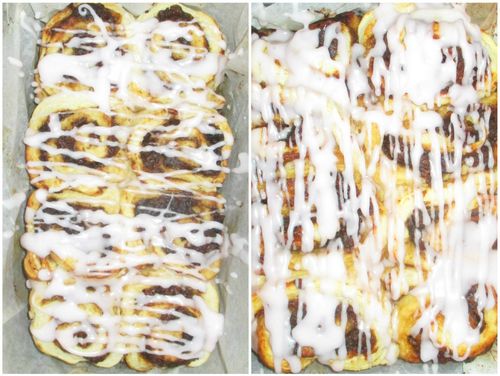 Check the scrolls are cool, if they are too warm, the icing disappears as it melts. Mix the icing sugar, boiling water and food colouring together to form a reasonably runny icing.  It should fall easily from a spoon so that you can swoosh it across the sticky date scrolls.  I think it is Very Important to ice East to West, rather than North to South, as evidenced above. I gritted my teeth and iced the second batch The Wrong Way. I know they will taste the same, but they look wrong.

I loaded up my spoon with icing, and tilted it over the bowl to start it off. Any blobs at the start will fall off into the bowl. Then with lightning speed move the spoon over the scrolls and swoosh from side to side.

Then pull them apart and serve with a nice cup of tea or coffee. Eat them warm or cold, with ice-cream or just as they are. They are deliciously sticky from the icing and the dates!!! 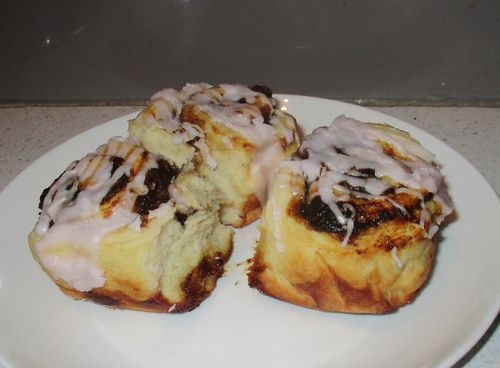 I'm like a Labrador drooling at the thought of these!
Might have to give them a go.

So very tempting! Your baking is always inspiring.