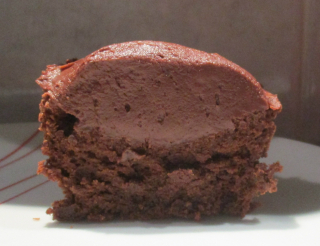 Delicious magazine is celebrating its 15th birthday. I used to collect Delicious, but now I use the Zinio for Libraries app to read it on my ipad. This month I was very interested in the 4 ingredient chocolate cupcakes because, well, 4 ingredients and chocolate cupcakes. The 4 ingredients are chocolate, cream cheese, eggs and brown sugar. I was lucky enough to use proper farm eggs, and the whites whipped up in no time flat. There are actually 6 ingredients, but they haven't counted salt and water. I made half the recipe and 15 cupcakes and the recipe says a whole batch is 24, so you might have 30. MrsDrWho tasted the cupcakes and said they were unusual, kind of like a baked mousse. In fact when they came out of the oven they were quite puffed and then sank when they cooled, some even developed a hole. I don't think that really matters.

Once again, the recipe gave the total of the ingredients, but you have to read the recipe really carefully, because you don't use them all in the cupcakes, they are used for the frosting too. I will give the amounts for one whole batch, separated into cakes and frosting.

I was not very successful in making the frosting lovely and shiny as it is in the magazine photo, but my bakes often suffer from being refrigerated and transported. I ended up just spooning on some frosting rather than piping it.

I think that is all really, other than the cupcakes being fine for gluten-free people!! I don't think these will keep for very long as they were not terribly moist, and they went a little hard when they were kept in the fridge.

Preheat the oven to 150*C and line muffin trays with paper cases. 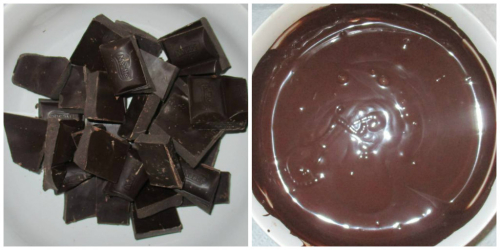 For the cupcakes, melt the chocolate over a double boiler or in the microwave and set aside to cool slightly. 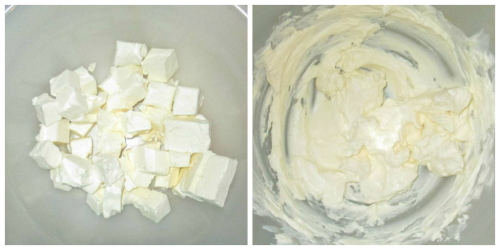 I cubed my Philly cream cheese earlier and put it out in the sun in a big clear tub, with the lid on!!  Once it is softened, beat it with a spatula or spoon until it is smooth.

Then pour in the cooled chocolate and beat together. Add the egg yolks and sugar and mix well to combine. 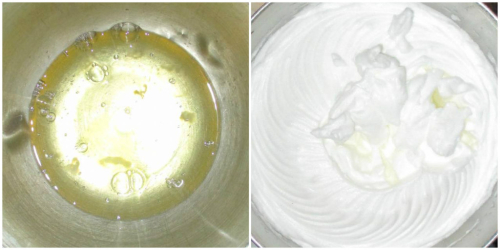 Whisk the egg-whites, by hand or with a beater, until stiff peaks form. There looks to be some yellow in the beaten egg-whites, but it is just a trick of the camera. Any yolk at all in the egg-whites will prevent them from whipping up.

Spoon or scoop into the paper cases, I filled mine to about 3/4 full. Bake for 20 minutes, or until a skewer poked into the centre comes out clean. I found it took 25 minutes for my cakes to cook. Set the cakes aside to cool completely. 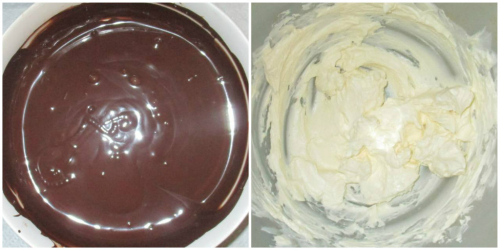 Make the frosting by melting and cooling 200g dark chocolate, and softening and beating 500g of cream cheese. 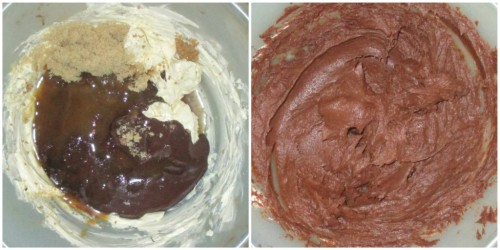 Beat the chocolate and cream cheese until smooth and then add the sugar, water and salt. Beat again until smooth. The icing will be thick and they recommend chilling it to thicken. This is when mine went dull, instead of shiny.

Spoon or pipe the icing onto the cupcakes and you are done!!! 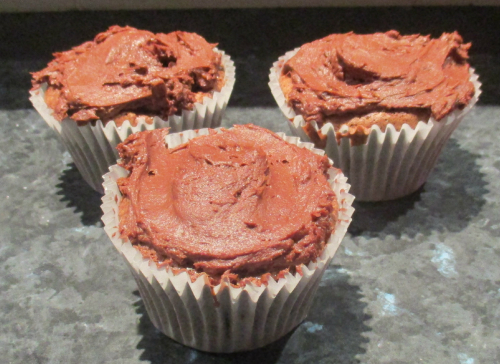 These look super, and bonus that they are gluten free.