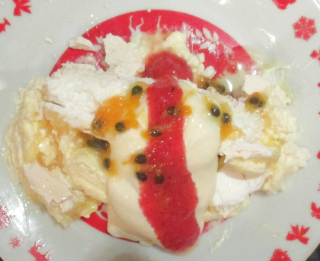 Frankenstein desserts are all the go, and while I am not always a fan, I thought the combination of pavlova and lemon cheesecake sounded delicious. This was the cover recipe on the September issue of Taste Magazine, but you can find it online here now. The pavlova needs to be made the day before and cooled overnight in the oven and then the cheesecake added on top and the dessert refrigerated for at least 3 hours. In truth, you could easily serve this as a frozen dessert, which would have circumvented my problem- read on.....

I found the recipe annoying because it doesn't separate the sugar into two parts: one for the pavlova and one for the berries. I had measured it out could not be bothered doing it again, so I just made a 4 egg pavlova and had some extra small pavlovas. The recipe also lumps the toppings in with the general ingredients. I have separated them into better categories. I know I am supposed to read the whole recipe, but I just expect it will be organised the way I like!!!

I used fresh local strawberries instead of raspberries. The raspberries are either frozen, imported from overseas countries where they don't have strict food laws, or unbelievably expensive right now. MrsDrWho and MrsReno said strawberries were fine. I used posh lemon curd from the supermarket, and I added the zest of the lemon I juiced to the cheesecake, because I don't think you can have too much lemon really.

Although I followed the recipe faithfully and accurately, and refrigerated it for 6 hours, the cheesecake portion didn't "set" and oozed over the sides of the pavlova when I removed it from the tin. It still tasted the same, but didn't look spectacular at all. I didn't bother with the white chocolate decorations as this recipe involved many steps, and I was tired by the time it was in the fridge. You can refer the the recipe online for the instructions. 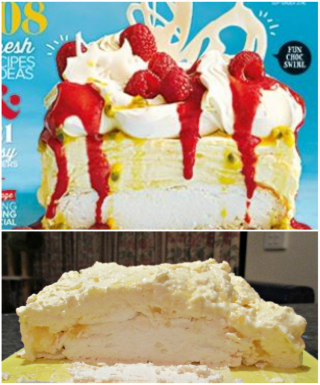 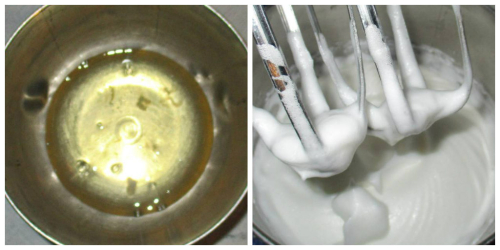 I always wipe the metal mixer bowl and the beaters with some lemon juice or vinegar and it is vital that there is not a skerrick of egg yolk or the whites won't whip properly. Whip the eggs until they are just holding their shape and then add the sugar a tablespoon at a time. It generally takes about 10-15 minutes to properly incorporate the sugar. The eggs are ready when you rub a little bit of the mixture between your finer and you can't feel a single grain of sugar: it is smooth and glossy. 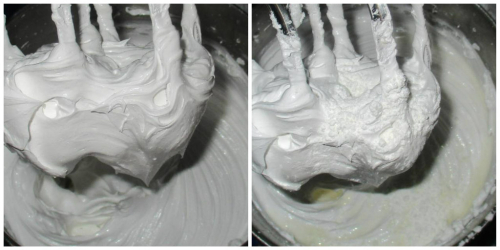 Spoon into the tin and smooth the top and bake for 1 1/2 hours. 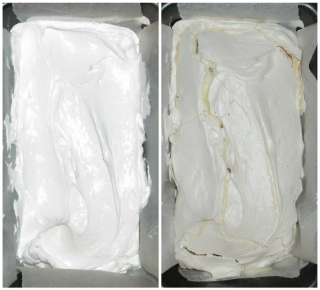 Turn the oven off and leave it to cool overnight. If needs be, you could make the pavlova early in the morning on the day you want the dessert.

Before you start making the cheesecake part, put the the warm water in a small heatproof bowl or glass and sprinkle over the gelatine. Place this bowl/glass into a larger heatproof bowl and pour in boiling water until it comes half way up the sides of the smaller bowl/glass. Stir every minute for about 5 minutes until the gelatine is totally dissolved. Set aside until it is at room temperature. 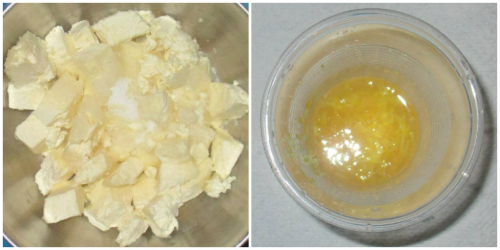 Meanwhile beat the room temperature cream cheese with the sugar until it is smooth. Add the lemon juice/zest and beat briefly to combine and then finally beat in the cooled gelatine mixture. 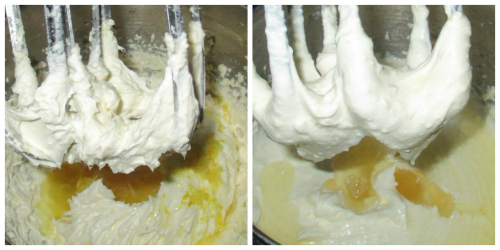 In a new bowl, whisk the thickened cream until it soft peaks form. Fold in about 1/3 of the cream cheese mixture and then add the rest. Fold gently to combine. Swirl through the lemon curd. The idea is that you will see the swirls of curd in the finished cheesecake.

Spoon onto the pavlova, even out the top and then cover and refrigerate for at least 3 hours. 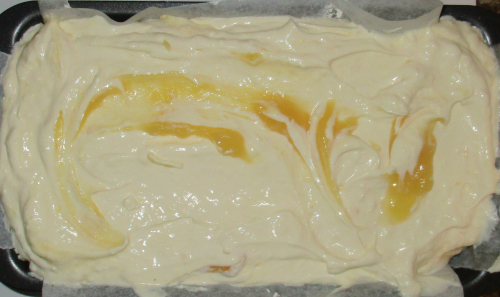 Prepare the berries by defrosting them if they are frozen, and blending them with the sugar. You could also push them through a sieve. I don't mind the pips in berries, and there is passionfruit, which is basically pips anyway. Whip the creams till soft peaks form and then assemble the dessert. 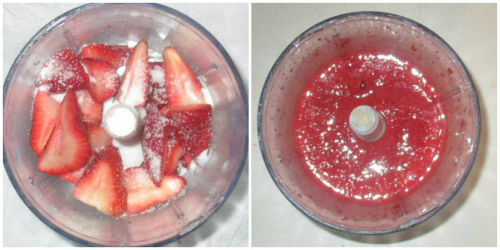 Gently remove the dessert from the tin, spoon on the cream and pour over the berry sauce and passionfruit. You can add some extra berries and white chocolate shapes too. I chose to put a slice of the sad squished dessert on a plate and then added the cream and fruit on top. I wish you better luck than I had with the gelatine setting, but be assured the taste was not affected at all. I think this would be a fabulous frozen dessert for Summer, especially as it can be made beforehand and served whenever you want. 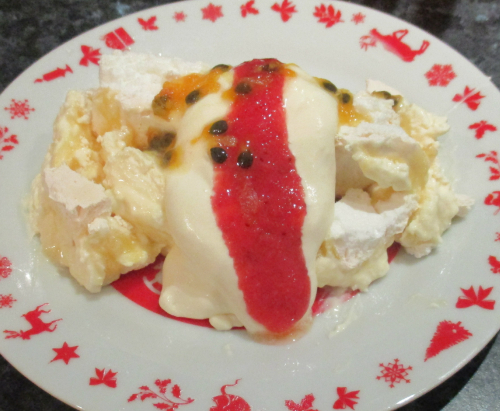 Two of my favourite desserts in one - it looks magnificent!

Divine! simply divine. I must now go try to find passion fruit. The spring must be a welcome event.
Your cooking posts are always such an uplifting part of my week. Merci.

I am commenting in totally the wrong post but oh well. I am so far behind on your news that I had to go to the second page to find where I was last up to!! I'm so sorry to hear Gilly has been unwell. She is very lucky to have you as her mama as it sounds like you are taking excellent care of her and that she is doing really very well considering!! Our pets do cause us lots of worries don't they? I also had a more minor version of your dreadful sinus infection so I feel part of your pain. I did book an emergency dental appointment because I thought I not only had a sinus infection but also surely I must have an abscess in my tooth it was so sore. I haven't ever had the tooth pain associated with sinus problems. My dentist gave me some antibiotics and my gp had already given me some so combined they worked and I didn't have to take the dreaded horse tablets. I hate the horse tablets!!!

I hope you and the pups all stay nice and healthy from here on for a big long stretch. And I can't believe how much Hedy has grown!!!