Oh I am so tired. I am beyond tired. Today we went for a walk and unexpectedly met Rafa and his dad. Hedy played so much she had to have a little lie down. 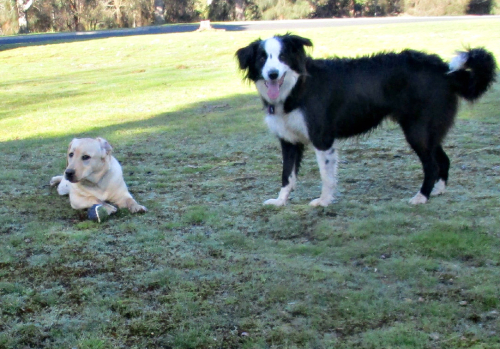 Then I had my hair cut and this afternoon I went to be a Patient-Partner at the Hospital. Seven people searched for, found and then palpated my spleen.  An enlarged spleen is a rarity, so the almost newly minted doctors and their tutors were excited to feel my spleen. I also had to exert myself so that they could hear the murmur in my heart. And get on the bed, off the bed, several times. I want to go to sleep, but I know if we go to bed now, I shall be awake in the middle of the night again.

Lorelai Gilmore is feeling very well. We met a new puppy, Sebastian, but I don't have a decent photo of him. Hedy, Sandy and Rafa played with him. Gilly?? No, Gilly met Sebastian's human and ascertained immediately that she had treats in her pocket. Gilly has never met a pocket full of treats she doesn't love!!

Lorelai Gilmore has her "asking for a treat" face and paw down pat. Look at that face. 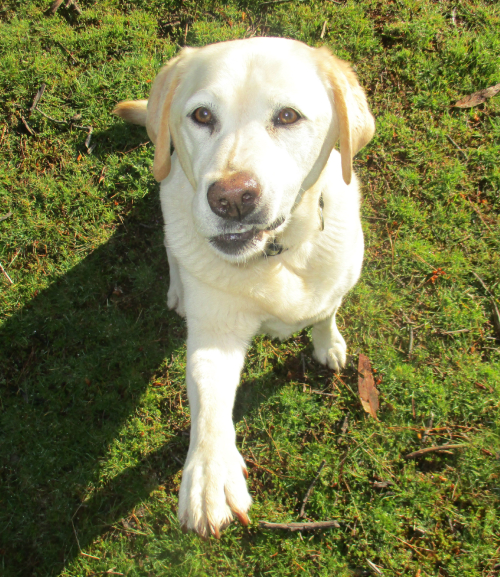 When Hedy bites Gilly, I squirt a little diluted apple cider vinegar at her. I only had to do this a few times before she realised what it meant. After that I just had to show her the bottle and say "No!". Unfortunately I left the bottle on the desk and Hedy wrought her revenge quickly, chewing off the top.

I have been knitting something from Craftsy's new free Autumn Knit-along . They say Fall, I say Autumn. It is a gift, so I have not shown it as it truly is. I am very pleased though. It was a fun knit and looks great too. 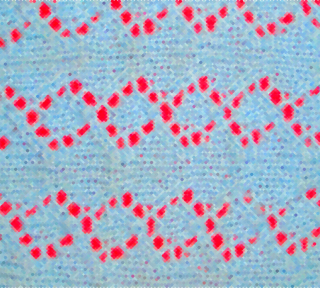 I've also been trying to eat more vegetables. Tonight I had peas, sweet potatoes and potato. Yesterday I had some carrots, Hasselback potatoes with bacon and broccolini (not shown).

I am tired in other ways too. A female politician has said she felt bullied by a male politician. The male Premier has decided there is no case to answer and the male politician apologised for his tone, but not the bullying. Now he is saying that he is the victim. How is it that he seems to have turned the whole thing around and made it about him?? The Premier says there should be mediation, but I think there should be a proper third party inquiry. I don't believe that putting a bully, and the person they bullied together is a good idea. I think it can give more power to the bully. No-one really know what happened, but the male politician threatening to sue anyone who discusses it seems wrong.

It is still a man's world.

Today is International Day of the Girl and a survey released shows that two-thirds of girls believe that gender inequality is a persistent problem in Australia. 40% say they do more chores than the boys in their family and only 16% feel they are valued for their brains and ability. Things have changed, but not enough. It seems that because girls have been given the same opportunities as boys, boys feel they have had something taken away from them. And when women are given equal opportunities to men, men also feel that they have lost out: I am speaking generally. I think of the way Julia Gillard was, and Hillary Clinton is, treated so poorly by men and by the media. I despair of old rich entitled white men. Women and men are certainly different, but deserve the same opportunities and respect. A few weeks ago I found a credit card on the road behind my parked car. I took the card to the police station and I had to fill in a form. The form was all "he", "him" and "his". Not even a pretence of "s/he". I do feel not as equal when simple things such as government forms only have male pronouns. I would like to see all forms with just female pronouns and then tell men that these pronouns are inclusive. I don't feel included.

What else can I talk about?? The Plebiscite for Same Sex Marriage. I cannot for the life of me work out why I can have a vote-that-might-not-even-be-worthwhile about same sex marriage, but not one about going to war or the deficit. It does seem now that The Plebiscite might be off. I think couples should be able to be married in a civil ceremony. Everyone should have a civil ceremony and then they can have their marriage blessed, or whatever, in a church if that is what they choose. And churches should be able to refuse if they want to. I don't want to interfere in their religion. I can't think of one good reason why there should not be same sex marriage. The arguments used against it sound oh so familiar to those used against African Americans, against our Aborigines and against women. And saying that children deserve a mother and a father?: even fifteen years ago in my classroom most of the children's parents were no longer together in their original family unit. There were single mums, single dads, people who had remarried, people whose spouse had died, the list goes on. I believe children are better off with two people, or one person, who loves them, rather than with two people who hate being together and make their home an unhappy or unsafe place.

And I just can't even start thinking about Donald Trump.

There. I've managed to while away an hour. Time for a cup of tea, maybe another episode of Fringe and then sleep. Tomorrow there is no walk, we don't walk on Wednesdays, so I plan to sleep all morning.

And now I plan to press "Publish" and be damned.

If Drumpf because POTUS, we are screwed :/ or obliterated in a nuclear holocaust

Labs and food, 2 words you hear a lot. they hae perfected that starving look lol

I have to agree with all your comments and I hope you all have a lovely sound rejuvenating sleep and a relaxing day to follow...thankyou for sharing your beautiful doggy faces once again <3

I hope you had a wonderful sleep. I work in IT when I can and the gender stereotyping is horrible :(